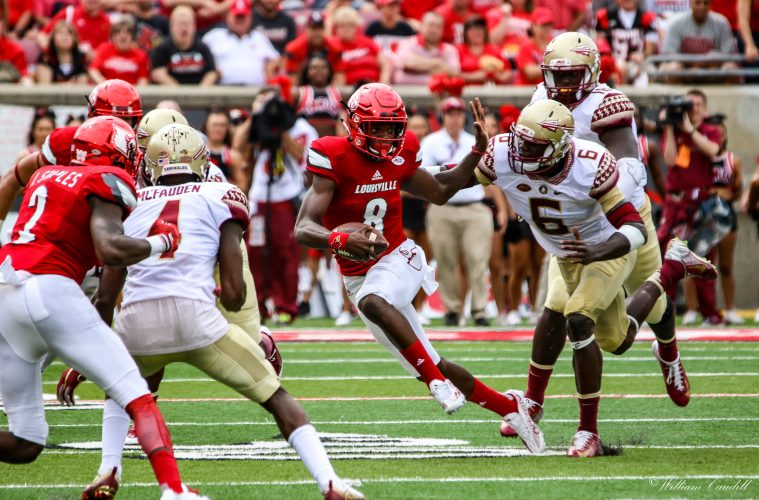 I like to tell people that I have an ACC degree, but I paid Conference USA tuition.  We’ve all seen this school transform over time.  In a lot of ways we’re lucky…….. we can appreciate what we have.  But the University of Louisville & its fans have struggled an uphill battle through the national landscape of college football since the beginning.

It’s hard to understand how the spark began.  There is a lot of credit given to Howard Schellenberger.  But I think being a Louisvillian it’s ingrained in all of us.  To fight to the top of any and every mountain that people from this city sets their sights on.  Muhammad Ali used to tell the local young men he encountered, “You can do anything, you are a Louisville boy.”

At Ali’s funeral procession this summer we saw the city of Louisville acknowledge the global community’s belief of one of the many facets of the life of Muhammad Ali.  That anything…. everything is possible.  A boy from the West End of Louisville can be the greatest of all time….. and a football program on the edge of extinction in the 80s can host a Top 10 match-up on College Game Day 30 years later.

Hosting the production that is ESPN’s College Game Day is a milestone for any program.  But it’s only the beginning. It’s a nod from the influencers of opinion (and the financial backers) of College Football that your game that week matters in the shaping of the landscape of college football.  Lamar Jackson may be a once in a generation type player worthy of the Heisman and Louisville may be worthy of consideration for the College Football playoff…..but College Game Day is just the beginning.  Louisville MUST WIN on Saturday if it hopes to take the next step up the ladder of the college football consciousness.  Saturday is merely an opportunity.

The journey through these 30 years has been a wild ride for me personally.  Sitting in this seat, we’ve written a lot about the Cardinal Football program, planned travel, done podcasts, radio appearances.  But it didn’t begin here.

It began in the parking lot at the Kentucky Fair & Exposition Center. Throwing Nerf Football in the various parking lots outside what is now known as Old Cardinal Stadium.  Getting excited to stay up past my bedtime because Louisville was playing on Thursday Night. I remember the biggest human being I ever laid eyes on was Ted Washington.  I remember Brett Favre. Playing on the field at Old Cardinal Stadium with other kids after the games. Seeing Texas & Bevo lay down, the Caravan to Riverfront Stadium, the failed two-point conversion against Ohio St, Brohm’s broken leg, Anthony Cumming’s perfect post-pattern in the Fiesta Bowl, the Liberty Bowl…..and Southern Miss.  Oh Southern Miss I remember how you used to be.

I remember the stadium during Ron Cooper. The canon mis-firing during the game injuring several student volunteers. I was at every home game during 1997’s  1-10 season, and I remember those games being cold. Even the ones in September. I remember having a brief lead over Penn State & Joe Paterno and how exciting that was. I remember going to Joe’s Older Than Dirt for Ron Cooper’s last Coaches’ show and Paul Rogers reading a question off the air: “How long will it take for you to pack your s***?” And how insistent Cooper was that he would be back for the 1998 season to open Papa John’s Cardinal Stadium.

I remember the opening day thrashing of that new stadium. And hearing one of the most annoying and uneducated Kentucky fans in existence say over & over again: “Air Raid ’98” as Tim Couch lit up the brand new scoreboard. I remember my father’s heart attack that year and him having to miss Mike Watkins fill in for Chris Redman against Army to go bowling. I remember him arranging for me & a beloved (now departed) friend to go to the Motor City Bowl because he was unable to go. I remember how cold Pontiac, Michigan was 2 days until Christmas after a pep rally and BEFORE the Silverdome opened its gates leaving Cardinal fans in an apocalyptic huddle.

I remember the Liberty & GMAC Bowls. I remember the rain & Henry Miller…. and I remember the goal posts coming down.  I remember: “Are You Ready?”  I remember Jerry Punch announcing John L. Smith to Michigan State DURING the GMAC Bowl after a 12-hour bus ride, taking a beating against Byron Leftwich and Marshall, and then riding 12-hours BACK.

I remember taking a knee against Kentucky because Bobby Petrino wanted “to give them what they want.” I remember Miami & how the eyes lit up around the now demolished Miami Orange Bowl when Stefan LeFors hit Tiger Jones on a fade. And I remember Devin Hester, Frank Gore, and Kerry Rhodes’ drop. I remember going 11-1 and going to the Liberty Bowl. The jubilation of a Big East invite, Dumervil’s 6 sacks, & I remember driving through the fog of West Virginia only to arrive in the one of the most hostile environments imaginable in Morgantown. I remember the Big East apology letters.

I remember what happens when you jump on the bird.  The best individual performance I’ve ever witnessed was Michael Bush’s first half versus Kentucky in 2006.  I remember his leg. I remember Brohm’s thumb. Urrutia’s stiff arm. Will Gay’s offisides. Jeremy Ito’s point to the camera. The field rush in Piscataway. I remember Pat Carter to Anthony Allen in the Orange Bowl & celebrating while hugging my mom who the next month would find out she had breast cancer.

I remember the Atlanta Falcons luring away Bobby Petrino and upon meeting Steve Kragthorpe how upset I was that we took a step back. And those 3 years I have tried to NOT remember. But somehow I just can’t forget or forgive Larry Taylor’s ‘fair catch’ or Mike Teel’s deep ball. I remember carving “Fire Krag” backwards into a pumpkin and projecting it against any surface I could find.

I remember the rain at Florida International & Southern Miss on consecutive weeks. I remember Ryan Nassib’s bombs over Hakeem Smith. The ACC invite. And Teddy Bridgewater’s broken wrist & twisted ankle rallying the Cards over Rutgers……the shuffle pass to Jeremy Wright, the corner fade to DeVante Parker, the Shawn Watson hug and the walk back with Teddy & my father to the bus after the adrenaline wore off and the pain the Louisville Quarterback was in following the conference title.  I remember closing off Canal Street in New Orleans to send the team off to the Superdome and Bourbon Street drenched in Cardinal Red for 4 days.  I remember stunning Florida.

I remember when Bobby came back and Louisville’s Defense asking for noise in Notre Dame Stadium AND GETTING IT from its fans in the 4th Quarter.  I remember the 2nd halves vs. Florida State in 2014 & 2015.  The noise of Clemson…. James Quick getting caught from behind & Traveon Samuel’s kick return.  The 0-3 start and the comebacks vs. Kentucky.  I remember Lamar Jackson’s breakout vs. Texas A&M.

All of this and more is part of the story.  But even for those memories that we might lose along the way it’s important to regain perspective of the journey.  The highs and lows of a football program, of life, are all there to make you appreciate the struggle and when arriving at accomplishment. In the end, Louisville fans made this happen.  You made it happen because you stubbornly kept showing up. Kept fighting the good fight. Thousands of C-A-R-D-S chants. Tickets. Parking. But it’s the PASSION.

The odds were stacked against this program.  Louisville Football should NOT be in the ACC.  They should not be hosting College Game Day.  They should not have wins in the Orange, Sugar, and Fiesta Bowls. Let alone APPEARANCES!  But this city and our school has never worried about where OTHER PEOPLE think we should be. We’re great. We know it.  Give us a chance and we’ll make the most of it.

Saturday is just another step on the ‘collision course’.  For some that may be more mission statement than prophecy.  But for the town that bore Muhammad Ali, it’s just a matter of time. Saturday #2 vs. #10 will play at Papa John’s Cardinal Stadium. College Game Day comes to town.  It’s just another opportunity for the Cards to SHOCK THE WORLD and for the program to pronounce on the biggest stage of the week, “Imma Show You How Great I Am.”.