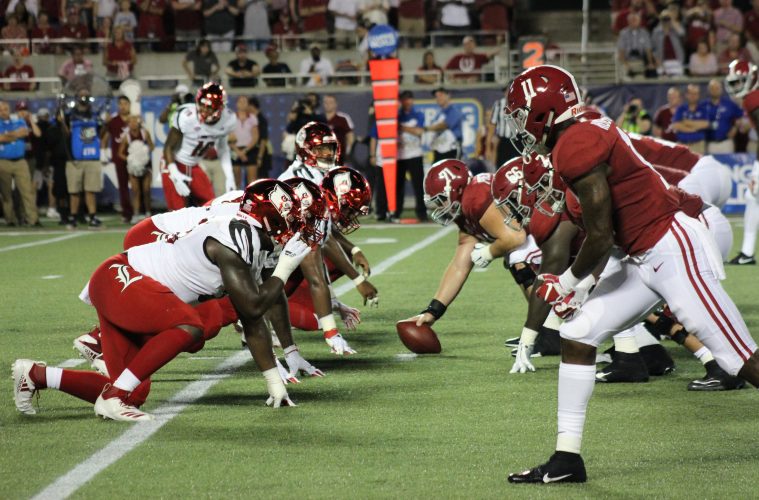 THE MODERATOR: We’re going to get started with Coach Saban. If you have questions,

them out. We’ll open the floor with a statement from Coach Saban and then we’ll take some

COACH SABAN: Well, I think that if you look at the results of today’s game, you have to

be pleased that we’re able to win. I think there’s a lot of good things that we did. But I also

think that there’s a lot of things that we need to fix.

So as a coach, you always think more about the things you need to fix than the things

that you did well. So I don’t want anybody here to think that I’m not pleased, you know, with

the effort of our players, the intensity that they played with. We executed very well on a lot of

plays. And I’m really, really proud of the way the team came out and played and executed in

But I also think that it’s pretty obvious that we had way too many penalties, a lot of

undisciplined-type penalties, and if you look at the challenges of the season ahead — and I

watched TV today. Did anybody else watch TV today? There’s a lot of good teams in our

league. I watched TVs for the last couple of days. There’s a lot of really good teams in our

And if we’re going to meet the challenges of the future, we need to do a lot of these

things a lot better and way too many mental errors, really on both sides of the ball, but more

on defense. And you know, undisciplined-type penalties, basically gave the team a

touchdown, just gave them a touchdown, stopped them on third down twice and had

penalties two times in a row. I mean, you do that against a good team in a close game, you

season and the teams that we’ve got to play in the future and what we need to do to improve.

So we always have 24 hours to enjoy the game, and I certainly want the players to do that. I

mean, they can wear their sweats home tonight and they can be happy for 24 hours but we’ve

things we need to improve.

the board because we hit somebody in the back — and we hit them in the back. And it was a

to run for a touchdown. So if I sound a little bit pissed, you’re right. I am. All right? So you

THE MODERATOR: All right. We’ll take some questions. Raise your hand, please. We’ll

COACH SABAN: I talked to the quarterbacks Thursday before practice. And they both

knew exactly what the situation would be in the game. It’s how we practiced on Thursday.

And you know, I wanted Tua to play somewhere in the neighborhood of 20 plays and then

And then wanted Jalen to have an opportunity to play. He did some good things and

to get the experience to go on two-minute, you know, right before the half, so we put him

back in there because he hadn’t had much experience doing that. And, you know, Jalen got to

play some in the second half and made a couple good throws, but, you know, we got to be

able to execute and do what you’re coached to do. That’s the No. 1 thing.

And, you know, we’re going to continue to have both these guys be weapons for us on

offense because I think they can. And I hope both guys can do a good job of preparing and

managing to get ready for the game so that they can contribute to our team in a positive way.

good throws, very accurate throws, put the ball right on guys. When they had halfway decent

coverage, he made good decisions for the most part.

ball in the pocket, and he’s going to get the ball knocked out of his hand. You know, those are

the kind of things that I’m talking about that doesn’t get you till it gets you. So you’ve got to fix

them before it gets you.

But he played well. I think he executed. He did what he was supposed to do. He read

the right thing. He was well prepared in the game. I think the offensive coaches did a really

good job of preparing for what they were going to see, we pretty much saw what we thought

we were going to see, and for the most part did a pretty good job of executing against it.

got injured in the game?

COACH SABAN: We don’t have any significant injuries. You know, Mack Wilson could

have went back and played in the game. We just chose not to put him in. I think the score was

40-7 or something. We were getting ready to play some other players so that’s, you know, a

good thing that we’re able to do today.

We got a lot of really young players that are in backup positions, so for them to go out

and play today was a good thing. They made some mistakes, too, which, you know, led to the

last score. So — but they’ll learn from it and get better.

How do you think Tua handled those decisions when he was under a lot of pressure?

COACH SABAN: I think he did a pretty good job. I mean, Tua does a really good job of

keeping his eyes down the field when he’s scrambling in the pocket. I mean, the first

eyes down field and throw the ball, you know, to a guy like that, and he’s capable of making

those kinds of plays. Some guys when they start to scramble, their eyes go down. They can’t

see down the field anymore so they’re stuck running.

So anyway, I thought he handled the pressure well. I thought we had a good plan to

handle it. I think he recognized it for the most part. And I’m sure when we watch the film,

we’ll see some things that we could have done better.

Q. What did you think about the secondary and how they performed against a

quarterback who was able to throw the ball down the field pretty well?

COACH SABAN: You know, we didn’t give up a lot of big plays and the mental errors

were made mostly on pressure. And, you know, I thought we made some mental errors in the

secondary. When you see a guy running wide open and nobody’s around him, that means

somebody messed up. Because we don’t have any defenses where a guy doesn’t get covered.

We don’t have any. Everybody’s got somebody. So when you see that happen, and it

So, you know, what we were able to do in the second half and some of these errors

were — we’re trying to get somebody else who can play star. And we have been really trying

to work Diggs there. We worked Patrick Surtain there for a long time. It’s really probably too

much for a freshman to try to play two positions, so we got to play Trevon there in the second

half. It’s his first time he ever played. A couple times they went on motion and he was a little

uncertain about what to do.

But I think we’re going to learn a lot about that. You know, I thought Deionte

man-to-man for the most part.

You know, they’re receivers. They talked about how they were supposed to be pretty

good so I was really sort of pleased with the way we covered. I wasn’t always pleased with

some of the mental errors that we made.

COACH SABAN: I think I saw the same thing you saw. Did pretty good. We’ve known

he’s always been an explosive kickoff returner. You know, I thought he did a great job on

returns, the one that got called back, but we had some other positive returns as well.

I think Jaylen Waddle did a nice job of that for a freshman to be back there on punts,

kickoff return. It’s always great to take one back.

many new guys on the staff?

COACH SABAN: Most of the time pretty well. You know, there was some — couple

things I thought we did that, in the heat of the moment, maybe weren’t the kind of choices

and decisions that we should have made. But I think it was good learning experience for us as

a staff, working together. But for the most part, it went pretty well.