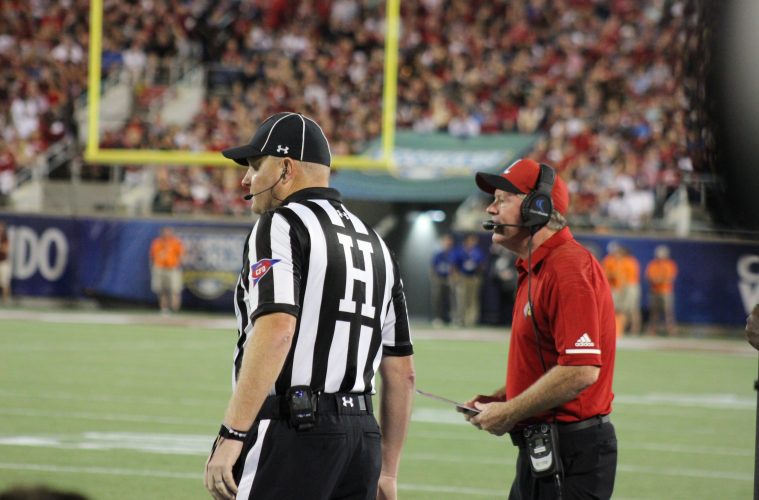 THE MODERATOR: We’re going to get going with Coach Petrino. We’ll open the floor to

Coach with an opening statement.

COACH PETRINO: We got beat by a better football team. There’s no question about

that. They’re very good. They did a great job. Their offense, their defense. They beat us in

special teams. They outcoached us. So, basically, we got beat in all phases of the game.

The biggest thing that we have to do from this is learn. You know, learn from it. And

come back next week and do better in practice, understand where we didn’t execute. And I

or they stopped us. It’s a combination of all three.

And then our defense was out on the field too long, you know. They did a good job of

running the ball and throwing it. So it was a very difficult game for us.

the ability to help us this season. But it was a tough game. There’s no doubt that they were

the better football team out there.

Q. How would you evaluate Jawon Pass’ performance?

COACH PETRINO: I mean, it was a tough night for him. You know, I thought he came

out and completed some passes. He was competing. Made some good escapes and runs. And

different blitzes that they used.

You know, they threw a lot at him. They brought guys from different sides and checked

when he checked. And, you know, they’re a very good football team, so we can’t have the

interception late. You know, the interception early, he just put too much air on the ball, and

they went and got it. It was a really good defensive play.

COACH PETRINO: They just said he had a wrist issue, and he wasn’t going to be able to

come back into the game. That’s all they really notified me of.

seemed to get to him. Do you remember maybe what that point was and how he seemed to

COACH PETRINO: Yeah. It was, I thought, the early part of the third quarter, and they

ran through our offensive line a few times. They switched things and brought pressure a

couple times that got us that, you know, he had a lot to focus on downfield what they were

doing, plus what they were doing on the front.

But that’s why I kept him in. I wanted him to stay in and have to work through it and

keep playing, you know. There was never a question of taking him out of the game. He

needed to stay in there and get all those reps. He kept competing. He’s a guy that’s going to

have a great career here, you know. But this was a hard opener for him. There’s no question

COACH PETRINO: Yeah. We didn’t get to remove the line of scrimmage much, you

know, and then we got behind the sticks and had to throw the ball, and then get some

negative yards on sacks. But, you know, we weren’t able to move the line of scrimmage.

And it’s kind of a different tale between what they did and what we did. You know,

they were able to move the line of scrimmage. Running back had four yards and then, you

know, contact on other yards, and we weren’t able to get that done.

confusion for you guys?

COACH PETRINO: Yeah. We had an issue on the offense where we were calling out a

true freshmen — so that was one of the issues.

And then we had a couple on the field goal that, you know, we can’t have that. That

was something — I think that when Jonathan went down, you know, we got a little bit off on

to lose early in the game because, you know, he’s been the leader of our defense.

opener a lot of teams play?

COACH PETRINO: Yeah, it has to. It has to help us. We’re out there competing against

some of the best players in the country and great coaching. We’ve got — like I told the players,

better, know how to, you know, concentrate and focus during the game, tackle better — you

know, we missed some tackles, particularly in special teams that you can’t miss.

THE MODERATOR: Thank you, Coach.