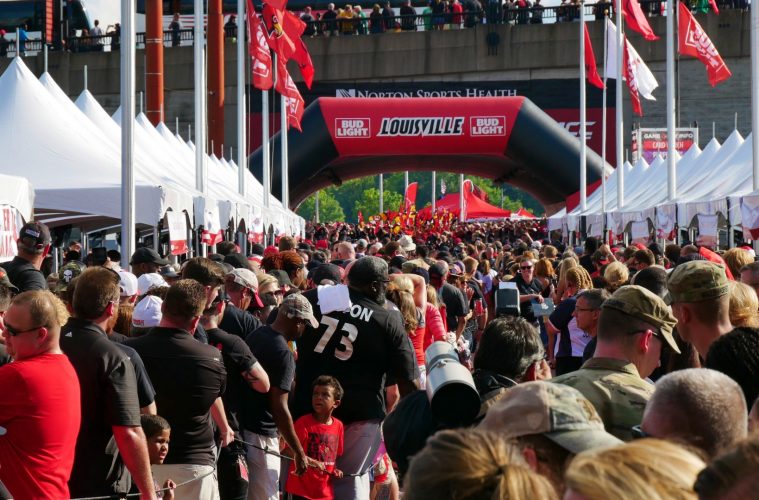 The first University of Louisville football game under the Scott Satterfield regime came to Cardinal Stadium on Labor Day, almost exactly nine months after the new head coach was announced by athletic director Vince Tyra. Fitting, that the rebirth of Cardinal football comes at the apex of a standard gestational period against a team named for the blessed Virgin Mary.

Indeed, the assembled faithful of Card Nation were more than ready to accept salvation from 2018’s 2-10 season. Spirits were high as a Cardinal Stadium record 58,187 fans trickled in despite some last minute issues and bottlenecks at the gates. But a 75 yard, seven play opening drive from Notre Dame quickly had Cardinals fans tumbling back towards despair. The first play from scrimmage found C.J. Avery in a quandary, unsure of whether to commit to the sack or fall back into coverage. His indecision allowed Notre Dame’s senior QB Ian Brook to bust out a 37 yard run to build the momentum that led to the Irish’s first seven points, and all seemed joyless once again in Mudville.

While the Cardinals counter-drive started as anything but impressive, it would finish with an answering touchdown to the Irish that had Floyd and Central rocking. Hassan Hall’s slightly indecisive kickoff return was followed by the debut of the run-centric Satterfield plan as Jawon Pass and Javian Hawkins led a 12 play, 88 yard scoring drive. It quickly became apparent that the cultural changes so vaunted in the off-season would quickly pay dividends on the field.

And so now imagine the delight as the defensive squad retook the field after the disappointment of the first drive, only to force a three-and-out while treating Cardinals fans to their first taste of new third down music in years.

Who Run It (Instrumental) – Three 6 Mafia

The defense is without a doubt the avatar of the Cardinals’ transformation. After a punch to the gut from Notre Dame’s first drive the defensive unit would return again and again with effort, hustle, and critical saves. Russ Yeast, and Nick Okeke would lead the Cardinals with seven tackles apiece while Khane Pass and C.J. Avery followed just behind with six apiece. 18 of the Cards’ 61 tackles were assisted, as the entire defense ran to the ball as Coach Bryan Brown has so often emphasized.

For the majority of the first half it seemed as if the offense would meet or exceed the example set by their defensive brethren. While both the Irish and the Cards flirted with, and occasionally succeeded, in going to the air it was the run game that found the most success for both teams. Javian Hawkins would ultimately finish with 128 yards rushing as the first classified freshman since 2009 to top the century mark in his debut against an FBS opponent. Jawon Pass would miss a hundred by just a yard, with Hassan Hall joining in not far behind as a contributor to the Cardinals 249 net rushing yards.

More crucially, the Cardinals evaded all penalties in the first quarter, with their first penalty coming in Q2 on a hold during a punt return. That penalty was followed by a chop block penalty that stymied a UofL drive, and suddenly the cracks started to show. Late in Q2 Jawon Pass would fumble the ball deep in his own territory, only to have Dorian Etheridge recover a Notre Dame fumble on the very next play. Incredibly, Jawon Pass would once again fumble on the very next play. Kelly Dickey is still trying to figure out when the last time three fumbles on three straight plays occurred.

Notre Dame would capitalize on the Cardinals mistakes to strike with another touchdown before the half and take a 21-14 lead into the locker room at the half. While both teams would adjust, the wear and tear on the Cardinals showed through in the second half. Khane Pass would go to the sideline with an injury and the Irish would quickly strike against the perceived weakness as the UofL secondary struggled to adjust. Two more Notre Dame touchdowns would follow while the Cardinals could only answer with a field goal through the remainder of play.

While the (eventual) five fumbles stick out like a sore thumb, it’s hard to take anything but a positive assessment from this game. The offensive line created opportunities just as you would expect the Band of Brothers to do. Defensive effort and hustle kept the Cardinals in the game until late, even as the offense began to sputter. The crowd was electrifying, and it was obvious that the players felt the energy. Even in the face of a gut-punching opening Notre Dame drive, the Cardinals didn’t show any of the quit that plagued last season.

Scott Satterfield wasn’t expected to hatch a renewal of Louisville football until at least next year. Congratulations, Cards fans. You’ve got a surprisingly early bundle of joy.