Initial reaction: “WHAT THE HELL, SOME THANK YOU TO TOM, HUH?  AHHHHHHHH!!!!”

Then, you take a deep breath, realize you have about 1% of the story, step back, and re-evaluate.

Coach Hurtt is heading to the Chicago Bears to follow his dreams of coaching in the NFL.  I am happy for him.

He left a nice note on Facebook thanking the city of Louisville. Again, Bravo. He truly enjoyed his time here.  Maybe one day he will be a star power head coach and will consider coaching the Cardinals. It was a classy touch, and it makes me miss him even more. 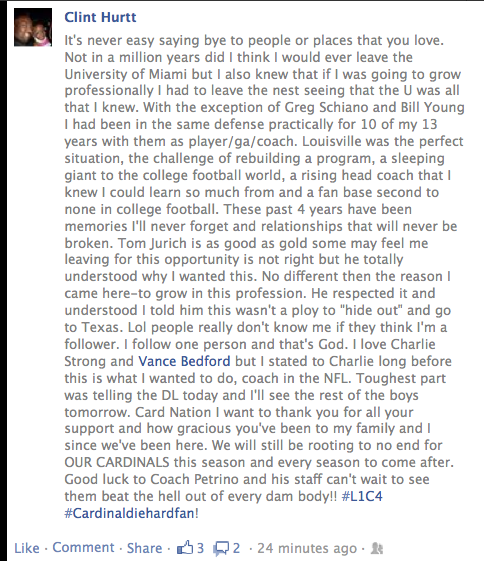 1.  The players:  High impact. They just got over Strong leaving, and now this.  They are kids, loyal to their coaches, so this was a double bomb.  Coach Hurtt met with them, and that went a long way as the messages on twitter were gushing with gratitude. The leaders (players) of this team will rally the guys, and they’ll be fine.  Jermaine Brooks I worry about the most.  One of his best friends (Chane Behanan), his head coach (Strong), and his position coach (Hurtt) are all gone.  Tough month for the big fella.  He will rally, but as fans we always overlook the impact to the kids.

2.  Long Term Recruiting: Medium Impact. You could argue this is “high impact”, but he can’t recruit now due to the “show cause” penalty, and he is a future hot commodity. Someone was going to offer him a coaching upgrade on another team soon had it not been  the NFL. By the time the “show cause” had ended, he would have outgrown his D-Line coach position. So “if he wanted to remain a D-Line coach forever at UofL”, yes high impact. Not likely. The man works hard and is respected, he was going to move up the ladder.  If his dream was “to stay at Louisville” – raise it to High Impact, we now know that wasn’t the case.

3.  Short term recruiting: Low Impact.  He can’t recruit due to ‘show cause”. We were already losing D-Lineman commits, they commit more to the head coach.  When they work with Hurtt – they fall in love with him (see #1). In the short term I see marginal impact.

4.  Position Coaching:  Low Impact.  Coach Granthum has been coaching the D-Line his whole life.  Here is his background.

I think Coach Hurtt is grateful Tom stood by him.  I think he is grateful to fans and city.

I also think that we as fans really like coach Hurtt, so we hate saying goodbye.  Although we only really know Coach Hurtt from  very few interviews, and even less social media – it was clear the players were crazy about him and that is usually enough for us.

He is just chasing his dream, and I am for everyone doing that.  Life is short.

Chase that dream Coach Hurtt, and thank you for all the work you did for the Red and Black.