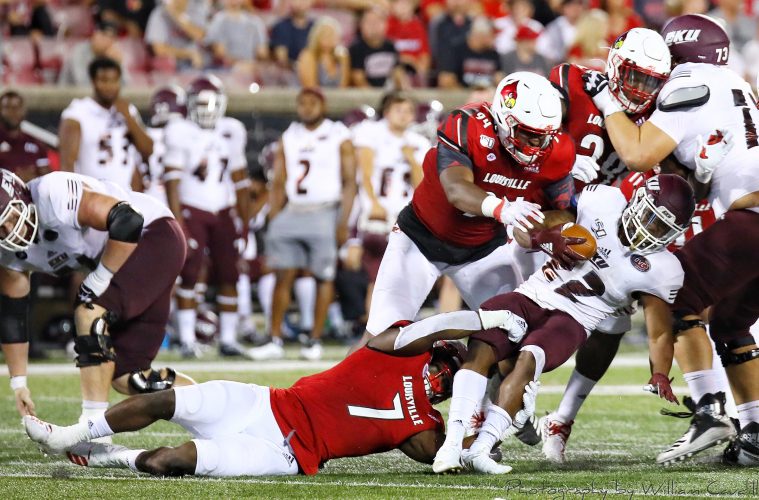 FCS Opponents: A Bad Idea for the FBS Regular Season

It is well-known that Tom Jurich and the University of Louisville Football program have attempted to schedule a marquee game for 2013, but Jurich & the Cards have struggled finding games for a LONG time now.  VP of Athletics, Jurich, calls each and every Big Ten & SEC team every year trying to schedule a series.  In fact, a recent New York Times article highlighted Jurich’s mentality in a piece titled: “At Louisville, Athletic Boom is Rooted in ESPN Partnership”.  Anyone, Anytime, Anywhere.  That’s been the motto for Tom Jurich while overseeing the football program since his arrival.

Scheduling Around the Myth

A lot of programs don’t have the confidence to open the season on the road or in a neutral site against solid programs.  This week College Football saw some outstanding football:  Georgia traveled to Clemson while Alabama vs. Virginia Tech, TCU vs. LSU, & Mississippi State vs. Oklahoma State were neutral site games.

Other programs, most other BCS conference schools play lesser opponents.  We call that “Scheduling Around the Myth”.  When a school like Louisville can not find a decent game on its schedule while Oregon opens up with Nicholls State, that’s a problem. Florida hasn’t played an out of conference game away from the state of Florida since a loss in the Carrier Dome to Syracuse in 1991.  That’s sad.

In all, Football Bowl Subdivision (FBS) programs lined up against FCS opponents 29 times during College Football’s opening weekend, here is the list:

Scheduling Around the Myth has been in common practice for a long time.  Getting to 6-6 and a bowl game is MUCH easier for programs with an FCS program on the schedule, than it would be if FBS programs would just decide to play each other instead of shelling out the 6-figure paycheck to these schools.  Much of it is donor driven.  Athletic Directors & University Presidents want to be able to claim the football program had success and point to a bowl appearance.  That works in the middle just fine….but at the top when there are sometimes as many as 5 teams with a claim to be in the Top 2 at the season’s end to play for the National Championship that extra legitimate game could have been VERY helpful.

Must Have 7 Home Games

One of the reasons why the FBS game happens is because programs RELY on the 7th home game every season to fund their entire athletic programs.  An extra home game for a school, like Louisville, with 55,000 seats can sell each ticket at an average of $50/ticket and earn an extra $2.75M on ticket sales alone.  That doesn’t include parking, concessions, signage, or any other stream of revenue.

Why Is It Good/Bad?

Playing the FCS game is good for the FCS school.  Big-time programs often pay out 6-figures or more for FCS programs to travel  paychecks to travel into FBS programs.  The big checks help fund a HUGE part of the FCS budget and other sports programs.  Also, a lot of the early season games get picked up on national or regional television and provide exposure for the school that they wouldn’t ordinarily receive.

Outside of the easy payday for both schools, the game is bad for the FBS program.  FCS teams come to town with nothing to lose, a guaranteed payout, and a chance to beat a big-time program. If the FBS school doesn’t win by a HUGE score the fans are angry, if they lose……it’s worse.

Last week, in the 29 games that featured FBS vs. FCS schools there were 8 FCS “upsets” over FBS schools:

Do you think these 8 programs were happy to wait an entire off-season of optimism to lose to a school, that probably didn’t have a single athlete recruited by their program?

Personally, I think the FCS game needs to exit the regular season.  But I do think there is still a way to get the payday for both schools, and do it in a way that is more interesting than it is currently.  PLAY THE GAME IN THE SPRING. Everyone likes a little Spring Football, but lining up Offense vs. Defense just doesn’t get the blood boiling quite the same way as it does when your team takes the field against a real opponent.

Play the FCS game in the Spring. Sell tickets, concessions, put it on Television.  Both programs get the the cash benefit, the fans get the benefit of getting to cheer on their school, and the programs can line up against another team that isn’t as familiar as its own. Losses don’t hurt FBS programs, and those programs can try and develop REAL game depth outside of practice before the season starts with some of the younger players.

Currently an NCAA rule does not allow this.  But I think a rule change would be fantastic.  If nothing else FBS schools would have to play ALL 12 of their games against FBS schools.  Moving into a 4-team playoff in 2014 is a step, having that 12th legitimate game would be another in terms of clearing the way to finding a true champion and increasing the revenue of college football.