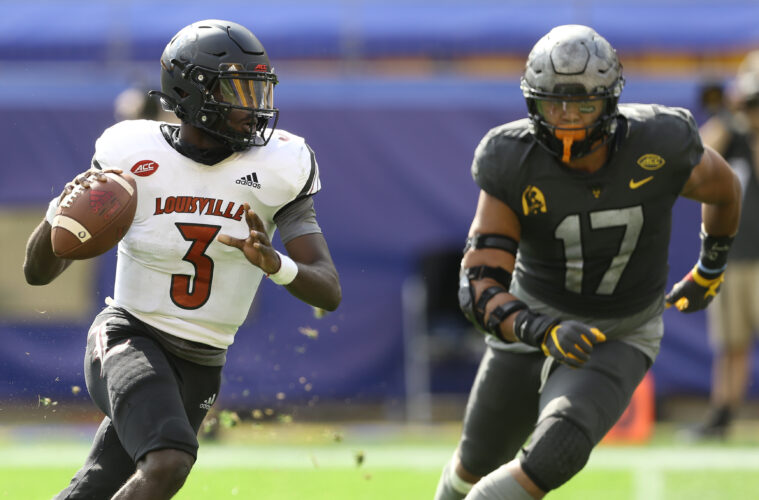 Of course anytime we talk about the Passing Game we’ll start with the quarterback. Malik Cunningham has appeared in 33 games as a Louisville Cardinal at the Quarterback position. He’s started 25 games at Louisville and has passed for 5153 yards with a 63.1% completion rate on 43 Touchdowns and 18 interceptions.

Malik’s 43 Touchdowns is 7th all-time at Louisville and he is just one short of tying Jay Gruden for 6th in school history. He’s also responsible for 61 Total TDs in school history (but this is a passing game evaluation).

Cunningham dots the Louisville record book. In fact, Malik Cunningham’s 2019 season is the #1 Passing Efficiency Season in Louisville Football History…… and he is currently UofL’s #1 Passing Efficiency Quarterback during a career ahead of Stefan LeFors. Malik is 10th in career yardage, 296 yards behind Jeff Brohm. With just a 2000 yard season in 2020, Malik will pass Jeff Brohm, Ed Rubbert, Stefan LeFors and Jay Gruden and will move into #6 all-time passing yardage by a Louisville Quarterback.

Of course there is no denying that Malik’s 2019 season was much better than 202. Even though Cunningham’s completion percentage rose from 62.6% to 64.1% it was the interceptions and turnovers that doomed the Cards. Malik threw 22 TDs and just 5 INTs in 2019, a year later and Cunningham had 20 TDs and 12 INTs.

Those numbers are especially concerning when you consider that Malik had those 22 TDs on just 179 attempts and then in 2020 threw just 20 TDs on 304 attempts! (an increase of 69.3% in number of attempts)

Cunningham is one of those quarterbacks that can make a ton of plays and in the passing game has a quick release and a nice deep ball. Scott Satterfield has talked a lot about decision-making and taking what the defense gives Malik and hitting the checkdown more often. Malik is one of those players that never quits. He’s fearless and in the 4th quarter a lot of those plays are necessary. But in 2020 some of those plays cost the Cards possession. Everyone is looking for the more polished Malik Cunningham to come out and play with an edge. It’s a delicate balance to strike, but if Malik can do it, the Cards can be an excellent football team.

Behind Cunningham is Evan Conley. Louisville knows what it has in Evan Conley as a capable back-up. Evan was much more relied on in 2019 when he was instrumental in wins against both Boston College and Wake Forest in back-to-back weeks. However in 2020, Evan didn’t get nearly as much time with Malik Cunningham remaining relatively healthy. Evan enters his 3rd year with the Cards and can come in and run the offense.

New to the team in 2021 is QB Brock Domann. Domann is from Colorado Springs, CO and played the 2018 season at Ventura College, redshirted in 2019 and was a JUCO All-American at Independence CC (featured in Last Chance U). Domann threw for 1540 yards in 7 games (220 ypg) for 10 TDs and 5 INTs. Brock’s dad (Craig) is an agent for NFL players and his mom (Teddi) is the CMO for the same agency (360 Sports Rep). Their agency has represented tons of NFLers over the years including from Louisville: Jamie Asher, Gregg Scruggs and Brandon Dunn.

The big elephant in the room for 2021 is how are the Cards going to replace Tutu Atwell and Dez Fitzpatrick?

We can go deeper into these stats for Dez & Tutu, but you get the idea. Replacing these guys is going to be TOUGH. And it’s more different than replacing ONE of your best wide receivers in school history. Louisville has to replace TWO.

Believe it or not but Braden Smith actually had a better yards per catch average than Tutu Atwell in 2020. Braden is Louisville’s most productive returning player from 2020 and hauled in 27 catches for 370 yards. The big thing for Braden (now wearing #4) is he came to UofL from Northwest Community College in Mississippi during COVID and did not have the normal acclimation to the team as players typically get. Still, Braden was named ACC Receiver of the Week in Week 1 vs. WKU. Braden’s role is about to increase dramatically from last season.

Justin Marshall is a BIG target for Malik Cunningham at 6’3, 213. Justin has played a lot of college football despite being behind Dez Fitzpatrick. It’s time for Marshall to step into that starting role and be a big physical player in the passing game for UofL. Marshall has made a few really tough catches over the years and has shown that he can take contact deep down the field.

Jordan Watkins is a local target who flashed late last season. And Josh Johnson has drawn praise in nearly every camp he’s been a part of since 2017 at UofL. Johnson has just been injured a ton. I personally think Watkins and Johnson both are capable to have very productive moments for the Cards in 2021… the big question is whether or not either one of these guys can turn those MOMENTS into an ENTIRE SEASON. That’s the biggest question mark with these two. Remaining healthy and being consistent.

Tyler Harrell is coming into his 4th season at UofL. Everyone has talked about how fast Tyler is, but he’s had just 2 catches in his Louisville career. But this camp, Scott Satterfield has repeatedly brought up Harrell’s ability to take the top off the defense and take advantage of that elite level speed.. can he? I’d love to see that happen for the Cards and for Tyler.

Some guys to watch at Wide Receiver:

Shai Werts we mentioned in the quarterback section comes to UofL after 4 years starting for Georgia Southern at Quarterback. Werts is a no doubt weapon with the ball in his hands, but Cunningham has to get the ball to him in his 1st season playing wide receiver in college. I’d look for Werts to get the ball in specialty situations at least, but this is a group looking for someone to stand out.

Ahmari Huggins-Bruce & Demetrius Cannon: Both are freshman from the 2021 signing class. Huggins-Bruce is going to have a productive career, there is no doubt about that… and he’s going to have really impactful moments in 2021. But when does it all come together for Satterfield & Gunter Brewer to give Huggins-Bruce that expanded role? That’s really up to how quickly he acclimates to college football… he’s a player. Demeterius Cannon is HUGE and imposing. Personally I can’t wait to see it all come together for him and I think we’ll see him in some situations throughout the season.

Jaelin Carter from Manual High School played 3 seasons at Eastern Kentucky and has been under the radar….. but that’s not going to last long. He’s gotten some mentions this camp and his physicality is drawing praise from his teammates as well.

The Cards also have Reece Jesse from Hopkinsville, Elijah Downing from Ballard, Bradley West from Trinity, and Christian Henry from Concord, N.C.

We aren’t starting this conversation with anyone other than Marshon Ford. Marshon is currently 4th in Louisville History in TDs by a Tight End…. and he’s got years left to play college football. He’s productive and the former walk-on from Ballard has drawn praise from head coach Scott Satterfield who says that Ford won’t leave the field unless he’s tired. Satt also has discussed using Ford in different ways than they have traditionally used the tight end to give defenses different looks.

The tight end is a huge part of what Scott Satterfield has done throughout his coaching career both in the passing and the run games. The Cards have lots of different body types at the tight end position from Isaac Martin at 6-1, 250, to Francis Sherman at 6-3, 237 or Vic Mullen at 6-7, 250. And we’ve seen Isaac Martin play a ton of football and Francis Sherman came on to the scene late last year. I’d keep an eye out for Duane Martin (freak) and Dez Melton and Christian Pedersen…. listen Satterfield is going to play a lot of guys at tight end.

Malik Cunningham can also use his Tight Ends/H-Backs to help checkdown in the passing game. Traditionally QBs will use Running Backs for this, but because the tight end is such an important part of what Louisville does, this is a viable option for Cunningham when he needs to move on to the next play.

One thing Louisville hasn’t done much at all since Scott Satterfield arrived is throwing to the Running Back. Particularly in the checkdown. You might be able to think of a few wide open wheel routes (Hassan Hall has caught some, dropped some) from running backs in the last two seasons, but Javian Hawkins & Hassan Hall combined for just 9 catches in 2019… and in 2020 Louisville running backs had just 26 receptions, which is a big improvement.

We’ve seen what Hassan Hall can do with the ball in his hands with space to move around. Louisville also just earned the transfer of Syracuse RB Jawhar Jordan. It remains to be seen what Trevion Cooley, Jalen Mitchell, Maurice Burkley, Aidan Robbins and Greg Derosiers can add to the passing game from the running back spot. Protection is also a key element that Malik Cunningham has to rely on in critical situations. Keeping an eye out on who the preferred pass catchers are and who is counted on to protect when asked is one of the early storylines we’ll be watching in 2021.

Louisville’s 1998 season remains the highest output in Cardinal Football history passing the ball with 374.83 yards per game with Chris Redman at Quarterback and John L. Smith coaching UofL. Louisville in 2013, 2007, 1999 are the only other 300+ yard per game seasons.