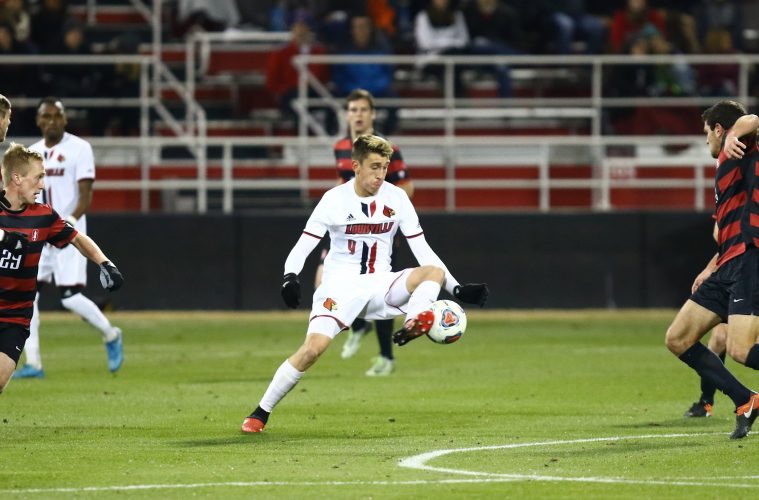 LOUISVILLE, Ky. – Mohamed Thiaw scored a pair of goals and Will Meyer made a pivotal save on a late penalty kick as the Louisville men’s soccer team earned a 3-2 victory over Wisconsin in Saturday night’s spring exhibition match at Dr. Mark and Cindy Lynn Stadium.

“We were excited to play a college team, and not just any college team, a very good college team. Wisconsin had a great record last year and nearly missed getting into the tournament,” said Louisville head coach Ken Lolla, whose team had earned draws against Indy Eleven and the Chicago Fire in its first two spring matches. “For 70 minutes, I thought we were really good. We controlled the tempo of the game and we had some really good chances. With the dynamic guys we have — Cherif, Mo, Tate and even Sawyer and Adrian — we created plenty of chances. It’s great for us to score some goals, and as we got up 3-1, and the game went on, we could have had a few more.”

The Badgers opened the scoring in Saturday’s match with a goal in the 10th minute. The Cardinals answered in the 18th minute when Thiaw worked past his defender and successfully slipped a shot past the goalkeeper and inside the near post to even the score at 1-1.

The score remained even into halftime before Louisville gained control for good in the 50th minute when Cherif Dieye received a well-timed ball from Tate Schmitt and scored inside the back post for the 2-1 lead. The Cardinals pushed the advantage to 3-1 in the 64th minute when Danny Reynolds curled in a cross to Thiaw, who headed it to the back post for his second goal of the night.

Wisconsin cut the margin to 3-2 in the 78th minute when Tom Barlow received the ball behind Louisville’s back four and found the back of the net. Moments later, the Badgers had a chance to even the score with a penalty kick in the 79th minute after the Cardinals were called for a handball, but Meyer made the stop to keep Louisville in front.

“Will did a great job. He’s been awesome all spring long,” Lolla said of Meyer. “He’s been very good in the air and that save on the penalty didn’t surprise me.”

Up next, the Cardinals will conclude their home schedule against Xavier on Friday at 7 p.m., ET. Louisville will close the spring at Lindsey Wilson College on Friday, April 14 at 7 p.m.