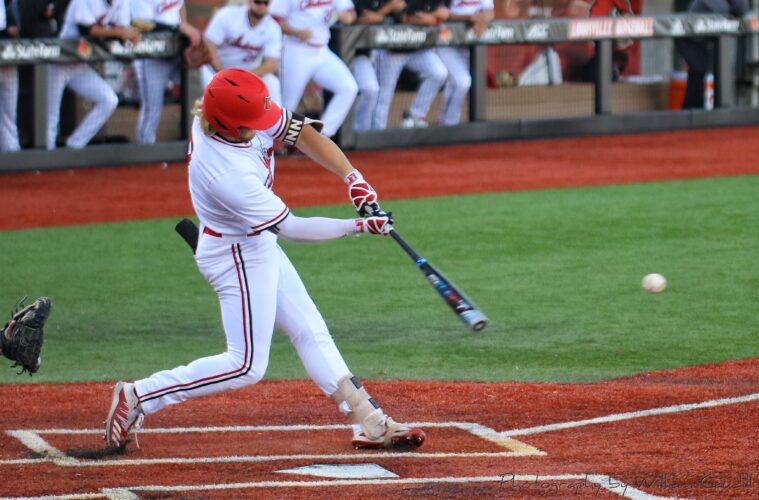 The Cardinal Nine have officially wrapped up their 15th annual Pizza Bowl. It was a series of heavy hitters and tough pitchers as we watched Snider’s Dodgers clinch the series on Friday night after Chris Seng walked it off.
The pitching staff showed us what they were made of on night one when Michael Kirian allowed just one hit and had 8 strikeouts during his five shutout innings. Michael Prosecky was busy as well, allowing just one run over 3.2 innings. Vrable’s Braves got the win in game one after Cameron Masterman, who was 3-for-4, hit a go-ahead three-run home run during the eighth inning.

Night two showed us that there was no slowing down the guys on the mound. Glenn Albanese allowed just two baserunners over five scoreless innings with six strikeouts. The game was scoreless going into the sixth inning but Levi Usher drove home Jack Payton giving the Dodgers a one run lead. A name you’ll hear a lot in the upcoming season wasn’t going to let that run go unanswered. Dalton Rushing stepped to the plate for the Brave’s and hit a two-run homer inside the right field foul pole during the seventh inning. Determined to win this one, the Dodger’s went on to score four more runs making the final 5-2 and evening the series.

The bats came alive on night three with Snider’s Dodgers seeing an 11-2 victory. With 11 runs on 11 hits, the Dodgers were hot at the plate. Ben Bianco showed us he’s going to continue to be a problem after he lead the team with a pair of two-run home runs. He was 2-for-3 that night driving in four and scoring three times. The Braves got their two runs of the night during the sixth inning after a two-run hit from Dalton Rushing.

The Dodgers were able to clinch the series in game four in walk-off fashion thanks to Chris Seng. He noted two hits that night, which included a two-run double in the fourth inning. Lucas Dunn saw his first home run of the series and Jared Poland also had a pair of hits.

Glenn Albanese was back on the mound in game five and was able to strike out 11 during his 4.2 scoreless innings. The Braves, who were down 1-0 in the fifth inning, tied the game off of a Jared Poland home-run. Cameron Masterman was back in the seventh inning and blasted a three-run homer to give the Braves their win on night five.

This annual intrasquad series always shows us one thing… the Cardinal Nine are ready to start their journey to Omaha. After an abrubt ending to the 2020 season, and learning to cope with the fact that the best pitching rotation to ever come through Louisville wouldn’t get the opportunity to make a CWS run, one thing is for sure…. Dan McDonnell and company are back and they’re ready to fight their way to Omaha in 2021.