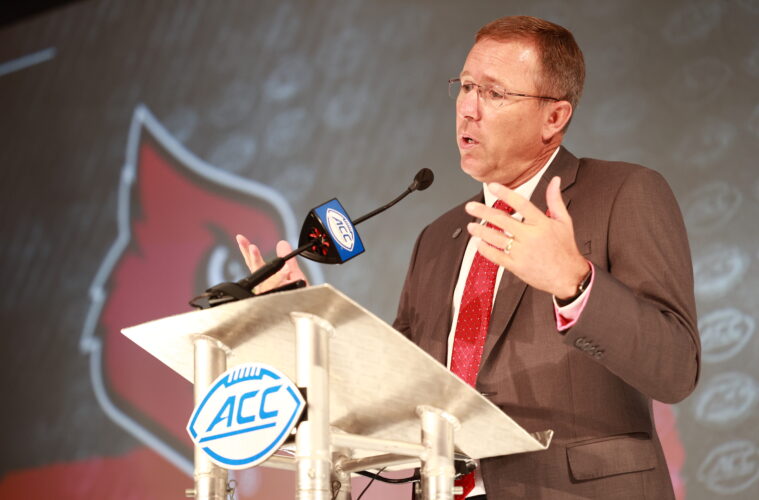 Nic Cardwell, a former quality control assistant at Louisville,  returns to the program as the tight ends coach for head coach Scott Satterfield.

Satterfield also announced that Lance Taylor will serve as the offensive coordinator and take over the wide receivers.

“I’m thrilled to have Nic Cardwell return to our program,” Satterfield said. “He brings great experience and enthusiasm to our football program. He coaches with great passion for the game and will be a great addition to the tight end room.”

Cardwell joins the Louisville staff after two seasons coaching the offensive line at Appalachian State and will begin his sixth season coaching the tight end position at the collegiate level.

In 2021, under his tutelage, App State’s offensive line was one of 13 semifinalists for the Joe Moore Award, with Baer Hunter and Cooper Hodges both being named All-Sun Belt first-team selections and Anderson Hardy also receiving All-Sun Belt recognition. The Mountaineers allowed an average of 1.21 sacks per game, which ranked 12th in the country and yielded just 4.2 tackles for loss per contest.

Cardwell helped the Mountaineers rank No. 7 nationally with 264.9 rushing yards per game during a 9-3 season in 2020 and in the top 15 in fewest sacks allowed during a 2021 season in which Chase Brice set the single-season program record for passing yards and the Mountaineers extended their FBS-leading streak of consecutive seasons with a 1,000-yard back to 10.

App State also finished with the Sun Belt’s rushing champion for the sixth straight year, with Noel and Camerun Peoples ranking No. 2 and No. 3 in the league in rushing yards per game for an offense that averaged 34.5 points.

Cardwell played for the Mountaineers from 2004-07 and worked seven years in various roles with App State’s football program, including the 2018 season as the tight ends coach, before following head coach Scott Satterfield to Louisville for one season.

With a combined 174 career starts among its offensive linemen following a win in the Myrtle Beach Bowl, App State went through the 2020 season with the nation’s most experienced line. All five of the Mountaineers’ primary starters on the offensive line earned All-Sun Belt recognition from PFF College, which ranked App State’s line as high as No. 3 in the nation during the 2020 season.

The Mountaineers rushed for at least 300 yards in five games and had a whopping 500 rushing yards with no sacks allowed in the 56-28 bowl win against North Texas — the first time with 500 rushing yards since the 1975 team gained 575 yards on the ground against Lenoir-Rhyne.

In 2019, with Cardwell serving as a quality control coach at Louisville, the Cardinals completed an 8-5 season with a victory against Mississippi State in the Music City Bowl in Satterfield’s first season with the Cards. The previous year, while working on App State’s offensive staff, he helped the Mountaineers win the inaugural Sun Belt Championship Game and beat Middle Tennessee in the New Orleans Bowl to cap an 11-2 season.

During the 2018 season, when App State averaged 37.3 points per game, Cardwell’s tight ends combined for five touchdown catches and contributed to the Mountaineers rushing for 240.4 yards per game. Collin Reed earned All-Sun Belt honors, and Henry Pearson was ranked by PFF College as the nation’s fifth-best true freshman tight end.

He was promoted following a 2017 season in which he worked in an offensive quality control capacity for a 9-4 team at his alma mater and saw App State’s tight ends account for a combined seven receiving touchdowns.

Cardwell’s ties to App State run deep, as he played tight end on the three FCS national championship teams and finished his career as a co-captain.

He arrived at App State as an unheralded walk-on in 2003 and overcame a career-threatening neck injury to play in all 56 games for the Mountaineers from 2004-07. Four of his nine career receptions went for touchdowns, including FCS playoff scores against Coastal Carolina (2006 first round) and Richmond (two TDs in a 2007 semifinal).

Cardwell coached App State’s tight ends in 2008, when Ben Jorden made the All-Southern Conference first team, before returning to Boone as an assistant director of strength and conditioning in 2011 and coaching tight ends again in 2012. He worked with the Mountaineers’ tight ends as a graduate assistant from 2013-14 and coached the offensive line at North Greenville from 2015-16.

A native of Kernersville, N.C., Cardwell graduated from App State in 2008 with a bachelor’s degree in criminal justice. He and his wife, Kira, have three children: Kai, Blakely and Brewer.