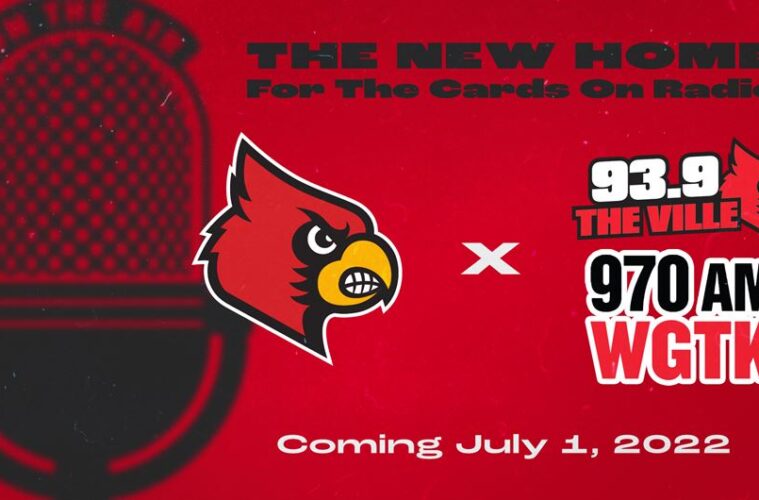 University of Louisville Athletics and its multimedia rightsholder, LEARFIELD’s Louisville Sports Properties, have announced a landmark agreement with the Louisville First Radio Group.  Notably, ESPN 93.9 FM ‘The Ville’ and WGTK 970 AM will carry all Cardinal programming and be the primary, dedicated radio home for fans and the flagship for the Louisville Cardinals Radio Network.

This marks the first time UofL’s football, men’s and women’s basketball and baseball games, as well as the seasonal football and basketball coaches’ shows, will be broadcast by the same radio partner.  All Louisville Cardinals games and coaches’ shows will have priority clearance and will be simulcast on both 93.9 FM and 970 AM.  If two Louisville programs are playing at the same time, the signals will be split to accommodate both broadcasts.  Under LEARFIELD’s prior agreement, nearly two-thirds of UofL games were subject to be moved from the flagship station due to conflict with other live sports programming.  The multi-year agreement, which begins on July 1, 2022, also calls for Cardinal Insider to air Monday through Friday on three signals throughout the year – 93.9 FM, 970 AM and 1450 AM.

Additionally, all on-air broadcast talent for UofL games remains the same. Paul Rogers, iconic voice of the Cardinals, will continue to anchor the broadcast team for the Louisville Cardinals Radio Network alongside the familiar Cards’ personalities and analysts.

“This is tremendous news for UofL fans,” said Josh Heird, University of Louisville interim athletic director. “For the first time ever, our fans will have one radio home to listen to Cards’ football, basketball and baseball programming in the Louisville market. While we appreciate the longtime relationship with iHeart, this is a brilliant move for the Cards and for our fans, where we’ll have dedicated, premier coverage as the city’s hometown team.”

The Louisville First Radio Group, a joint venture of Louisville’s ESPN Radio and Word Media Group, owns 93.9 FM ‘The Ville’ and WGTK 970 AM respectively. LEARFIELD is currently finalizing a statewide network lineup that will offer Cardinal fans greater coverage throughout the Commonwealth.  As a complement to this new, momentous relationship with the university, UofL fans can anticipate even more programming with the addition of a Louisville Cardinals Baseball coaches’ show in spring 2023.

“We are so proud to be able to call ourselves the new home of the Cards,” said Drew Deener, vice president of ESPN Louisville and morning show host.  “UofL athletics will always be our top priority on 93.9 FM The Ville. We can’t wait to hear the legendary voice of Paul Rogers on our airwaves starting this fall.”

“Louisville fans are loyal, passionate and proud, as they should be, and this new flagship agreement really is something special for them,” said Rogers. “Fans can be assured when the Cards are playing they’ll be able to listen to the live game action from start to finish. Aligning with Louisville First also allows more fans to hear our women’s basketball and baseball games with the increased coverage.”

Louisville Sports Properties is the locally based multimedia rights team that works alongside Heird and the entire UofL athletics administration on all aspects of the LEARFIELD relationship. The team facilitated the new agreement with Louisville First Radio Group on behalf of the university.

Word Media Group is one of Kentuckiana’s largest broadcast groups.  It operates 88.5 WJIE, 970 WGTK, 94.7/900 WFIA, and 1450/96.1 WXVW as part of its radio operations and WBNA TV and WBNM TV as part of its television operations.  Word operates a variety of radio formats.  WGTK is a news talk station that features one of the areas strongest signals.  WGTK is the longtime home of Trinity Athletics.  WXVW features 9 hours of Local sports talk M-F and is Home of the Colts, Indiana Pacers, Indiana Hoosiers, Western Kentucky, IHSAA sports, and The Mike Rutherford Show.

About LEARFIELD
LEARFIELD is a leading media and technology services company in intercollegiate athletics. The company unlocks the value of sports for brands and fans through an omnichannel platform with innovative content and commerce solutions. LEARFIELD services includes licensing and multimedia sponsorship management; publishing, audio, digital and social media; data analytics; ticketing, ticket sales and professional concessions expertise; branding; campus-wide business and sponsorship development; and venue technology systems. Since 2008, it has served as title sponsor for the acclaimed LEARFIELD Directors’ Cup, supporting athletic departments across all divisions.