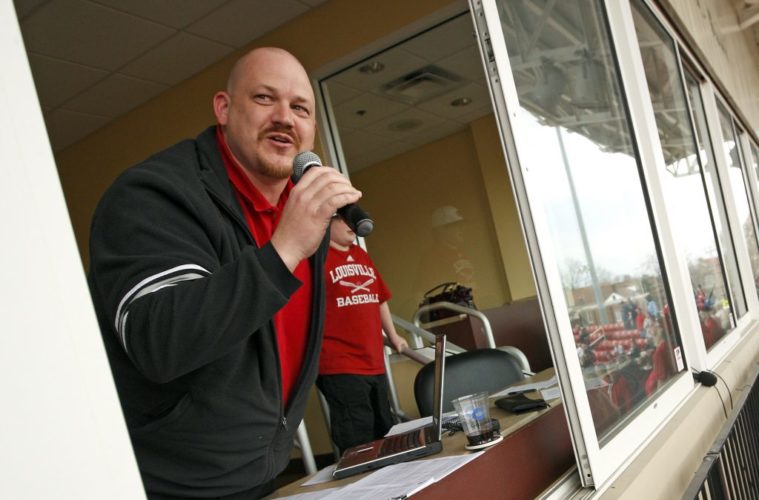 Sean Moth, who has served as a recognizable voice for University of Louisville athletic events for the past 21 years, has resigned his position with the Cardinals.

Moth has been on the microphone as the public address announcer for UofL football, volleyball and men’s and women’s basketball games since 1999, as well as an emcee for numerous banquets and special events.

Moth has also been the radio voice of the Cardinals’ baseball team for the last 20 seasons.  In his position as Senior Manager, Broadcast and Public Address, he had worked in UofL’s marketing department in writing scripts, producing commercials, recording voice-overs and overseeing media marketing agreements among his responsibilities.  He previously worked in sports information for nine years at UofL as well as with CardsTV and in creative services.

Moth created the fan chant at UofL football games when the Cardinals reach a first down, prompting the crowd with “that’s good for another …” and pausing for UofL fans to shout “Cards First Down!”  He produced many memorable announcing moments throughout his career, including his call of Corey Ray’s steal home to cap a 6-5 comeback baseball victory over Wake Forest on April 18, 2015 that was featured on ESPN: “Straight steal home!  The slide … the Cards win!  The Cards win!  Ray steals home!  The Cards win!  Wow!”

“Sean has been an amazing ambassador for Cardinal Athletics over the last 21 years while serving as the voice and face at many of our sporting and athletic department events,” said UofL Vice-President/Director of Athletics Vince Tyra.  “As a lifelong fan, there are only a few voices that comes to mind on behalf of the Cardinals and Sean’s is at the top of the list for me.  For many of us, his voice is all our kids have known.  We thank him for his hard work and dedication to Cardinal Athletics and look forward to continuing our partnership calling baseball games in the spring.”

Moth had been on furlough since late May when 43 athletics staff members were placed on furloughs and 53 other positions were eliminated.  He had intended to be back at work with the Cardinals on Friday to prepare for the upcoming fall season in a new role but opted not to return for personal reasons.  He plans to continue to provide play-by-play coverage of UofL baseball radio broadcasts.

“There are no words to describe my 21 years with the Cardinals,” said Moth.  “I am forever indebted to Tom Jurich for giving me the initial opportunity to be a part of this family back in 1999.  My interactions and relationships with my co-workers, coaches, administration, the athletes and the fans have made this an unforgettable journey and for that I am eternally grateful.  After nearly 30 years in this industry working long weeks, nights and weekends, it is time to see where the next step on this path takes me.”

Prior to his arrival in Louisville, Moth served as the public address announcer for both the Denver Nuggets and Stanley Cup Champion Colorado Avalanche, as well as PA and radio announcer at his alma mater Colorado State University.

A native of Fort Collins, Colorado, he enjoys spending time fly fishing, listening to good music, cooking, hiking and taking photos in the Rocky Mountain region when he can. He is married to the former Angie Jones, and the couple are proud parents to their son Erik.

With Moth’s departure, UofL is seeking a new public address announcer for the Cardinals who will announce at games but not replace Moth’s full-time position.  Interested parties may express their interest and provide samples of work by emailing PA@GoCards.com.  The new voice will be in place for the Cardinals’ Sept. 12 opening football game against Western Kentucky.