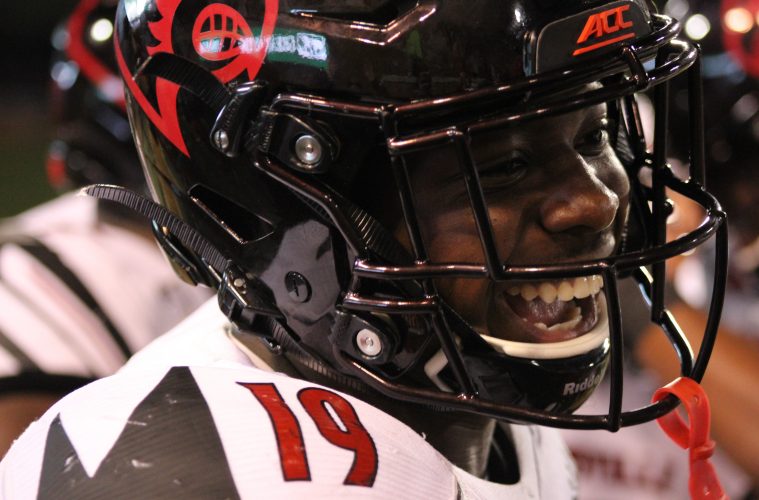 QUARTERBACK & FRESHMAN – Evan Conley, Louisville, Fr., QB, Marietta, Ga.Accounted for 275 yards and three touchdowns – two passing and one rushing – in the Cardinals’ 62-59 win at No. 19 Wake Forest • Finished with a season-high 196 passing yards while completing 12 of 18 attempts • Only the fourth true freshman back in Louisville history to rush and pass for a touchdown in the same game • His 41-yard touchdown run on fourth-and-1 with two minutes remaining gave the Cardinals a 10-point lead • Louisville’s leading rusher in the game with 79 yards.

RUNNING BACK –  Travis Etienne, Clemson, Jr., RB, Jennings, La.Rushed for 127 yards, completed a 23-yard pass and had a 3-yard receiving touchdown in Saturday’s 45-14 win over Florida State • Became the seventh player in school history to surpass 3,000 career rushing yards (3,013) • Honored as ACC Running Back of the Week for the second time this season (also Sept. 3).

RECEIVER – Sage Surratt, Wake Forest, So., WR, Lincolnton, N.C.Recognized as ACC Receiver of the Week for the third time this season following his performance in Saturday night’s 62-59 loss to Louisville • Posted career highs with 12 receptions for 196 yards and three touchdowns • Touchdown receptions covered 12, 3 and 47 yards • His first two touchdowns came in the opening half, and he had seven receptions for 141 yards and another score in the second half • Made four receptions of 20 yards or longer and nine receptions for first downs.

DEFENSIVE LINEMAN – Victor Dimukeje, Duke, Jr., DE, Baltimore, Md.Six total tackles, including thee quarterback sacks/tackles for loss, in Saturday’s 41-23 win over Georgia Tech • Also caused a fumble and had two quarterback pressures • Added a third quarterback pressure on a failed two-point conversion try • Two sacks came on third down to force punts; other sack came on fourth down to change possession • First two sacks helped set up Duke touchdowns • Three total sacks were the most by a Duke player versus an ACC opponent since 2003.

DEFENSIVE BACK – Trajan Bandy, Miami, Jr., CB, Miami, Fla.Made his sixth straight start and had six tackles, a quarterback sack and a fumble recovery to key Friday night’s 17-9 win over No. 20 Virginia • Six tackles marked a career high and were the third-most by a Miami player in the game • Fumble recovery was his first this season, and the solo sack was his third of the year.

SPECIALIST – Hassan Hall, Louisville, So., KR/RB, Atlanta, Ga.Returned his second career kickoff for a touchdown in the Cardinals’ 62-59 win at No. 19 Wake Forest, tying a school record with a 100-yard yard runback • Became the ninth player in school history with over 1,000 career kickoff return yards • Added an 8-yard touchdown run from scrimmage to become the first Louisville player with a rushing touchdown and kickoff return for a touchdown in the same game since Walter Peacock did it against Furman on Nov. 17, 1973 • Hall’s 220 kickoff return yards versus Wake Forest are the second most in school history, trailing only the 247 he registered in a loss at Clemson last season.