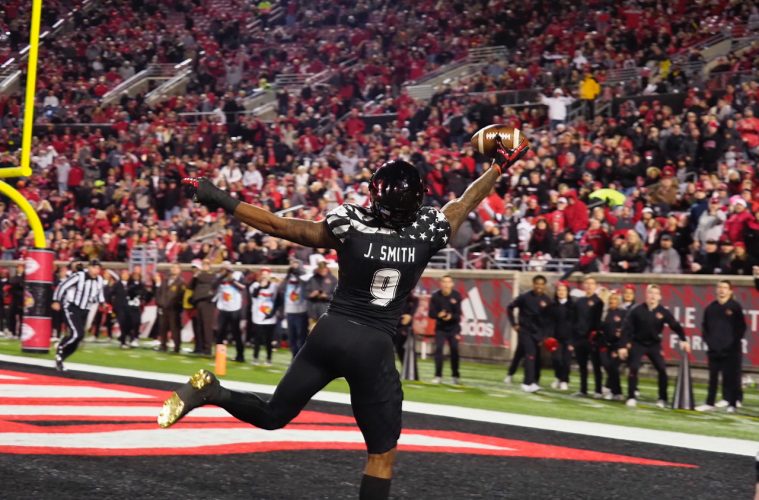 University of Louisville senior wide receiver Jaylen Smith has been named on the 2018 All-Atlantic Coast Conference Preseason Football Team by a panel of 148 voters at last week’s ACC Football Kickoff, the league announced on Tuesday.

Three-time defending conference champion Clemson led all schools with eight selections, while Boston College sophomore running back AJ Dillon received the nod as the ACC Preseason Player of the Year.

Smith, a senior, is one of three wide receivers on the team, joining NC State’s Kelvin Harmon and Clemson’s Hunter Renfrow.

A first team all-ACC selection in 2017, Smith paced the Cardinals with 60 receptions for 980 yards and seven scores. He finished 32nd nationally in yards, while placing second in the league with an average of 98.0 yards receiving per game.

Despite missing three games with an injury, he finished third in the league in receiving yards and was ninth in receptions. His 16.3 yards per reception was the fifth-best mark in the conference.

Named last to the 2018 Biletnikoff Award Watch List, Smith registered a career-best four 100-yard receiving contests, establishing career highs with nine receptions for 183 yards and a touchdown in a 47-35 win over North Carolina. He caught a pair of touchdowns in a win over Virginia and closed the season with seven catches for 107 yards and a touchdown against Mississippi State in the TaxSlayer Bowl.

Heading into his final season, Smith has totaled 116 career receptions for 1,955 yards and is tied for 11th in school history with 14 touchdowns.

The Cardinals open the 2018 campaign on Sept. 1 versus Alabama in the Camping World Kickoff Game in Orlando, Florida. The nationally televised game will kick off on ABC at 8 p.m.