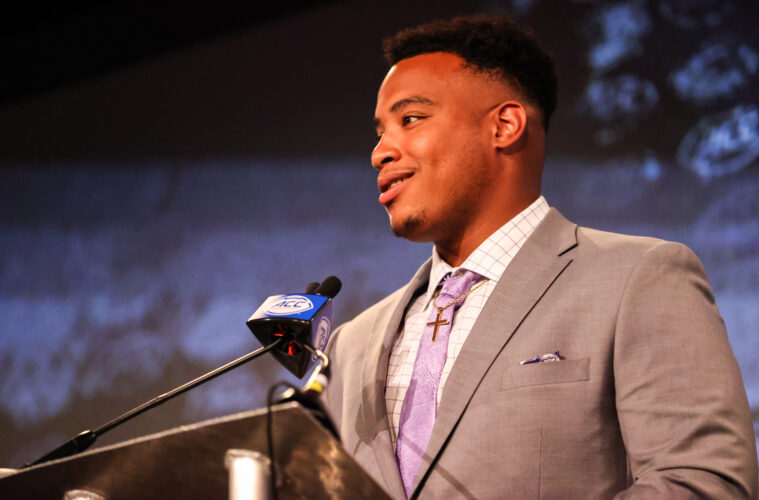 NC State followed with five selections, including quarterback Devin Leary, who was voted the ACC Preseason Player of the Year.

Preseason honors were determined by a vote of 164 media members, including those who were credentialed for last week’s ACC Football Kickoff in Charlotte, North Carolina.

Clemson, which was picked by the media as the likely conference champion in the ACC Preseason Poll released earlier this week, placed a balanced contingent on the preseason All-ACC team with two players on offense and three on defense in addition to placekicker B.T. Potter.

NC State’s Leary is coming off a 2021 campaign in which he became the first and only quarterback in ACC history to hit the 35 (touchdowns)-5 (interceptions) threshold in a single season. He set a new school single-season record with his 35 passing touchdowns, breaking the previous mark of 34 held by Philip Rivers (2003).

North Carolina’s Josh Downs led all players named to the preseason team with 128 votes at wide receiver and was also selected as the team specialist with 57 votes at that position. Downs set program records in 2021 with 101 receptions and 1,335 receiving yards. He ranked third in the ACC (13th nationally) averaging 9.8 yards per punt return.

Syracuse sophomore running back Sean Tucker placed third among all players with 125 votes following a 2021 season in which his 1,496 rushing yards set a program record. Leary and Tucker are joined in the All-ACC preseason backfield by Clemson’s Will Shipley, who rushed 149 times for 738 yards (5.0 avg.) with 11 touchdowns, caught 16 passes for 116 yards and averaged 27.1 yards on 14 kickoff returns as a freshman in 2021.

Perry set the Wake Forest single-season record with 15 touchdown receptions last season, three more than any other player in the program’s history. Flowers’ 122 career receptions rank 12th all-time at Boston College, while his 1,979 receiving yards are 10th on the Eagles’ all-time list.

Miami fifth-year senior Will Mallory led the preseason voting at tight end following a 2021 season with 30 receptions for 347 yards with four touchdowns. All-purpose back Keytaon Thompson of Virginia led the Cavaliers with 78 receptions for 990 yards last season while rushing for 247 yards and four touchdowns.

Clemson and NC State each placed three players on the defensive side of the preseason team following a 2021 season in which the Tigers led the ACC in total defense and the Wolfpack ranked third.

The Tigers earned two spots among the front four as end Myles Murphy (120 votes) and tackle Bryan Bresee (116) led the defensive balloting. They are joined by the Pitt tandem of end Habakkuk Baldonado and tackle Calijah Kancey, who combined for 16 quarterback sacks last season.

NC State’s Drake Thomas (fourth among ACC tacklers last season with 100) led the voting for the three-man linebacking corps and is joined by Clemson’s Trenton Simpson and the Wolfpack’s Payton Wilson.

Potter ranks fourth in Clemson history in career points by a kicker (344) and is the first Tiger to score at least 100 points in three different seasons. Miami’s Lou Hedley, a 2021 Ray Guy Award semifinalist, was the preseason choice at punter after averaging 44.9 yards on 47 punts last year.