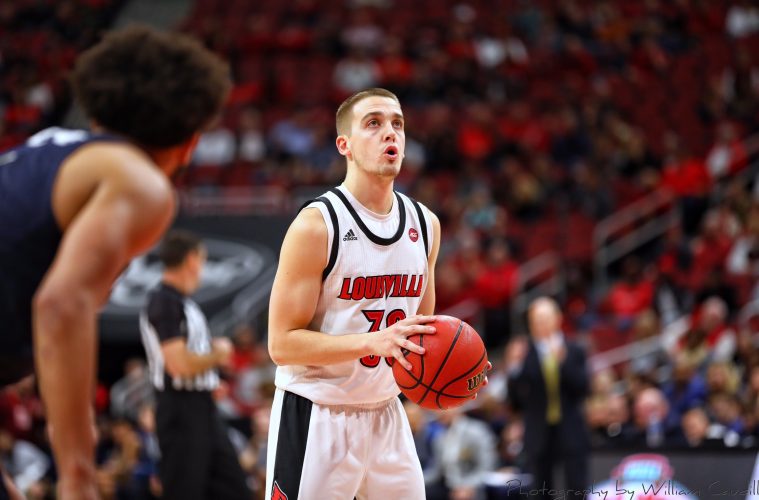 Louisville Senior Ryan McMahon met with the media today to discus his future after having his senior season cut short due to the COVID-19 virus outbreak.

“How the season ended was just, for lack of a better phrase a shock,” said McMahon.  “I would have never expected our season to end that way. I felt like we had a run in us. I know we have a special team. I’ve been on five teams here at Louisville. I know this one was very special.”

He averaged 8.7 points and handed out 57 assists as the Cardinals posted a 24-7 record and a tie for second in the ACC in the 2019-20 season.  Louisville won 91 games over the last four seasons during the period that stretches from the season McMahon first played for the Cardinals after a redshirt year until now (2016-20).

“We were all just kind of shocked at the fact that this is the reality now,” McMahon stated.  “I think it hit me in a few different ways whenever Selection Sunday was supposed to happen and then maybe the first round games were supposed to be starting it just kind of reminded you like dang I’m really not playing. I’ll be watching games on ESPN throwback games and I’ll be like, we could have made history or we could have been making a blockbuster game that people would have been talking about for years and years. So it hits me in waves, but I’ve been trying to stay productive and then do other things to try to keep my mind off of it.”

Being productive has been a key in keeping Ryan’s mind distracted. Between the conversion to online classes or continuing to stay in shape while practicing social distancing.

“I’m still taking online classes right now,” said McMahon. “I’m working out trying to stay in shape. I’m doing little chores and things around here to just stay productive. I’m talking to coaches, talking to agents to try to hire them. People are coming to me with possible job opportunities trying to cipher through those and figure out which ones are worth pursuing which ones aren’t for me. Different things every day.”

McMahon is not sure what will be next for him. It could be playing basketball overseas, NBA/G        League, or pursuing a career other than basketball. There are a few options on the table for him.

“I don’t know what the summer is going to look like in terms of teams looking at players but at one point I’m going to hire an agent,” McMahon said. “Whoever I end up going with will try to get me the best offers or opportunities, whether it’s overseas or the G League if that’s a possibility, we’ll see. And then if I feel like those opportunities outweigh starting my career in something else, then I’ll keep playing basketball. If not, then I’ll have to hang up the shoes and start tearing up some men’s leagues. As of right now I think my option A would be a financial advisor with MassMutual, I’ve had an internship with them this year, just mainly so they could give me study materials if I wanted to pass the insurance exams.  Start working on my Series 6 or Series 7, some of the credentials you need to become a financial advisor.  I’d say that’s option A but I’m open to other options.”

McMahon has even considered coaching as a potential option.

“Our coaching staff all thinks I’m going to be a coach, one day, and I know I’m going to coach at some level at some point in my life,” said McMahon.  “I don’t know what level that’ll be at. I’d love to coach my kids.  I’d also like to coach middle and high school kids. If an opportunity comes in front of me I’d have to pray about it and think about it a lot and just see where that goes. I’d like to pursue other options and other avenues first to see if I can build a passion or a love for something else before I do something like coaching.”

Despite the adversity that McMahon has faced throughout the five years, he feels that the legacy he leaves behind is one of loyalty and effort.

“I think most importantly, I would be a guy that was very loyal and stuck with the program and university through a lot of hard times, the good and the bad,” said McMahon.  “I felt like I was one of the better shooters in Louisville history. I tried to give my all, every second out there on the court to help us get as many wins as possible, not worried about my own stats or my own personal accolades. Overall I feel like the adversity that I went through at Louisville will be my legacy.”