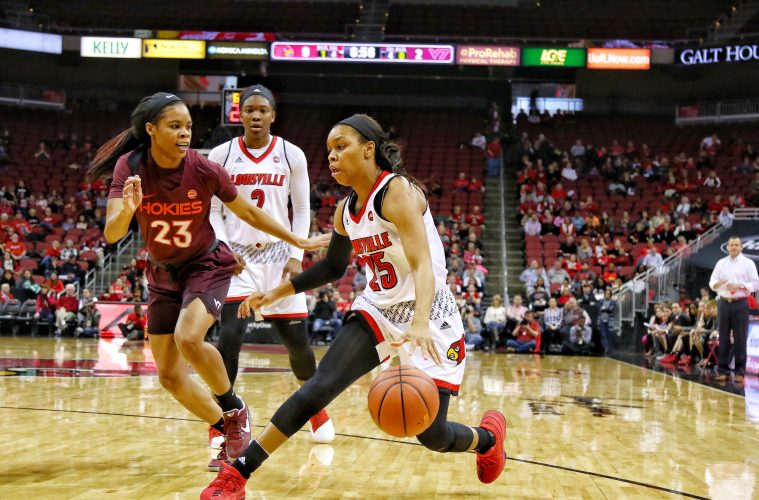 As it has been well documented, the Cardinals enter the game with an 18-0 record, marking the best start and the longest winning streak in program history. They are one of four remaining undefeated teams in the country and their 18 victories are the most in women’s basketball.

Senior Myisha Hines-Allen tied a season high with 15 rebounds in the Cardinals’ 67-56 win over Virginia Tech on Sunday. In doing so, she moved into second place in school history with 953 rebounds, passing Jazz Covington. She now ranks second in school history in both rebounds and double-doubles (35).

She averages 13.4 points per game, which ranks second on the team, and 9.7 rebounds, which leads the ACC and ranks 38th in the country. She leads the ACC with 6.6 defensive rebounds per game and her 175 total rebounds rank 13th in the nation. She has scored in double figures in six of her last seven games and 13 times this season.

After just missing a double-double with 12 points and nine rebounds vs. TSU, she recorded 10 points and 10 rebounds vs. UK to pick up her second career double-double. She tied a career-high with 14 points against Vandy, shooting 4-of-5 from floor and 6-of-6 from the line. She has scored in double figures in five of her last nine games, including her last two.

The Cards look to continue to get off to hot starts against the Irish. Last week, they jumped out to a 21-2 lead against Virginia Tech on Sunday after leading 16-4 early against Duke on Thursday. They got out to a 15-1 lead in the first quarter and led 26-1 midway through the second quarter at NC State.

ABOUT THE FIGHTING IRISH

Notre Dame (15-1, 4-0) enters Thursday’s matchup winners of eight straight with their lone setback an 80-71 defeat at No. 1 Connecticut.

They opened conference play with wins at Wake Forest and Georgia Tech, and with home victories against Syracuse and Miami.

Ogunbowale ranks second on the team with 23 made 3-pointers, shooting 33 percent from deep, while Shepard (8.1) and Young (7.3) are their leading rebounders.

Notre Dame ranks second in the ACC with 84.4 points per game and they are giving up 68.2 points, which ranks 14th.

They are leading the ACC with a 49.0 shooting percentage, ranks seventh in the nation, and 18.8 assists per game, ranks 13th in nation. They have scored 70 points in 15 of 16 games.