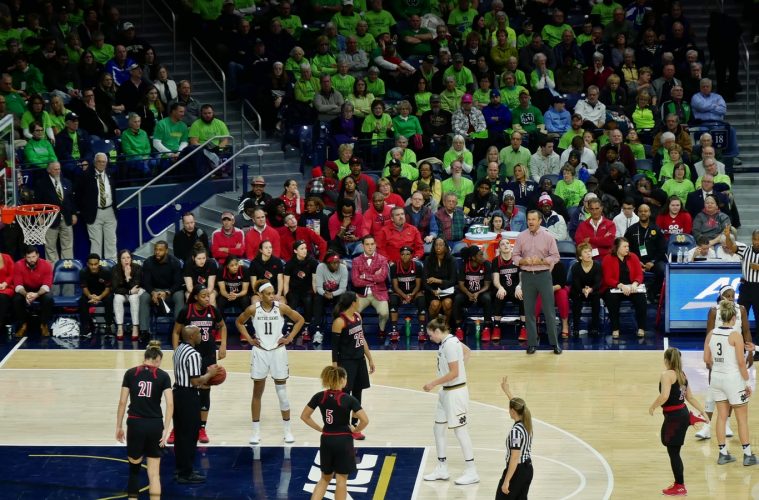 After Further Review: Reflecting on Louisville WBB at Notre Dame

A month ago, if you’d asked me whether I thought a 23 hour day including a nine hour road trip to South Bend, IN was in my future I might have laughed. But here we are, on the raggedy edge. Firstly, one must state the clear fact that Notre Dame is not a university; it’s a brand. Rolling on to that campus is a noteworthy experience whether you like the Irish or not. As an Irish-Catholic boy growing up, Notre Dame gear and weekly Rudy viewings were mandated elements of confirmation classes. So it was impossible not to feel a little tug at the heart string when viewing Touchdown Jesus (aka Word of Life) for the first time in person. But a night at Purcell Pavilion would quickly wash away any remaining shreds of cultural bonds; let’s break it down.

Asia Durr’s supposed slumps just aren’t cut like the rest, as even during a so-called two game slump she was still averaging 11.5 point and 5 assists a game. When the Cardinals needed an offensive spark against the Irish, Durr was ready. 19 first half points on her way to 29 for the night, but more importantly the contribution Louisville needed to go into the half with a two point lead.

Yeah, About Those Fouls

I’ve refereed high school basketball, so I’m typically more understanding towards the plight of officials than most fans might be. The Notre Dame game pushed well past my threshold. Sure, Asia Durr had 19 points in the first half. But the Irish had 17 points off free throws alone. Perhaps Muffet McGraw knew how to bend the ear or perhaps the referees were out of position. Perhaps, perhaps, perhaps. It doesn’t matter, as 29 of Notre Dame’s 82 points would come from free throws. The Irish were whistled for 15 fouls to the Cardinal’s 28, thus granting 39 free throw attempts to Louisville’s 16. In a game with a 14 point final margin, it’s difficult to not find correlation. And as a reminder, the bottom video below tweeted by card_sharp72 was ruled an unsportsmanlike foul…on Bionca Dunham.

With six Cardinals in foul trouble to start the second half, it was inevitable that Jeff Walz would have to call on his bench to put in minutes. In the post-game presser Walz talked about Robinson’s dedication and focus in practice, which he predicts should lead to increased playing time going forward. And given her performance on Thursday night, that can’t be a bad thing. Robinson would contribute all six of her points in the fourth quarter along with a critical taken charge late in the game as the Cards fought to cut the lead to two. It’s great to see such a young player step up, especially in an environment such as a nationally televised showdown at first-ranked Notre Dame.

The Cards were out-rebounded 48-32, with 30 of Notre Dame’s rebounds coming off Cardinal missed shots. Still, I have to give a lot of credit to Sam, Jazmine, Kylee, and Bionca. They played their tails off, and remained aggressive despite mounting foul trouble. This is especially impressive given Notre Dame’s, <ahem>, unique style of play. Muffet McGraw coaches her players to be physical, and it’s clear they know they can get away with it. When Arike Ogunbowale can take a couple of kicks at Arica Carter’s face, and Arica gets reviewed for a possible flagrant foul then you’re obviously on some alternate plane of existence.