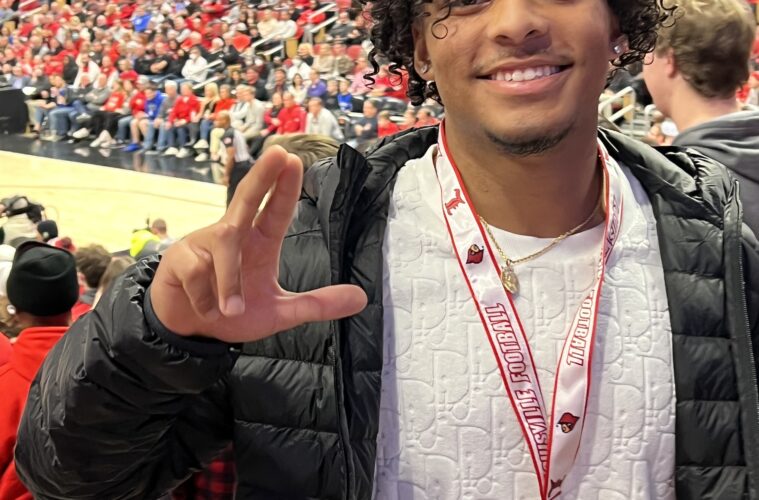 Louisville Football had been pointing to this past weekend for quite some time. A week prior the Cards had also hosted a significant number of targets particularly for 2023.

But with National Signing Day part II for the 2022 class happening on Wednesday (February 2) the Cards also had some work left to do for this upcoming season as well.

This weekend was so big that one source from UofL said that some prospects came to campus completely unannounced for unofficial visits.

Another source said that the unexpected snow on Friday contributed to some ‘epic photos’ and was a treat for some prospects who had never seen snow.

Quarterback Pierce Clarkson kicked things off early on Friday by announcing his commitment with 13 billboards around town. ESPN’s Pete Thamel also dug deep into Pierce’s commitment with an article on ESPN.

Pierce is the 6th highest rated player to ever commit to the Cards and he brought along with him some of his teammates from St. John Bosco. Pierce has visited Louisville several times over the past year and his Instagram and Twitter were active throughout the weekend. Even doing a C-A-R-D-S cheer at Louisville’s Basketball game versus Duke.

Collins is a highly-level 3-star at #378 nationally athlete that can play a variety of positions in college.

Jeremiah Caldwell is an upcoming signee for Wednesday in the 2022 class. Caldwell comes from Michigan high school powerhouse Belleville. Belleville prospects are always advised to sign in the February signing period.

Previously Caldwell was a commitment of the Kentucky Wildcats (1-23-201) and decommitted from UK in August. Many experts thought he would commit to Tennessee, but he did not and instead committed to UofL officially on Sunday.

Antonio Watts is also an upcoming signee for Wednesday in the 2022 class. Watts comes from Carver High School in Columbus, GA.

Watts holds an offer from Syracuse and provides much needed help in the secondary for the upcoming season.

Louisville also picked up a transfer from USC (Southern Cal) on Sunday from Jayden Williams. Williams originally signed with USC out of the 2019 class and held offers at that time from Oregon and Washington.

Williams appeared in 24 games in 3 years for the Trojans, notching 1 INT. With CBs Greedy Vance and Kani Walker the Cards were looking for impact CBs. Jayden Williams will have the opportunity to hit the field quick.

Louisville hosted many other visitors this weekend from all over the country, including current Cardinal commit for the 2023 class Adonijah Green. We’ll keep you up to date when any prospects do make their decisions for UofL. It’s just January for the 2023 class and while that continues to take shape the Cards also got some help for 2022 this past weekend.

Louisville has 1 open scholarship and will open 3 more scholarships at the end of current semester so Louisville isn’t finished with the 2022 roster. Also keep an eye out for transfers out of Louisville following Spring Practice. Rosters are fluid.

As for the 2023 & 2024 classes, I would expect more commitments to ripple out from this weekend especially once we get into the camp season in early summer. Having the QB in place in a class should reap some big dividends. We’ll be watching.