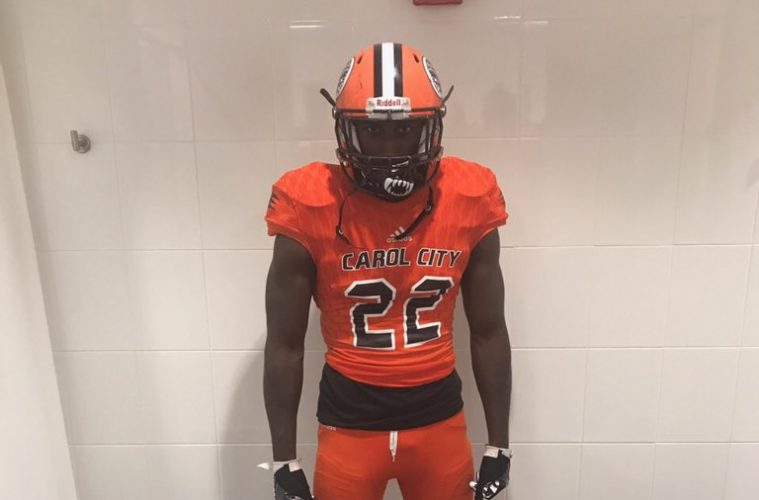 Louisville- “The only ones that never doubted” Yasir Abdullah

Bobby and his staff in recent weeks have had tremendous success recruiting the Sunshine State.  With the addition of Coach Stephen Field as Recruiting Coordinator paired with talented recruiters like linebackers coach Cort Dennison and running backs coach Kolby Smith the profile of the football program and it’s recruiting class #Birdgang18 are reaping the rewards thanks to their efforts in Florida.  Currently with 16 commits, #Birdgang18 is ranked 28th in the most recently updated 247 national rankings and good enough for 5th in the ACC.  The core of the class is built upon solid, promising 3* prospects like 6’2, 225lbs Miami Carol City OLB Yasir Abdullah.  TheCrunchZone.com recently caught up with Yasir to talk about his commitment to the Cards and his Summer progress.

For Yasir, his first recollection of the Cardinal Football Program was Teddy Bridgewayer & the gang’s eye opening, woodshed thrashing of the Florida Gators in 2012.  “I was a little boy and I watched that Sugar Bowl and it was one of the best games I have ever seen.  My pops was a little salty when his team (The Florida Gators) lost, but I was the happiest.”  Since then, the Cardinal Program has had a special spot with Yasir, so when the Cardinals first reached out, he naturally took notice.  “My first contact with Louisville was my 10th grade year at Miramar and Coach Dennison came by to check up on Kaheem Roach (#Birdgang17 commit).” Ever since then Yasir has had the Cardinals on his radar and it wasn’t too long afterwards the Cardinal staff began noticing Yasir and they let their intentions be known.

“That’s the thing that triggered me was they went straight to the point, no brakes about committing.  They kept an eye on me, that’s how bad they really wanted me and I respect them for that. How much time they put into the players first and the bond they have on and off the field. They wanted to get it rolling, that’s what made me want to commit.”

Making the choice of where to play your college ball is a major life decision for an aspiring college athlete and a rite of passage, so picking the right school and being comfortable with that choice is imperative.  It’s good to have solid relationships with the staff and the other guys who are in your recruiting class as well as current players on the team.  It’s that relationship aspect that so many recruits comment about in regard to Louisville that appears to have paid dividends again.  “The relationship I have with them (Coach Dennison, Coach Field, Coach Ward) is like a family bond that can’t be broken.  They were the only ones that never doubted me.  They have faith in me just like I have faith in them.  I have seen their true colors because The Ville is the only one that sent me an Official Offer and I will give my 110% and respect to them.” He also has met and keeps in contact with #Birdgang18 and South Florida prospects Robert Hicks, Chandler Jones and Trenell Troutman.

As proven by Bobby and his staffs so often, recruiting services and their rankings aren’t the end-all-be-all when it comes to identifying talent and measuring a prospects worth.  Bobby’s teams have notoriously been filled with guys who were looked over, under recruited, slept on and not given the respect they should’ve deserved.  A determined player, Yasir is eager to show UofL and its staff that their beliefs in him aren’t misplaced.  “Once I get to The Ville, they’re going to take real good care of me and once they do so, I have to return the favor and that’s by making plays on the field, flying around and being disciplined.”

An impressive athlete, with a nice frame to add additional weight at the college level, he’s a player on the defensive side of the ball you must account for.  Blessed with visible agility that catches your eye, he’s a real playmaker in the open field and great in space; a smart, disciplined player, and physical hitter.  It’s those attributes that lead him to be able to start his Senior Season campaign off on the right foot as his Carol City team took on powerhouse IMG Academy in what was an anticipated preseason matchup.  His Carol City team fell short, but he picked off IMG Academy QB Artur Sitkowski (Miami Hurricane commit) and returned it 78-yards for a TD.  Yasir made numerous plays and tackles throughout the game and hurried the QB on multiple occasions.  It’s play like that the UofL staff believes Yasir will be able to be a difference maker at the OLB spot.  “I’m like a 6’2 225lbs DB.  They want me at OLB and they really like my style of pass rushing.  That’s what they really want me to be used for to get from Point A to Point B in the quickest amount of time.”

While he can’t don the Cardinal Red ‘N Black uniform this year, he’s enthusiastic about the team’s chances in 2017 with returning Heisman QB Lamar Jackson and making it to campus to catch the Cards in action first hand.  “I’m going to watch every game and they’re going to win every game.  The Ville don’t back down to no one!  “I haven’t made it there yet because of Carol City’s football schedule and all, but I’m hoping to be there when Louisville play the ‘Baby Kittens’ (Clemson).”

A hardworking well-grounded person Abdullah hasn’t forgotten the bigger picture, where he comes from or the importance of family.  “I’m going to work hard for the people who stayed and grinded with me, make a living and make something of myself, not just in football, but life.  My parents and my sister really pushed me hard to get to this point.  I will be the second person in my family to go to college, so all the pressure is on me.  They also really taught me how to become a great person, how it’s sometimes not all about me and that peace is the way to go.”

The Cardinal Football program has an impressive and talented 2018 recruiting class in the works and it’s almost assured to only get better as NSD draws near.  The 2018 group is a class that will surely attract some higher rated prospects, but it’s prospects like Yasir that give the class something more important than a star rating, or ranking.  It’s a recruiting class that is shaping up to really address specific needs and most importantly it’s filled with good kids who won’t make headlines for the wrong reasons.  Yasir checks all those boxes for the Cardinal staff this recruiting haul and he undoubtedly is to become a player everybody of #CARDNATION will come to love and follow.  “I want the Louisville Fans to know I love those guys!  With all the support and love they have given me, #CARDNATION better believe that I’m going Quarterback Huntin; It’s that time of year!  GO CARDS!”

You can follow Yasir, his progress and his entire Senior Season on Twitter @YasiirAb His Carol City Chiefs team will begin their season on a neutral field, non-conference game this Friday Aug.25th against Deerfield Beach.