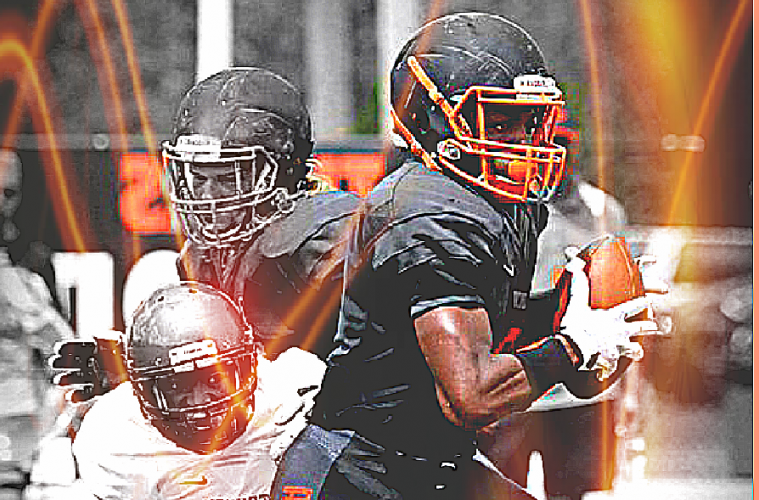 Cardinal Fans have enjoyed several big-time players over the years who were capable of turning any play into a SC TOP 10 Highlight Reel. Take a trip down memory lane and a long list of playmakers come to mind like Arnold Jackson, Deion Branch, Michael Bush, Mario Urrutia, Trent Guy, Devante Parker, Charles Gaines, Gerod Hollimon and most recently Jaire Alexander and Lamar Jackson. Adding #BIRDGANG18 commit Javian Hawkins to that list may not be such a bad idea. The Cocoa HS Tiger product is an electrifying player on the football field with the ball is in his hands. At any moment, the UofL #BIRDGANG18 commit can turn what looks like a simple gain into a play that results in him streaking down the sideline, taking it to the house for 6pts. TheCrunchZone.com recently spoke with the Cocoa HS product about his recruitment and commitment to UofL and what he’s working on until he signs on the dotted line for the Cards.

Bursting onto the scene his Junior Year, Hawkins became a gamechanger in all 3 phases of the game for his Cocoa HS Tigers Football team after transferring from Titusville Astronaut. Finishing his Junior Year, Javian rushed for 670yrds and had 509yrds Rec. with 16TDs (9 rushing, 7 receiving), along with a Punt Returned for a TD, 2 INTs, 1 FF and 1 FFR. To cap off his Junior season, Hawkins churned out 118yrds rushing on 9 carries, which included a 70yrd TD run to help Cocoa HS capture the Florida Class 4A State Title. Since obtaining notoriety after an impressive Junior Season in the Sunshine State, Hawkins hasn’t let his recent success go to his head. A hard worker with a great drive, he’s grinding to check each goal off his lengthy list of expectations he has for himself the next 12mos. Determined to increase his size, Javian added 10lbs of muscle to his frame to get up to 180lbs this Summer. The gains have certainly paid dividends as Hawkins has gotten faster, clocking an improved 40 time and increased his strength upping his bench press of 225lbs. to a max of 15 reps. Javian has been putting in the work so he and his Cocoa HS teammates can repeat as Florida Class 4A back-to-back champions.
Another goal Hawkins had set for himself was committing to a university this Summer so he could focus solely more on his grades and football. Last month he did just that by giving his commitment to Bobby and the UofL staff.

Many knew at a young age Javian was a special player bound for great things. Proving size didn’t matter, he has always been one of the guys who flashed and got your attention with his outstanding playmaking ability. Javian earned the nickname “PLAYSTATION” as a kid in little league football “because of the things I used to do. They said watching me was like watching a video game with a created player.” Big plays became synonymous more and more with his name and reputation from each year to the next and it wasn’t long before UofL’s coaches took notice of the guy they called “PLAYSTATION.” Bobby’s personal interest in Javian and the UofL coaching staff making him a priority recruit proved to be key in Hawkins decision. Head Coach Bobby Petrino offered the dynamic 5’10 prospect at the end of his Junior Year and last month Javian felt more than comfortable giving Bobby and the Cardinal Football Program his commitment.

“Committing to Louisville was a business decision as they’re an ‘IT’ school right now, or as we say ‘LIT’. This may be hard to believe, but I LOVED THE COLORS as a kid and the (Louisville) Brand itself stuck out to me these last few years and they’ve just been on the rise. Teddy and Eli had it poppin, but since Lamar, he’s just taken it to a whole other level. Whenever kids are walking around, running and playing, screaming “I’m Lamar Jackson” it’s a good move I feel. Just everywhere I go it’s crazy! Last night after my game, a Louisville Fan from Clearwater, FL actually took a picture of me throwing up ‘The L.'”

Now that he’s committed, he continues to hear from RBs Coach Kolby Smith, Recruiting Coordinator Coach Field and Head Coach Bobby Petrino. “They just tell me they like my speed and versatility and what I bring to the table. They like how I can play in the backfield, line up in the slot and return kicks and punts. Bobby is an offensive genius when it comes to calling plays. I’m excited for the next 4 years of my life.”

Coming from a football hotbed like the state of Florida there can be a lot of pressure to stay home. “Mostly everyone loves the decision. There’s a few here and there I can tell that don’t support my decision or isn’t for it, but I don’t really care. There’ll always be haters. Down here it’s really deeper than football. The community is pretty much for me and my decision. They think it’s a good school; a little far from home, but a good school. It was my decision and I feel it fits me. I’m beyond happy.”

Before committing to UofL, Javian had few P5 schools offer him even after the breakout Junior season he experienced and recruiting services slept on him. It’s one of the many things that Javian uses to push himself to be the best he can be. “If the game was played on paper, those rankings and websites would mean a lot (to me), but I focus on competing. I had a few other bigger schools offer, but I’ve always been an underdog honestly as I’ve been slept on my whole life, so it’s motivation. My teammates motivate me and my family of course. I got my uncle tattooed over my chest. When I was 15, my uncle, my mom’s brother who was like a brother to me who mom helped raise was murdered at 17, so my grind is a tribute to him.”

With his 2017 Senior Season campaign underway, now it’s time for Javian to start checking off the remaining goals on his list. With statistical goals to put up 27 combined Touchdowns, 2K All Purpose Yards, 4 Interceptions and 6 Forced Fumbles, Javian is well on his way. In his first game against Trinity Christian Academy, Hawkins ran for 185yrds, accounted for 2 TDs, one a punt return for a TD and recorded 6 tackles, including a FF. In the classroom, he’s working to get Straight A’s and get at least a 23 or higher on his ACT.

For Javian, the grind never stops. A well-liked teammate and friend with a charismatic personality, he still has ambitions to improve upon himself as a person by being more open minded as a friend, teammate and family member who is mindful and listens to what his peers have to say. Some of those peers include most of the current members of the #BIRDGANG18 class as they keep in frequent contact with one another. Javian even humble brags that “I actually Facetime Lamar, would you believe that? He’s friends with one of my uncles.” He’ll have the ability to speak with Lamar face to face as he’s working on making that first visit to the City of Louisville and UofL’s campus in 2 weeks when the Cards open their 2017 home schedule against defending National Champions Clemson.

The atmosphere and environment for UofL’s 2017 home opener is guaranteed to be a buzz as thousands of rowdy, rabid Cardinal Fans will be in attendance. It’s the type of game that Cards Fans circle on their schedule and come ready and prepared to make it a hostile environment for their foe that day. #CARDNATION Fans and residents of the city know how to answer the call and make it one every Cards Fan can look back upon down the road and say, “You just knew we were gonna win that game.” It’s that passion as to why Hawkins loves the Louisville Fan Base. He’s confident in himself and the Louisville Football Program and has a special message for #CARDNATION

“LOUISVILLE FANS WHAT’S UPPPPP!! Yall aint seen fast yet! They don’t call me PLAYSTATION for nothing! The type of excitement I bring to the team keeps opponents guessing. I’ve been slept on my whole entire life, until it’s game time. My personal goals are ginormous, but the ultimate goal is to help bring that NATTY HOME! Words can’t explain how excited I am to be a part of #BIRDGANG #LEGACY Don’t sleep on us because this #BIRDGANG18 class that’s coming in is special!!”

You can follow Javian on Twitter @JavianHawkins and catch he and his Cocoa HS Tigers this Friday when they take on the Treasure Coast Titans.