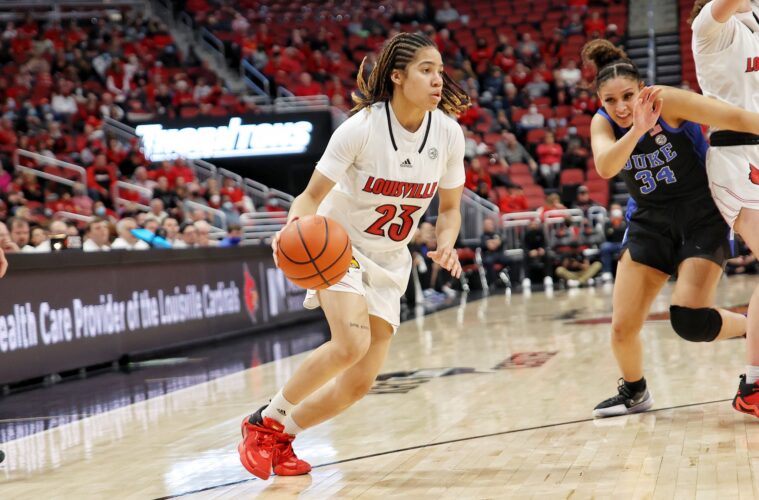 This Louisville team has built a reputation for being a very strong defensive team and it’s become normal to see them come out slow on offense. This wasn’t the case today. Not only was there an aggressive defensive effort, but Louisville was firing on all cylinders. Through the first quarter the team was shooting 44.4% from beyond the arch and 55.6% from the field. Hailey Van Lith was responsible for 3 of the team’s 4 first quarter three-pointers. Louisville also found 12 second chance points in the first half and led No. 21 Duke 45-27 going into the halftime break.

I’m not entirely sure what the officials did during halftime but once again, they came out calling a completely different game. Is it too much to ask for a little consistency? So. Many. Touch. Calls. Before I knew it, Emily was on the bench with her fourth foul of the day and when they couldn’t call them on her, they were calling them on anyone in a basketball uniform. Duke was winning the second half 29-35 with 2:00 left in the game, but the Louisville defense were able to hold them enough to keep the lead through the final buzzer. Former Cardinal Elizabeth Balogun was held to just 5 points, and we were blessed with a few Engstler/Balogun matchups. Duke’s Day-Wilson fouled out with less than one minute to play and 25 points on the day. Louisville snuck away with a win in the rebounding battle, 28-26 and improved their layup performance going 8-11 today.

Hailey Van Lith led the team in scoring today with 17 points. Not far behind her was Payton Verhulst with 13 and Kianna Smith with 11.

Louisville will play their first of three road games this Tuesday, February 1st at 7:00p.m. in Miami. They’ll travel to Clemson on February 3rd and Syracuse on February 6th.