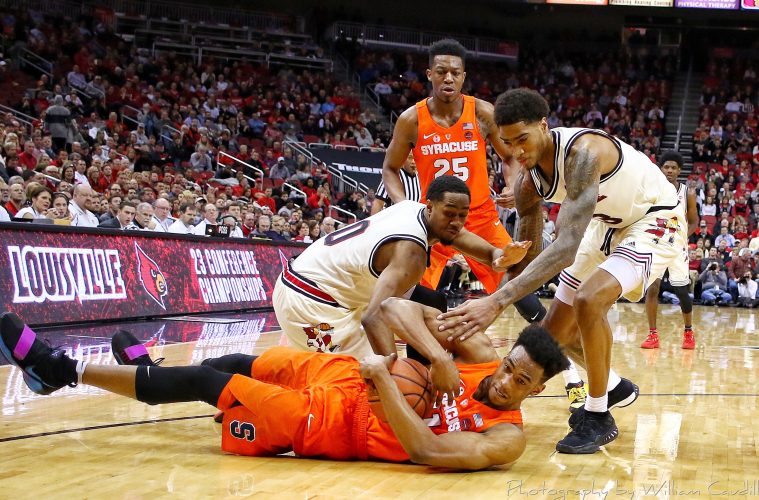 Playing Syracuse in basketball is a lot like kissing. Everybody knows what they’re supposed to do. You’ve probably done it a million times already. Hell, even first-kiss teenagers can nail the basic concept. Then next thing you know you’ve chipped a tooth and you’re sucking a booger out of your partner’s nose. Syracuse: The Chipped-Tooth Mucus of college basketball.

But seriously, when 18th ranked Louisville takes on Syracuse (17-8, 8-4) tonight in the Carrier Dome at 7:00 PM on ESPN we all know what we’re going to get. Jim Boeheim and his vaunted zone defense will, as best as possible, attempt to disrupt the Cardinals’ ball movement and shooting. We all know The Loud House will be loud. It’s just a question of whether or not the pressure (both air and mental) is too much for Chris Mack’s crew.

It’s been said around town that Louisville has, “One-and-a-half guards able to run the point.” I think if the Cards had a set of torso-less legs running around and passing the ball they could probably increase ticket prices. But, as unpleasant as it may be, it’s true that Christen Cunningham and his five assists and 35th-best in the nation 2.5 assist-to-turnover ratio are the heart and soul of this team’s offense. And that kind of ball handling ability is, of course, a key to beating the zone. But CC’s going to spend some time on the bench. And CC’s shooting accuracy (48.3%, 40.0% from three) plus his 10.5 points per game sure would be useful in countering the zone. Enter, we hope, Darius Perry. There’s no doubt Darius has struggled, but is showing signs of turning the corner. It’s quite possible that contesting against the known element of the zone will provide him with an opportunity to stretch his legs and truly come into his own. Perry was one of the bright spots on Saturday vs. Clemson. Hopefully that will carry over to tonight.

Purely as an aside, check out this tweet from Mark Ennis. Louisville probably won’t spend a lot of time with both Enoch and Williams on the floor together, but it does present an interesting possibility. On top of that, it’s just fun to watch.

Broken Clocks And Whatnot

Syracuse has all the trappings of a good team, and even has some wins to make them seem legit. But Syracuse is not a great team. The fact that they’re 8-4 in the conference is, frankly, impressive. And yes, they beat Duke. But they did it with Cam Reddish on the bench, Tre Jones on the bench for 34 minutes, and the remainder of the Duke squad struggling mightily from the perimeter. Plus, Syracuse played like Will Ferrell defeating James Carville at a debate. Tyus Battle nearly doubled his scoring average, and Paschal Chukwu and his height came off the bench for a double-double in which he tripled his rebounding average. The Orange played like men possessed on the night they most needed it. But, on average, their options don’t extend far beyond Battle (17.9 PPG on 45.5% shooting) and post-men Hughes and Brissett. ‘Cuse is, as is typical, reliant upon a defense that’s forcing:

Those turnovers result in an average 19.6 points per game. But the Cardinals aren’t going to have to worry so much about trapping that, so far, has proven to be difficult for them to handle. CC and Sutton can protect the ball fairly well, but Nwora, McMahon, and Perry are going to have to be on their best behavior. The rest is simple, i.e. make the ball go in the hoop.

That’s easier said than done, especially after an afternoon against Clemson where Louisville’s top offensive contributors didn’t exactly show up:

There are going to be lots of of opportunities if Enoch and Williams can connect from mid-range and open up lanes for Sutton. Nwora and McMahon have to shake off the jitters and connect from range. And while we’re hoping Perry can continue his trend, it’s not going to be another game where the Cardinals can hope for he and CC to bail them out.

Syracuse definitely has a size advantage, and we’ve waxed poetic throughout the season about how Louisville’s match-ups against teams with length, as we like to say, has proven to be an Achilles’ Heel. And certainly, Brissett and Hughes (both 6’8″) plus Chukwu (7’2″) in the middle will present a tough time for anyone attempting to penetrate. But physical juggernauts they are not. The Orange have an average -1.0 rebounding margin on the season with an ACC 10th-best 35.4 rebounds per game to their opponents’ 36.4. That’s not to say Louisville is that much better, coming in at a 7th-best 37.3 per game and an average +2.4 margin. But in a game where any advantage can break Syracuse’s defensive rhythm, it’s a chance for Malik and Steven to show their quality.

This is a game that Louisville can and should win. It’s also a game they need to win. Despite Syracuse’s oddities, they are still a Quadrant 1 away game at 48th in the NET rankings. But more critically, it’s the 5th in the ACC 9-4 Cardinals against the 6th in the ACC Orange. The chance at a double-bye in Charlotte next month is too important to squander. It’s by no means a guarantee that Louisville could secure one of the top four spots, but any slip throws the opportunity right out the window.