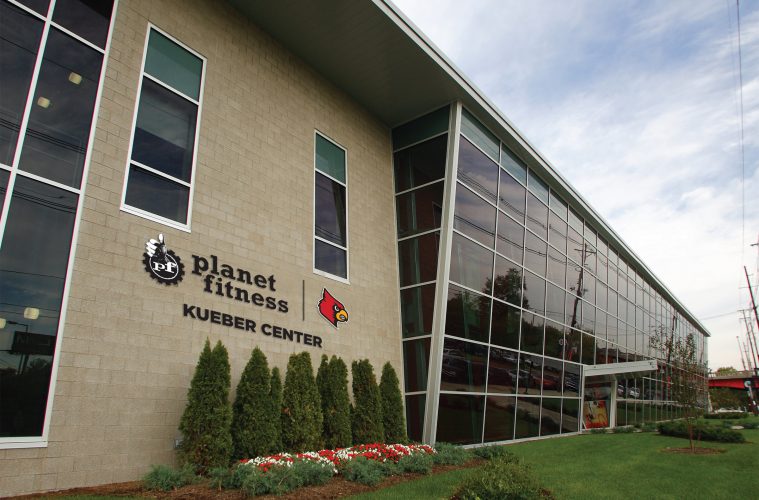 Rick and David Kueber (pronounced KEE-ber), leading Planet Fitness franchisees and co-founders of Sun Tan City, have committed $3 million toward the expansion of the University of Louisville’s campus training facility for men’s and women’s basketball and women’s lacrosse.

“We’re thrilled to be continuing our support of Cardinal athletics with this gift,” said Rick Kueber. “The vision Vince Tyra has for the department and the positive energy coming from Coach (Chris) Mack, Coach (Jeff) Walz, Coach (Scott) Teeter and their student-athletes made this an easy decision for us. We’re proud to have our brand and our name aligned with these programs.”

The Kuebers lead the franchise group who owns and operates the 15 Louisville and Southern Indiana-area clubs as well as 35 other Planet Fitness locations spread over five states (Missouri, Tennessee, Illinois, Arkansas, and Mississippi). At 50 franchise locations and growing, the Kuebers are among the top franchisees in the Planet Fitness system.

“We want to thank Rick and David, as well as their families, for their continued extremely generous support for Cardinal Athletics,” said Vince Tyra, UofL Vice President/Director of Athletics. “They’ve been there for us each time we’ve asked them to step up over the last several years. We are blessed to have them in our community.  We sincerely appreciate their investment as we seek to improve on opportunities for our student-athletes.”

In recognition of the donation, the currently named YUM! Center practice facility on the UofL campus will be renamed the Planet Fitness – Kueber Center, a move approved by the UofL Board of Trustees on Thursday.  Yum! Brands will exit their current naming rights agreement for the practice facility at the end of the year and provide a $625,000 gift to close their commitment.  In addition to naming the training facility, the current Green Lot parking at Cardinal Stadium will be named the Planet Fitness Purple Lot.

“We sincerely appreciate the commitment that Yum! Brands has made to our university as much as to our athletic facilities,” said Tyra. “I recall being in attendance at the unveiling of our practice facility in 2007 and the pride my family felt for YUM! Brands stepping up on the original sponsorship.”

This is the third major gift provided by the Kueber Brothers, growing their support to the university’s athletic department to $9 million over the last 10 years.  The Kuebers previously committed $3 million to UofL in 2008 through their Sun Tan City business for the expansion of the Cardinals’ football complex and another $3 million through Planet Fitness in 2013.

Opened in August 2007, The YUM! Center will be renamed the Planet Fitness – Kueber Center in January and houses training facilities and offices for the Cardinals’ men’s basketball, women’s basketball and women’s lacrosse teams.

The building contains two separate practice courts for both men’s and women’s basketball, separate locker rooms for the three sports teams that train in the facility, two training rooms to support both men and women, as well as a pair of expansive theatres/team meeting rooms.  Also included are spacious offices and conference rooms for the coaching staffs.

The facility, which is located at 2432 South Floyd Street on the UofL campus, contains more than 60,000-square-feet in floor space.  Plans are being formulated to use the Kuebers’ gift to expand the weight room, locker rooms and enhance the entire facility.

Founded in 1992 in Dover, N.H., Planet Fitness is one of the largest and fastest-growing franchisors and operators of fitness centers in the United States by number of members and locations. Planet Fitness has more than 1,600 stores in all 50 states, the District of Columbia, Puerto Rico, Canada, the Dominican Republic and Panama. The Company’s mission is to enhance people’s lives by providing a high-quality fitness experience in a welcoming, non-intimidating environment, which we call the Judgement Free Zone. More than 95% of Planet Fitness stores are owned and operated by independent business men and women.