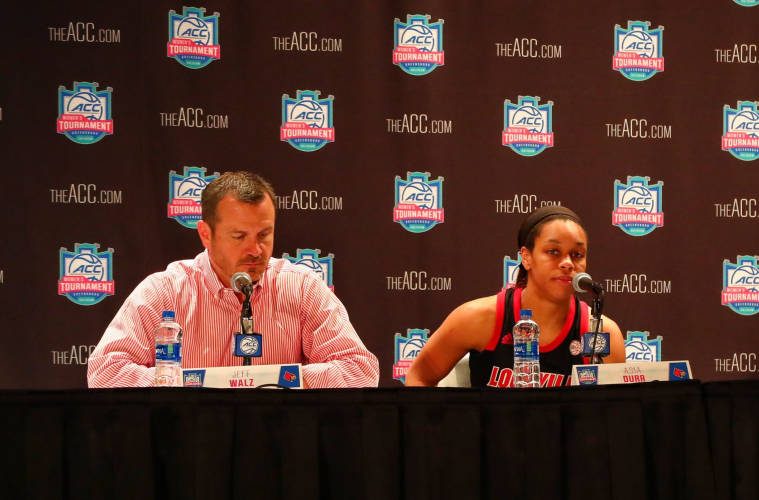 OPINION: What’s in the cards for Louisville WBB?

As someone who’s regularly followed to cover the women’s basketball program, by now I feel like somewhat of a ‘junior’ reporter in my 3 years. I’ve had the pleasure of getting to listen to one of the greatest and most successful coaches to come through the program, meet some of the most talented female athletes in the country and witnessed handfuls of the greatest wins and losses of my memory. This piece is meant to look at the bigger picture successes of the winning-est class in program history. The 2019 seniors became such after the 75-67 win over Clemson in the ACC tournament Quarterfinals on March 8, 2019.

It doesn’t seem like so long ago but at the same time sometimes feels like ages… it was March 20, 2016 and the 3-seed Louisville Cardinals suffered a devastating loss 73-72 to the 6-seed DePaul Demons in the second round and in front of the home crowd. The starting roster featured RS-juniors Briahanna Jackson and Cortnee Walton and sophomores Mariya Moore, Myisha Hines-Allen and Arica Carter. Freshman Asia Durr and Sam Fuehring came off the bench. The Blue Demons won in the final seconds on a made free throw after leading the majority of the game. That loss/game feels like a turning point for this program… (The real turning point was the year of 2013 when the Cards upset Tennessee and Baylor in the tournament. Those victories & the appearance in the national title game with UCONN led to the arrival of many top-rated recruits we enjoy today) for this moment’s sake we will focus on UofL’s winning-est class.

The following year, March 20, 2017, the 4-seed Louisville Cardinals welcome the 5-seed Tennessee Volunteers to the KFC Yum! Center for a second round match up and a trip to the Sweet 16 on the line. No way the Cards would get bounced before the second weekend two years in a row. UofL won 75-64; Asia Durr went 8-22, 1-8 from 3 pt land for 23 points, 6 rebounds and 4 steals. The Cards now had a date with the region’s 1-seed, Baylor Bears, who had beaten their first 2 opponents by 89 and 40 points respectively. Delighted……. I booked my flight to Oklahoma City after it was confirmed there would be a seat on the sideline with my name on it at Chesapeake Arena.

March 24, 2017 – Louisville vs Baylor Friday night 9:30PM with 758 miles in between us. Lets just say… I’ve probably never felt a loss like I felt that 34 thumping the Bears gave to us then. But I know it would go on to inspire the glory that was the following season and Myisha Hines-Allen would solidify her legacy in the books.

2017-18 History making season
The squad started the season 20-0, elevating their rank as high as #2 in the nation, both program bests.
They finished the year at 36-3, which marks the most wins, the fewest losses and the best winning percentage in school history. Including the historic 100-67 win over #2 Notre Dame where Myisha Hines Allen & Asia Durr combined for 67 points equaling the Irish’s overall point total… The team shot 65.1% from the field, 64.7% from 3 point land in front of 12,614 Louisville fans. It was one of the most amazing things to see and feel.
The Cardinals would go on to win the program’s first ACC regular season title and the first ACC tournament title (again over ND, 74-72) which would then lead U of L to received a 1-seed (and the overall) in the NCAA Tournament for the first time.
On March 25, 2018 with a 76-43 win over Oregon State in Lexington, the Cards secured the program’s third ever trip to the Final Four in Columbus, Ohio. Myisha Hines Allen went 7-12 for 16 points, 3 rebounds, 2 assists and 3 steals in the effort.

I can share their excitement for the confetti… I’ll never forget it, girls!

Five days later, UofL would fall to Mississippi State 73-63 in OT in Columbus, Ohio. The historic run would end for Louisville. But that (29-3) Notre Dame team the Cards beat twice already? The Fighting Irish also made it to Columbus and quickly forgot it’s loss in the conference title game to Louisville when they went on to win 6 more and the program’s second national title in historic fashion. I like to think those two losses to Louisville in 2018 (the throttle and especially that 2 point loss in the ACC title) went on to inspire their run in the Final Four.

I hope you are catching my drift as I go on here, Louisville fans…

Two Sundays ago, Louisville suffered its second loss to Notre Dame and third loss of the season in the conference championship game, 99-79, without the healthy help of two of its senior starters of the winning-est class. Arica Carter suffered a knee injury in warm-ups that kept her sidelined for the game and banged up Sam Fuehring (who suffered a fracture of the nose in the semifinal, wore a nose guard to start on Sunday before exiting the game with an ankle injury, trying to return but ultimately deciding she needed to sit) had appeared in only 12 minutes on the game. Back to back ACC titles would not be in the cards for this squad. We can try for that campaign again next year but for now….

Since then we’ve learned that Carter and Fuehring will return to play in the NCAAs and that this 29-3 team earned a 1-seed in the tournament for the second time in program’s history, making it the first back to back year for top seeding. The Cards lost only Hines-Allen to graduation from last year’s Final Four run.

If you haven’t caught on by now I guess I’ll have to spell it out for you… I’m saying a new win streak begins FRIDAY!

Louisville opens the first round of the NCAA tournament against Robert Morris at the KFC Yum! Center at NOON.

Get your tickets now, call into work. You’ve got plans this weekend, #Cardnation. Let’s go win 6. We’re going for confetti in Tampa.