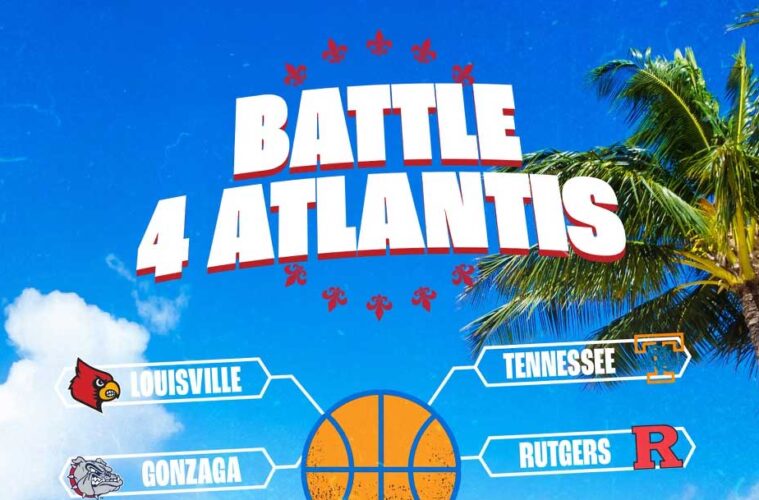 LOUISVILLE, Ky. — The Louisville women’s basketball team will see a familiar foe in its opening game of the Bad Boy Mowers Battle 4 Atlantis Tournament. The Cardinals open the three-day tournament with Gonzaga on Saturday, November 19 from Paradise Island in the Bahamas.

Louisville and Gonzaga met last season in the second round of the NCAA Tournament at the KFC Yum! Center. The Cards came out on top with a 68-59 victory to advance to the Sweet 16 for the fifth-straight season. The win also capped a perfect 16-0 record at home in 2021-22, the first time the team has achieved that feat at the KFC Yum! Center. Four Cardinals scored in double figures led by 21 from Hailey Van Lith. It was her second of what would be four-straight games with 20-plus points in the NCAA Tournament last season.

Game two of the tournament will be on Sunday, November 20 and the Cardinals will either face Texas or Marquette. Texas won 29 games and reached the Elite Eight in last year’s NCAA Tournament. They defeated Ohio State in the Sweet 16, which is another NCAA Tournament team the Cardinals will face in the non-conference schedule this season. Marquette won 23 games last season and advanced to the third round of the WNIT.

The final game of the tournament is set for Monday, November 21, and the Cardinals will face one of four teams from the other side of the bracket. Those four teams include Tennessee, Rutgers UCLA and South Dakota State. Tennessee reached the Sweet 16 before falling to the Cardinals in Wichita, South Dakota State won the WNIT and UCLA reached the WNIT semifinals before falling to the Jackrabbits.

This will be the second year of the Bad Boy Mowers Women’s Battle 4 Atlantis Tournament from Paradise Island. The inaugural tournament last year was won by South Carolina, the eventual 2022 National Champion.