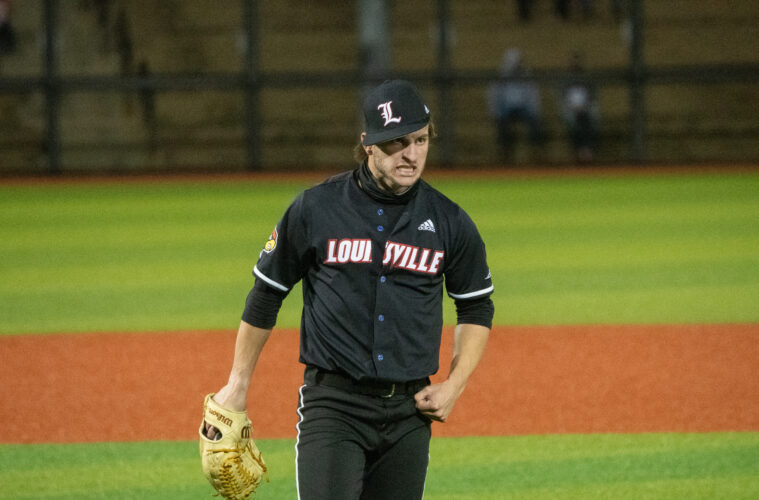 The No. 9 Cardinals played game one of their ACC home opener tonight against No. 13 Boston College. After a string of bad luck, they were able to get their second win of the week with a 7-3 victory.

Michael Kirian got the start on the mound for game one and struck out the first batter at the plate. Regardless, he still had some trouble settling in after that. The next batter grounded out and Kirian followed that by giving up two back-to-back singles. A throwing error would give Boston College their first run of the game before a fly out ended the inning. When it was Louisville’s turn to step to the plate, they came up with nothing as they were retired in order. The top of the second inning was a long one for the defense. The Cards gave up a hit and allowed Boston College to score two unearned runs. Louisville quickly found themselves down 3-0 early in the game. Louisville was able to find a little bit of steam in the bottom of the second when Cameron Masterman hit a home run down the rightfield line. It was immediately followed by a triple from Luke Brown and an RBI double from Lucas Dunn. The Cards now found themselves just one run behind the Eagles with one out on the board. They got their second out when Trey Leonard was thrown out at second. Knapczyk drew the walk during his at bat giving Louisville runners on first and third with two outs on the board. With Cooper Bowman at the plate, Dunn was able to make it home on a wild pitch. Bowman would then come through with an RBI single to send Knapzyk home giving Louisville a 4-3 lead.

The top of the third inning looked to be stick when Boston College loaded the bases with just one out on the board. Luckily, Michael Kirian came through with back-to-back strikeouts getting the Cards out of the inning without giving up any runs. The bottom of the third was a quick stand for Louisville. Henry Davis led off with a fly out before Binelas drew a walk. The inning would end with a fly out from Masterman and a ground out from Brown. Kirian sent the Eagles down in order in the top of the fourth leaving Dunn, Leonard, and Knapczyk to get things started for Louisville in the bottom of the inning. Lucas Dunn was able to draw a leadoff walk, but Leonard would come up short with a ground out, but Dunn would advance to second. With Knapczyk at the plate, Lucas Dunn was able to get to third on a passed ball. Knapczyk drew the walk on a 3-2 count putting a runner on first and third for the Cards with just one out. Knapcyzk was able to steal second and when the pass wasn’t caught, Dunn attempted to steal home but was thrown out. Cooper Bowman struck out swinging to end the inning.

Kirian added two more K’s to his stat line in the top of the fifth giving him a new career high of seven. The Cards would give up no runs and keep their one run lead going into the bottom of the inning. Levi Usher drew a leadoff walk in the bottom of the fifth and stole second base before Henry Davis fouled out. Binelas also drew a walk and with Cameron Masterman at the plate, Binelas was able to steal second when Levi Usher stole third. Boston College intentionally walked Masterman giving the Cards loaded bases with one out. The second out would come when Usher was out at home, but Louisville still had the bases loaded with Lucas Dunn at the plate. He drew the bases loaded walk giving Louisville a two-run advantage. Trey Leonard struck out swinging leaving three on base, but the Cards would go into the sixth with the 5-3 advantage. Michael Kirian finished his day with 5 IP, 7 K’s, and 3 runs, all unearned. Adam Elliot took the mound for Louisville in the top of the sixth and walked his first batter. Baldelli was able to advance to second on a ground out before moving to third on a wild pitch. Elliot got his first strikeout of the day when he faced Frelick and looked to be settled in when he would get a second K to end the inning, preventing any Boston College runs. Louisville went down in order in the bottom of the sixth, putting Adam Elliott back on the mound sooner than expected. The first two batters for Boston College in the top of the seventh would fly out and ground out, leaving a perfect situation for Louisville to make it a quick inning. Elliott hit the batter sending him to first and the pinch runner was caught stealing, leaving Boston College short of tacking on any runs in the seventh. The Cards went down in order in the bottom of the seventh, giving them back-to back innings of coming up short.

Boston College was able to tally a hit in the top of the eighth but would add nothing to their score before getting their third out. Adam Elliot did, however, add another K to his stat line during the inning. Luke Brown led off for the Cards in the bottom of the eighth and took a pitch to head sending him to first. (He was ok.) Lucas Dunn sent a single to right field that would advance Brown to third, and a throwing error would advance Dunn to second and send Brown home to give Louisville the 6-3 lead. An RBI single from Knapczyk sent Dunn home and added another run to the Louisville lead in the bottom of the eighth. A double play would end the inning, leaving the Cards in need of just 3 outs to add another win to their resume. Adam Elliott got the save in the 9th when he struck out the side in order. Louisville moved to 6-0 in ACC home openers after adding this 7-3 win to their resume.

The Cards will face Boston College tomorrow for game two of their series. First pitch is scheduled for 1:00. Tickets are sold out, but you can view the game on ACCNX or listen to the soothing sounds of Sean Moth on 93.9 The Ville.