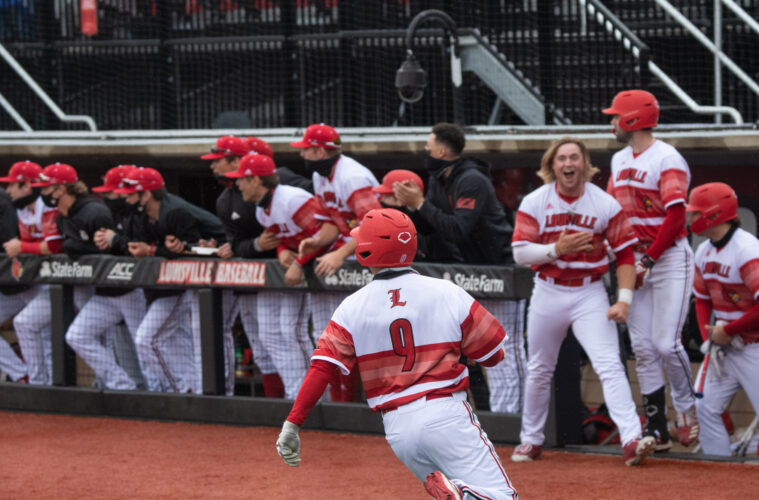 No. 9 Louisville Sweeps No. 13 Boston College

No. 9 Cardinals Finish Sweep of No. 13 Boston College

The Cardinals rallied for an 8-6 victory on Sunday at Jim Patterson Stadium.

LOUISVILLE, Ky. – Led by a late-inning comeback, the ninth-ranked University of Louisville baseball team completed a three-game sweep of No. 13 Boston College with an 8-6 victory on Sunday at Jim Patterson Stadium.

Louisville (11-4, 4-2 ACC) found itself trailing 6-4 late, but rallied for four runs in the eighth inning to help secure the win.

Down by a pair, Cameron Masterman opened the eighth with a single to right field before Lucas Dunn was hit by a pitch. After a flyout, Levi Usher laid down a bunt and beat the throw the bag, and a wild throw allowed Masterman to touch the plate and bring the Cardinals within one.

Christian Knapczyk then delivered the game-winning blow, lining a 1-2 pitch into the right-centerfield gap for a two-run triple to give Louisville the lead. The freshman would later score on a squeeze bunt from Luke Brown before the Cardinals handed the ball to Kaleb Corbett, who would lock down the ninth for his second save.

Louisville fell behind early after giving up two runs in each of the first two innings. Henry Davis was able to get one of the runs back with his fourth home run of the season in the third, but the Cardinals remained on the wrong end of the scoreboard until the fifth.

After the first two hitters of the fifth were retired, Cooper Bowman started Louisville’s offensive attack with a double into the left field corner. Brown followed with a single back through the middle that scored Bowman, and Davis rifled a single to right to put runners on the corners. Alex Binelas then sent a double into left-center that scored both runners and tied the game at four.

Boston College (9-5, 2-4) regained the lead in the seventh, plating a pair of runs on a one-out double.

Davis registered the first four-hit game of his career on Sunday, coming up just a triple shy of the cycle. Nine different Cardinals registered at least one hit in the game.

Jack Perkins (1-0) tallied his first win of the season with 2.1 innings of relief work. Garrett Schmeltz had a strong relief outing as well, striking out three over 2.2 scoreless innings.