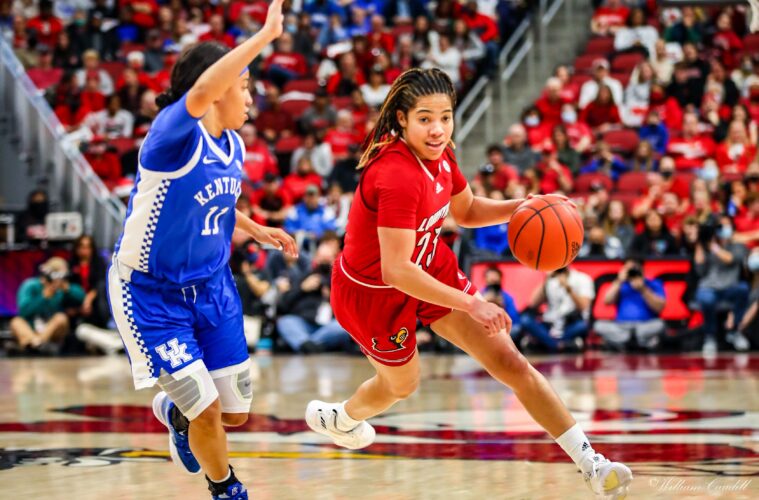 No. 7 Louisville Gets Their 5th Straight Win Over Rival Kentucky

Can I cuss here? I’m not sure… I won’t do it, but I want to. The officiating in women’s basketball is historically bad, but it was top tier bad at the Yum! Center this afternoon. Despite the two technical called on Olivia Cochran and Mykasa Robinson, as well as a horrible baseline call, the No. 7 Cardinals still came away with a 64-58 victory over rival and No. 14 ranked Kentucky. Their 5th in a row… but hey, who’s counting?

The Cards were shooting 40% from the field and tallied up 37 rebounds, with 24 of them coming on the defensive end. While the offense was lacking at times going 13-22 on layups and 4-13 from the three-point line with 13 turnovers, the defense held up it’s end of the bargain. Kentucky had a total 21 turnovers partially due to Louisville’s defense and their 6 blocks and 10 steals, while also holding Rhyne Howard to just 9 points and scoreless in the second half.

It’s not hard to argue that Chelsie Hall had the best offensive game today, leading the team in scoring with 15 points. She was followed by Ahlana Smith and Hailey Van Lith who each had 13 points. On the defensive end of the court, it was Emily Engstler who was leading the charge with 9 defensive rebounds, 2 blocks, and 2 steals.

Louisville will host Eastern Kentucky University on Thursday, December 16th at 8:00p.m. Est in the KFC Yum! Center before traveling to Connecticut to face off against No. 3 UConn on Sunday, December 19th at 3:30p.m. est. The EKU game will be aired on ACCN and can be heard on 790-AM. The Cards game Sunday against UConn will be on ESPN. Following Sunday’s game, myself and Dave Scull will be hosting a post-game show on either ESPN680 or 93.9 The Ville.

Louisville is now 8-1 on the season and will stay within the top 10 when rankings are released this week.