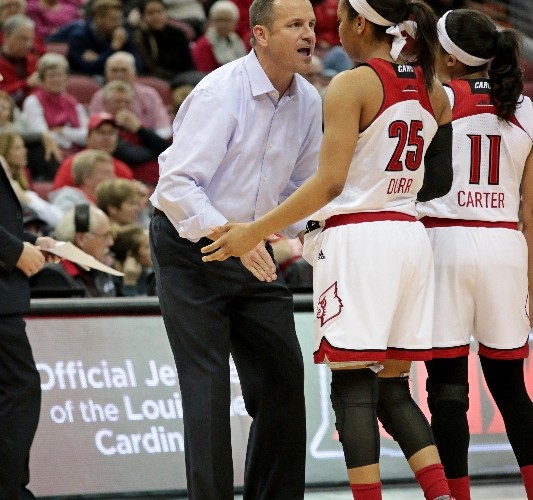 Myisha Hines-Allen had 18 points and 10 rebounds, and the University of Louisville women’s basketball team earned a 56-45 victory on Thursday evening in the KFC Yum! Center.

Briahanna Jackson scored 13 points in the win for the Cardinals (11-5, 3-0 ACC), and Louisville turned the ball over just 12 times and shot 60 percent in the final period to record its eighth-consecutive victory.

Louisville’s defense, which has continued to improve over the last 11 games, held Virginia Tech (13-2, 1-1) to just 37.2 percent from the field and forced the Hokies into 21 turnovers. The Cardinals’ victory also halted the Hokies’ 11-game winning streak, which was the fifth-longest active streak nationally.

Ironically, for a contest that saw stellar defense the entire night, Jackson was honored at the end of the game for reaching her 1,000th-career point following a layup with 15 seconds to go in the contest. The redshirt junior accumulated 769 points at UCF and boasts 232 through 16 games at Louisville.

“There is no other place I’d rather get it,” Jackson said. “I am so excited. I didn’t even know I was even close and it was a great surprise and I’m really happy to share it with this team and this program. It’s a memory.”

The Cardinals took hold of the game in the second period, outscoring the Hokies 18-5. Hines-Allen, who registered her fourth double-double of the season and fifth in her career in the win, scored nine points in the quarter on 4-of-9 shooting. Louisville received a spark off the bench from freshman Asia Durr, who tallied six of her 10 points over 10 minutes.

Louisville opened the period on an 8-0 run and forced Virginia Tech into three turnovers, while holding the Hokies to just four field goal attempts through the more than six minutes of play. Virginia Tech made its lone basket on a layup by Chanette Hicks at the 4:31 mark.

The Hokies turned the tables after halftime, limiting the Cardinals to a season-low five points in the third quarter. Despite Louisville hitting just 2-of-14 from the field, including a 3-pointer, in the period, the Cardinals entered the final period with a five-point advantage.

Virginia Tech’s Taijah Campbell cut the deficit to three on a layup at 9:34 mark before Louisville used another run that pushed the lead to double-digits. Durr hit a jumper in the paint, Hines-Allen connected on a pair of free throws and a jumper later in the run, and Jackson scored on a layup and jumper that gave the Cardinals a 46-35 advantage.

Cortnee Walton was instrumental on the boards again for Louisville, which totaled double-digit offensive rebounds for the 10th-consecutive game. Walton had seven of them, finishing with 11 boards to go with four points and three assists.

Hannah Young led Virginia Tech with 16 points on 6-of-11 shooting.