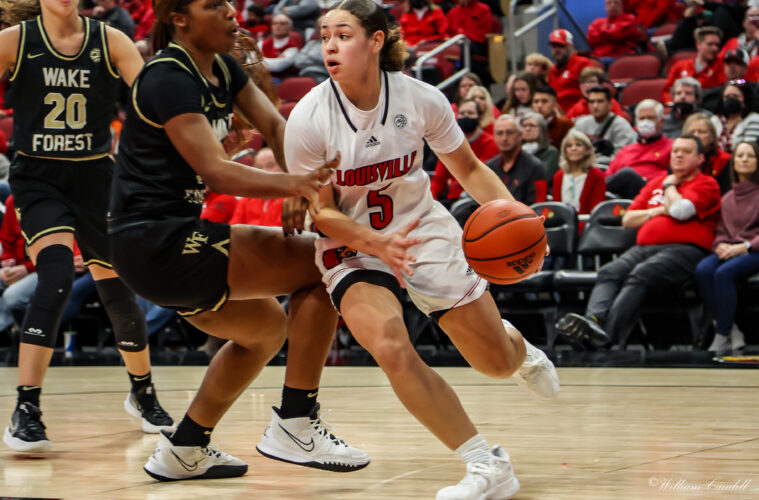 No. 5 Louisville got the job done tonight with a 13-point win over Florida State University.

The first quarter was another slow and sloppy start for Louisville, but they quickly settled into their elite defensive play which helped create their offense. By the end of the first half 7 different Cardinals had points on the board and they were dominating in the paint with 18 points. It was block city in the first half as well with Liz Dixon and Emily Engstler combining for 7 total while Mykasa Robinson racked up 3 first half steals. In a game Everyone on the court was playing with aggression and passion which led to Louisville having a 36-25 lead at halftime.

The Cards continued to play with high energy in the second half shooting 45.2% from the field and adding 14 more points in the paint. Louisville’s defensive efforts continued to shine through the last 20 minutes as well with the team adding 11 more defensive rebounds, 2 blocks, and 2 steals to their total. Emily Engstler added another double-double to her resume with 19 points and 12 rebounds as well as 5 blocks. Olivia Cochran wasn’t far behind with 17 points of her own and Mykasa Robinson finished her night with 9 points and 4 steals.

After the game Coach Walz talked about taking care of the basketball was a big part of the game today. They’ll review the number of layups missed but he thought they did a really great job passing the ball. He credits Morgan Jones, who had 28 points tonight, stating she’s a pro.

When asked about the bench play tonight Coach Walz says they were really big and goes on to say Mykasa is impressive because he knows what she’s going to do every night. He also added that they are a deep team and everybody steps up on any given night. He also says the depth will be very important over their 9 day stretch with 4 games.

The Cards will host No. 21 Duke at the KFC Yum! Center this Sunday at 3:00. The game will be aired on ESPN.