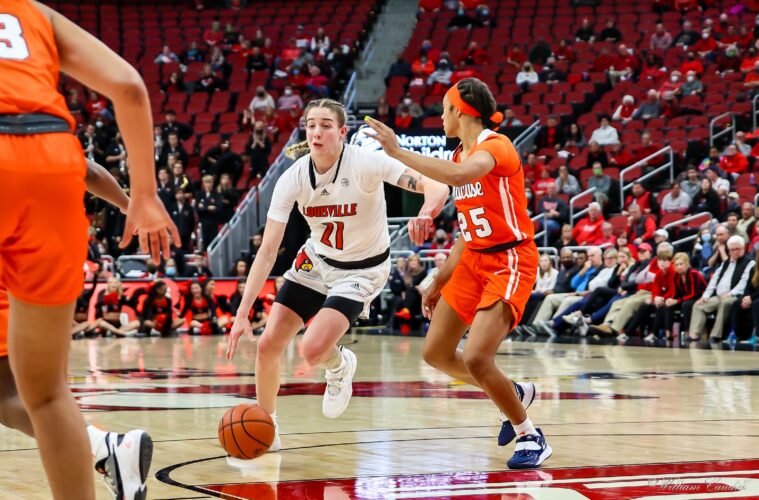 No. 4 Louisville Wins Big At Syracuse

No. 4 Louisville finished a three-game road trip at Syracuse today and came away with a 100-64 win after an extremely well-balanced game.

The Cards came out hot on the offensive end today with 8 different players scoring in the first quarter. They had impressive ball movement through the first half, making it well known that anyone on this team can score. By the end of the first half, all nine players that had seen the court had points on the board. Louisville had 30 first half points in the paint as well as 23 rebounds and 14 team assists. The defense was able to hold Syracuse to 7 points in the paint but struggled to defend beyond the arch giving up 7 three-pointers.

Louisville took over the game in the second half with 17 third quarter boards. Engstler picked up her fourth foul early in the third quarter but that just opened things up for Liz Dixon and Olivia Cochran to come in and make a statement. Dixon had 12 second half points and finished her day as the leading scorer with 18 points and 7 rebounds. Kianna Smith followed with 16 points and 6 rebounds. Emily Engstler had her 7th double-double of the season after scoring 11 points and racking up 10 boards. The Cards had 6 players in double-digit scoring and 2 in double-digit rebounding. They also dominated the paint with 60 points. The defense also had 8 steals and 7 blocks today.

Jeff Walz and company head back home this week to host Virginia on Thursday night before welcoming Notre Dame to the Yum! Center on Sunday.