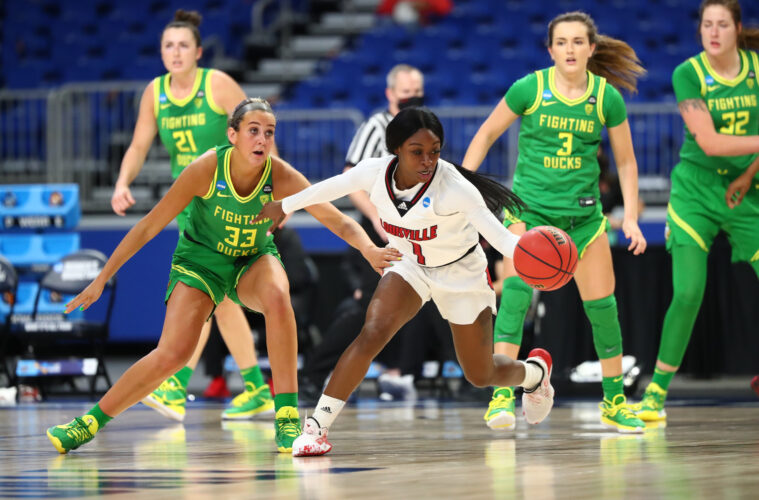 No. 2 Louisville Advances To Elite Eight After 60-42 Win Over No. 6 Oregon

No. 2 Louisville faced off against No. 6 Oregon in a Sweet Sixteen battle tonight and came away with a 60-42 win.

Both teams were off to a slow scoring start in San Antonio today. Louisville was shooting 25% at the end of the first quarter while Oregon was shooting 26.7%. This gave the teams a combined 18 points through the first ten minutes of play. Mykasa Robinson was back with big plays making passes and grabbing boards that led to effective Louisville offense and defense. The Cards had incredible ball pressure, which was important against a team that has as much height as Oregon. Louisville put on a defensive clinic in the second quarter and held Oregon to just 14 points in the first half. The Cards forced 8 Oregon turnovers in the first half and outrebounded the Ducks 24-19. Dana Evans made it clear that she was out of her shooting slump when she put up 13 points in the first half. At one point she had made four shots in a row and was on a mission to stay in Texas for a little bit longer. Things were looking good for Louisville going into the halftime break with a 29-14 lead.

Coming out of the half, Louisville allowed Oregon to go on a 9-0 run cutting the Cards’ lead to 11 points. Their shots went cold, and the defense started to lack. It wouldn’t last long. Dana Evans added 16 points to her total in the second half and Mykasa Robinson added 5 more rebounds to her stat line. Louisville found their drive and never looked back. At one point in the fourth quarter, Evans went on a 7-0 run to remind the world that her team was not going home any time soon. The Cards were able to force 6 more Oregon turnovers in the second half for 9 points. Dana Evans led the team in scoring with 29 points, which ties her career high. Mykasa Robinson and Hailey Van Lith led the team in rebounding with 7 each.

After the game, Dana Evans said they came out with a lot of intensity tonight. She said she didn’t focus on her shot today, she focused on defense and getting her team going, which opened up the game for her. On her pregame call from Asia Durr, Dana said Asia told her to relax and let the game come to her. When asked about the team’s defense Evans said that the team is playing their best defense right now. They know at this time of year; you can’t make mistakes and defense wins championships. On Mykasa Robinson, Evans said that her basketball IQ is extremely high and nothing she does surprises her teammates.

Coach Walz started his post-game press conference by giving Oregon credit for a great season and followed it by saying how proud he is of his team. Coach Walz said he did not facilitate the call from Asia to Dana, the players know this is a family and they stay in touch with each other. He went on to say that Dana did a good job of letting the game come to her and when she does that, she is able to get shots in rhythm. When asked about his pregame speech, he said he completely changed it up and that it was more of a plead for his team to play well. He stated he was really happy with how they came out and defended.

Louisville will move onto the Elite Eight and face No.1 Stanford this Tuesday night at either 7p.m. or 9p.m. on ESPN. The Cards are the only ACC team left in the tournament.