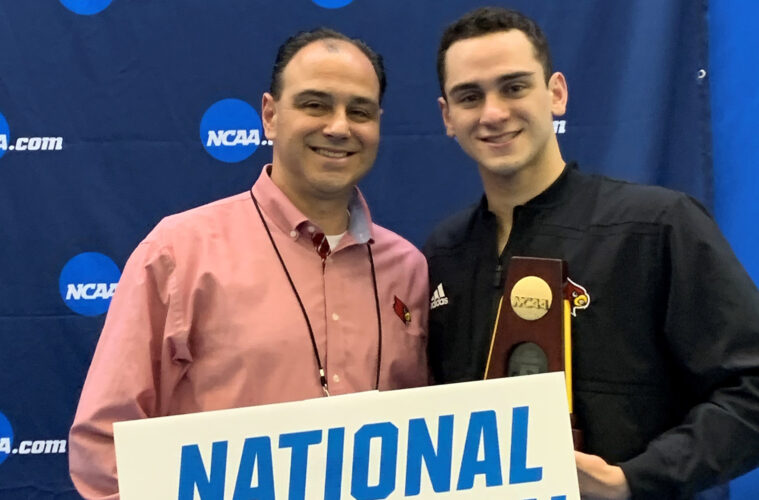 On the fourth and final day of the 2021 NCAA Men’s Swimming and Diving Championships in Greensboro, N.C., University of Louisville Cardinal Nicolas Albiero became a National Champion.

Albiero used a stellar back half to win the 200 butterfly in 1:38.64, just two-tenths ahead of runner-up Trenton Julian of Cal. His time eclipsed his own school and pool record of 1:38.65 set at the NCAA Championships in 2019.

The senior earned individual All-American honors for the third time this weekend and the sixth time in his career. His time of 1:38.64 remains the fifth-fastest performance in history.

Albiero became the third Cardinal men’s swimmer to ever win an individual title on the national stage, joining the likes of Carlos Almeida and Joao De Lucca. His record-breaking swim also solidifies himself as the fifth Cardinal to be named an NCAA champion behind Almeida, De Lucca, Kelsi Worrell Dahlia, and Mallory Comerford.

Mitchell Whyte dropped a half-second from his morning swim to win the consolation final of the 200 backstroke en route to placing ninth overall. His final time of 1:40.00 edged out Georgia’s Ian Grum by .01 and is the second Honorable Mention All-American accolade of his career.

Whyte, who is just the second Cardinal in program history to qualify for an NCAA final in the 200 backstroke, surpassed his best-ever NCAA finish of 11th in 2019.

Sameh’s leadoff split of 41.94 was also the second-fastest time in program history

Louisville matched their program-best fifth-place finish with 211 points, just one point shy of their record 212 points from 2019. Texas swam away with the team title with a score of 595, followed by Cal (568). Florida (367), and Georgia (268). The Cardinals were just four points ahead of Indiana, who took sixth.

The 2021 ACC Champions were also the highest-scoring team in the conference. NC State finished eight with 164 points with Virginia taking ninth with a score of 152.

Diving in his first-ever NCAA Championships, Kivanc Gur dove to 20th on the platform event with a final score of 317.90. He is the first male diver to qualify for NCAAs since Sean Piner in 2016.