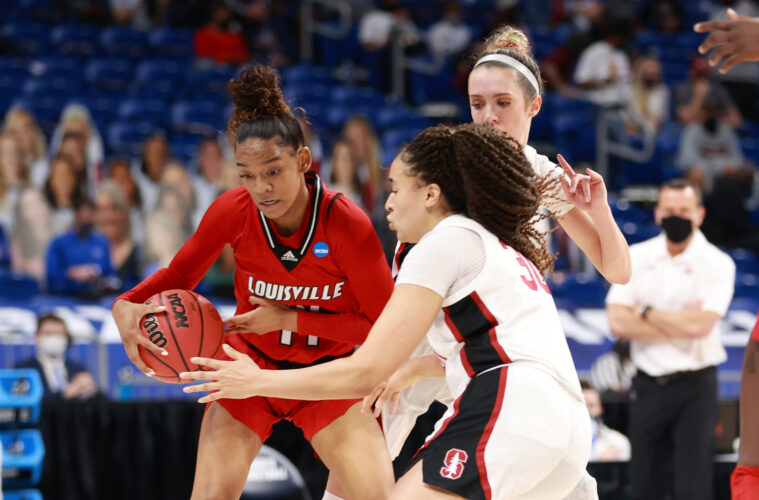 No. 2 Louisville Falls To No. 1 Stanford In Elite Eight

No. 2 Louisville lost a tough Elite Eight game against No. 1 Stanford last night, ending their season two games too soon.

Going into this game the Cards knew they would have a battle on their hands. They were going to have to bring aggression and determination to the floor to make their run to a final four. Things were really clicking for Louisville in the first half. The Cards were shooting 51.6% through the first half and they were 6-10 from the three-point line. Dana Evans led the way with a feisty demeanor and found herself in double-digit scoring by the halftime break. Mykasa Robinson was on the court making her presence known with 2 steals and 2 rebounds, both defensive. But it was Kianna Smith who was really shining. She wasn’t leading the team in scoring, but she had a timely 8 points plus 6 rebounds and 2 assists. Louisville was able to force 7 Stanford turnovers, resulting in 4 points and tallied 20 points in the paint. They were bringing every bit of aggression they needed in their most important game of the season.

Despite their impressive efforts in the first half, Stanford came out in the third quarter and went on a quick 12-2 run to cut the Louisville lead to just 4 points. Louisville was playing a poor defensive game and making terrible shot selections. They had reached the point of the game where they let their double-digit lead slip away with their poor on court decisions. The Cards scored just 12 points in the third quarter and were out rebounded 14-11. Three minutes into the fourth quarter, Louisville had missed 13 of 15 shots and were now facing a 6-point deficit. They looked gassed and disjointed through the entire second half and Stanford had every bit of the momentum. When Prechtel came off the bench for Stanford and scored 16 easy points in the second half, she single handidly secured the 78-63 win for her team sending Louisville home.

After the game, Coach Walz stated that he thought they were really good defensively in the first half. He went on to say they did a decent job rebounding and had Stanford where they wanted them. He gave credit to Prechtel for changing the game for Stanford in the second half, saying she won the game for them. He also said that their goal was a final four and they were half a game short, giving more credit to Prechtel and her second half performance.