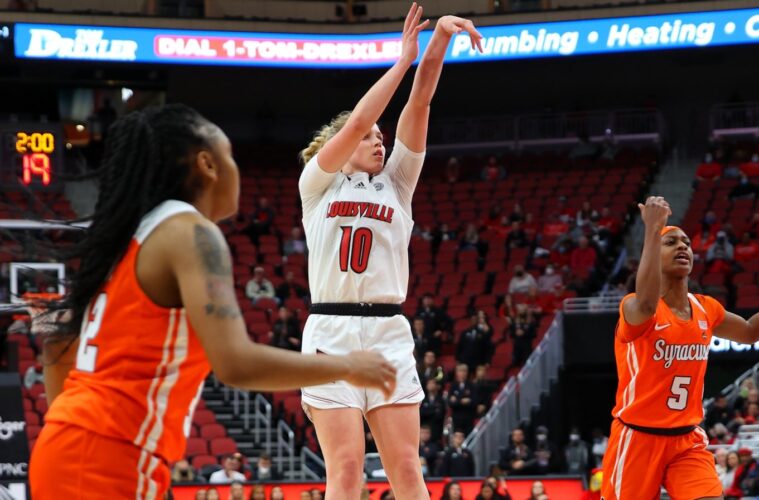 The No. 2 Louisville Cardinals played their first game out of a Covid pause and came away with a 84-71 victory over Syracuse.

Outside of looking winded at times (which we expected) this team came out looking solid. The offense was cooking early, and we saw Hailey Van Lith in double digits early in the second quarter. She would have 13 points by the halftime break. As a team the Cards were shooting 50% in the first half and racked up 24 points in the paint. The defense was performing well with 6 first half steals and forcing 9 Syracuse turnovers. Louisville led by only 5 points at halftime, partially due to 4 made free throws from Syracuse after a foul and a technical called on Emily Engstler. Why? We’re still not sure.

Kianna Smith knocked down a three right out of the gate in the second half and got the offense going but it wouldn’t be enough for the Cards to find a big lead. The Syracuse offense shot 67% in the third quarter and went 4-6 from the three-point line, which was enough to give them the lead at one point and only down by three at the end of the third. During the fourth quarter Louisville found themselves in a 2+ minute scoring drought after missing several layups, but Kianna Smith drained another three-pointer to give the Cards a 3-point lead with just over 5 minutes to play. They were able to extend their lead to 11 with under 2 minutes to play after fourth quarter Hailey Van Lith made her appearance and Emily Engstler made two free throws. The Cards finished things off with a 22-9 run and got their 14th win in a row.

Hailey Van Lith and Kianna Smith led the team in scoring with 20 points each. Emily Engstler padded her stat line with 15 points, 8 rebounds, and 5 assists against her previous school and Olivia Cochran had 13 points and 7 rebounds.

The Cards will travel to Boston College for a noon game this Sunday. That game will air on the ACCN.