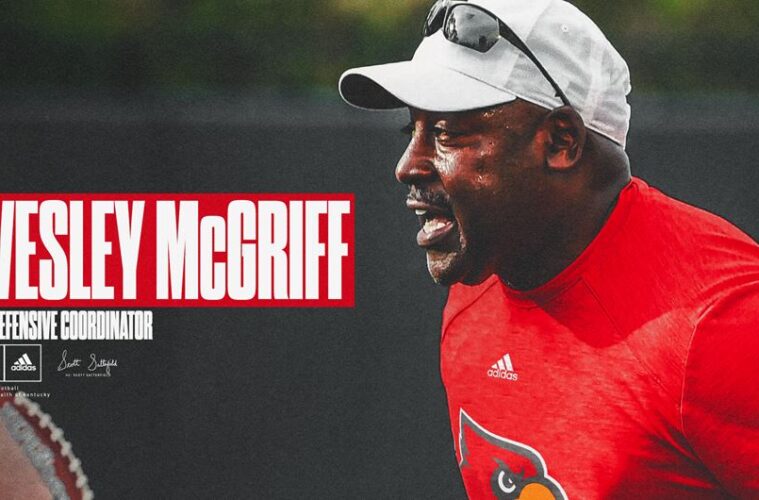 University of Louisville head football coach Scott Satterfield announced Wednesday that Wesley McGriff has been added to his coaching staff as the Cardinals’ co-defensive coordinator.

“Wesley McGriff is an extremely experienced and accomplished coach who has track record of helping young men achieve great success on the field and assisting in building solid defenses,” Satterfield said. “With his experience, he will come to Louisville and make an immediate impact on our defense and our program. His background at the Power 5 level and in the National Football League will help him hit the ground running as he builds great relationships with our players and on the recruiting trail.”

A native of Tifton, Ga., McGriff comes to Louisville after one season at Florida where he served as the secondary coach. The Gators were one of the top teams against the pass, finishing 25th nationally with an average of 203.9 yards through the air.

Before his stint at Florida, McGriff spent two seasons at Auburn in 2019 and 2020.

Auburn’s defense ranked eighth nationally in both red-zone and third-down defense in 2019, allowing only 19.5 points per game against a schedule

that featured six 11-win opponents. Cornerback Noah Igbinoghene was a first-round pick of the Miami Dolphins and Daniel Thomas (Jacksonville) was a

McGriff served as defensive coordinator at Mississippi during the 2016-17 seasons, adding the title of associate head coach during his second season. During the 2016 campaign, McGriff guided a defense that included NFL draft picks in Breeland Speaks (second round) and Marquis Haynes (fourth round); the pair combined for 14.5 sacks, and both earned second team all-SEC honors.

Linebacker DeMarquis Gates had his biggest season, registering 114 tackles, the most by a Rebel in a single season since 2006. In 2017, sophomore linebacker Mohamed Sanogo was fourth in the SEC with 112 tackles and joined Gates in 2017 as the only two Ole Miss defenders with 100+ tackles in the previous 12 seasons.

McGriff spent three seasons in the NFL with the New Orleans Saints, working with the defensive backs. In his first two seasons, McGriff oversaw the development of safeties Rafael Bush, Kenny Vaccaro and Pierre Warren and cornerback Terrence Frederick, while also depending on safety Jairus Byrd and cornerback Keenan Lewis, who led the Saints with 13 passes defensed, while adding two interceptions. Vaccaro led the New Orleans secondary with 113 tackles.

In his first season in New Orleans, the Saints ranked fourth in the NFL in total defense (305.7 ypg.), second in opponent passing yards per game (194.1 ypg.) and fourth in scoring defense (19.0 ppg.), posting an 11-5 record and advancing to the divisional round of the playoffs. McGriff spent 2012 as co-defensive coordinator/cornerbacks at Ole Miss, which finished second in the SEC and in the top 15 in the NCAA in tackles for a loss (7.7) and sacks per game (2.8). Linebacker Denzel Nkemdiche was named to the FWAA All-America and SEC all-freshman teams, defensive tackle Isaac Gross earned conference all-freshman honors and was named to the CollegeFootballNews.com Freshman All-America team and safety Trae Elston was named to the ESPN SEC all-freshman team.

McGriff spent the 2011 season as defensive backs coach/recruiting coordinator at Vanderbilt, where he helped the Commodores to only their fifth all-time bowl appearance. His secondary produced 12 interceptions (three returned for TD). McGriff helped Green Bay Packer Casey Hayward become the first Vanderbilt All-American in four years, posting seven interceptions, the third-highest season total ever by a Commodore. McGriff spent four seasons as the secondary coach at Miami (Fla.). In 2010, the Hurricanes ranked second in the nation in pass defense, allowing just 164.3 yards per game; the Miami defense ranked 16th nationally and 21st in scoring defense. In 2009, he tutored All-America defensive back Brandon Harris, seven-year NFL veteran safety Kenny Phillips (2007 All-American and first round NFL draft pick) and Green Bay defensive back Sam Shields. McGriff served as the defensive backs coach/recruiting coordinator at Baylor from 2003-06 and enjoyed his first SEC stint at Kentucky from 2001-02.

He spent 2000 as the secondary coach at Eastern Kentucky where he mentored all-Ohio Valley Conference DB Yeremiah Bell, who was drafted by the Miami Dolphins in the sixth round in 2003. From 1995-99, McGriff served in multiple roles including assistant head coach, defensive coordinator and secondary coach at Kentucky State and was named the AFCA’s NCAA Division II National Assistant Coach of the Year.

He began his coaching career at his alma mater, Savannah State, from 1990-94. Starting as a graduate assistant, McGriff tutored running backs before coaching the secondary in 1991 and later serving as defensive coordinator and interim head coach.