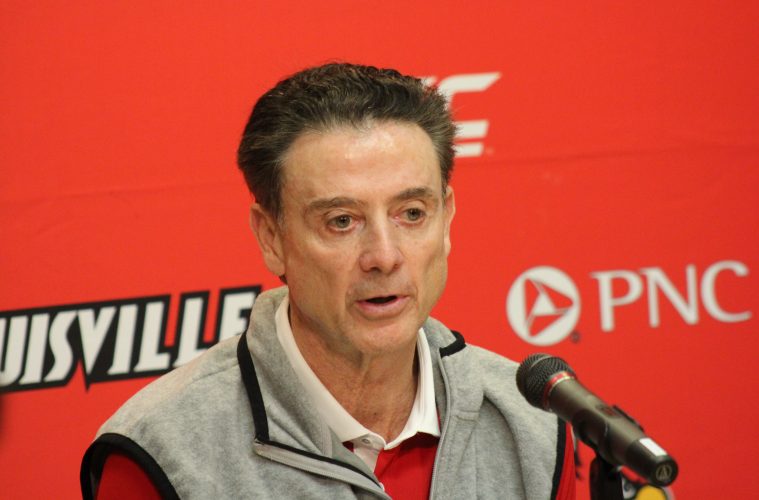 Rick Pitino is back to blogging with a LENGTHY post on the NCAA Tournament & how he hopes to improve each player coming back to the roster for 2016-17. Here it is in its entirety:

I wasn’t going to watch any of March Madness. After tuning in to parts of the opening round, I came completely immersed in every game, with the exception of Indiana vs Kentucky. I attended the Pacers/Thunder game at the same time. It has been more than madness this year. The unpredictability of it all has made every prognosticator look like he’s never watched a basketball game.

One game after another brought about bizarre endings. Many sit there and play armchair quarterbacks, like a friend of mine did in the Wisconsin game. The coach called a timeout with two seconds remaining. My friend said he has the open floor, why would he set up a play with just two seconds? My response was simple: because he knows his team from living with them each day. Obviously, it’s something he practiced. Well, it was a difficult shot but a thing of beauty for Wisconsin.

Then there was the breakdown of Northern Iowa. They don’t call that the coffin corner for nothing. When you pass it there you must release it to the inbounder immediately. It was a great trap by the defense. But remember, Northern Iowa had won its game before on a three-quarter court, Hail Mary shot. Luck runs both for and against you.

As I study the NBA now, I would give the Warriors or San Antonio a strong chance to be NBA Champs. Certainly the Cavs, Thunder and Clippers could be thrown into that conversation. So how is that relevant for the NCAA choices now that we are down to the Sweet 16? Well, you will now hear that it will come down to North Carolina, Virginia or the favorite Kansas. All logical choices, but what about the winner of the Villanova/Miami game? I haven’t seen a better half played than the one Villanova put together in their last game. Miami is deep, talented and can shoot. No one seems to be playing better than Gonzaga — what about their hot stretch?   Someone has to put together four great games and withstand lucky buzzer beaters.

We are rooting for the ACC. Roy has a deep, talented team and he certainly has them peaking. If Mike gets to another Final Four, he will have them ready. Mike Brey will keep it close with every game played, so they have a shot. The two Jims, Larranaga and Boeheim, have enough talent to surprise any of these teams. That leaves the last ACC team, Virginia. Jay Wright and Tony Bennett are two of the classiest coaches in our game. It could be their turn. Maryland, Oklahoma, Oregon, Texas A&M, Iowa State, Indiana and Wisconsin all have a shot. They are four games away.

So you probably expect me to give my pick for this year’s champions. Pick a number between 1 and 16 with all the names of the teams left and you have a chance of being right. It’s who can handle the pressure as it mounts the last four games. Depth, defense and luck will play an important role in who is crowned champion. It’s a great group of coaches left and one will have their team’s shining moment. Buckle up. It’s unpredictable but so exciting.

We have been through two days of individuals. Points of emphasis with the guards are simple: defend one-on-one better and become better one-on-one offensive players. You don’t have to be Russ Smith, but it’s a must that they learn to create their own shot off of movement.

Here’s a quick synopsis on what we will focus on:

Deng Adel – long range wing, has all the tools to be a great one. I’m positive he will reach his potential because of his work ethic. Focus: improving his ball handling and passing.

Donovan Mitchell – weighed 210 lbs. this year, way too much for a 6-2 guard. He will get down to 195 and it will make him quicker on defense. Not sure he can jump any higher as is he already a freak athlete. Focus: defense, ball handling, and consistency in his jump shot.

Ray Spalding – like most freshman, he had the tendency to take his eyes off the ball. This led to dropped balls and turnovers. Focus: strength, ball handling and jump shot.

Jaylen Johnson – had an consistent sophomore season. Good at many things, but must become great at two aspects of his game: rebounding and stamina. Focus: getting body fat between 6-7%, improve his jump shot and quickness.

Chinanu Onuaku – outstanding sophomore season. Stamina must get better so he doesn’t create foolish fouls. Focus: The NBA is looking for high percent rebounders per minutes played, as well as shot blockers and defensive players — all things he can improve on. Ask Tristan Thompson and Kenneth Faried if they are happy with their paychecks. Focus: becoming great in those areas.

Mangok Mathiang – the glue to reaching our potential next year. Physically tough, excellent rebounder and defender. Our leader who’s been there and knows what to do. Focus: ball handling, passing and mid-range jumper.

David Levitch – I can count on him in any situation. Valuable asset to our team. Will be counted on next season. Focus: consistent jumper, one-on-one body-to-body moves, defense.

Quentin Snider– had a solid sophomore season. Came a long way in many areas. Really excited with his improvement. Focus: defense, defense and defense. All other areas will improve due to his great work ethic.

Matz Stockman – improved with each week of practice. Focus: must stop beating himself up when he makes a mistake, moves going off his right shoulder, passing and mid-range jumper.

Jay Henderson – valuable asset. Good size and desire to improve. Focus: defense, ball handling and quick release on his jump shot. Excited to have him.

Ryan McMahon – Clever and extremely gifted offensive player with tremendous range on his jump shot. Focus: Because he has not grown, but has a good wingspan, will be forced to play the point. Needs to cut down on turnovers.

How about next year’s schedule:

– Battle for Atlantis – we need you there with us. Travel info at: http://www.gocardstravel.com/battle-4-atlantis/

– Indiana at Bankers Life Fieldhouse in Indianapolis – half IU, half Louisville

With all that we have endured, let’s have some fun!