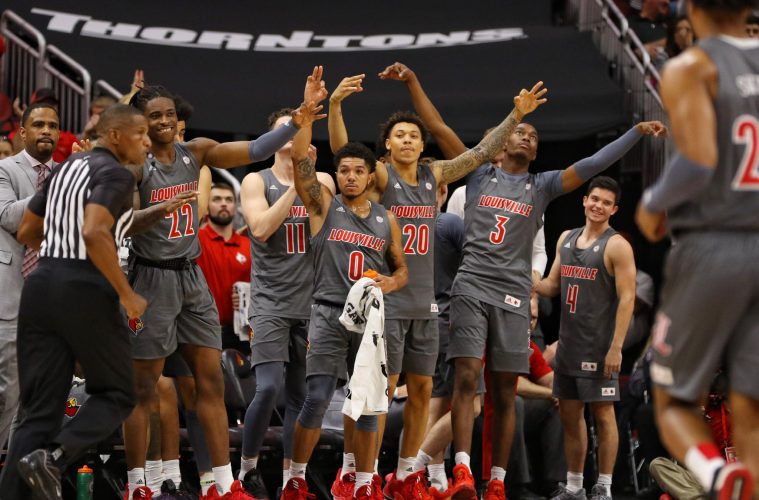 “They’re #1 in the country for a reason: They’re talented, they’re old, they’re experienced.”

Those were the words of Pitt head coach Jeff Capel III after the Louisville Cardinals handed the Panthers a resounding 64-46 loss in front of 17,000 at the KFC Yum! Center on Friday night. The Cardinals improve to 2-0 in ACC play and 9-0 overall with an assured continuance at the top of college basketball.

In getting to the win the Cardinals demonstrated that the old maxim about switching horses midstream doesn’t necessary have to hold true in all cases. Louisville started off with a hot hand from outside the arc as eight different Cardinals found the net from three-point range. Per Chris Mack it wasn’t a chosen strategy but rather the result of good ball movement.

“We were running offense. Those were open shots.”

Indeed the rain of threes was generally by way of inside looks to Enoch or Williams before a kickout but both big men made sure to get in on the action as well with threes of their own. In a testament to Louisville’s depth, seven of the first eight threes not from Jordan Nwora but rather seven of his teammates. Nwora didn’t get his first basket until nine minutes remained in the first half but that didn’t stop the offensive onslaught.

But just as with Michigan it was the Cardinals’ defensive efforts that proved to be the most technically impressive. Louisville has now held two straight opponents to under 50 points, and did so despite allowing several Pitt runs towards the end of the first half and at the beginning of the second.

Eric Hamilton battled throughout the game with Malik and Steven but it never looked like a fight he could win. Malik would say,

“I think we did a good job of responding to the physicality that they had. I don’t think they were the tougher team tonight.”

Hamilton was able to fight his way to 10 points but had just three rebounds. The Panthers’ guard play was tenacious and equally physical with Xavier Johnson leading the way with 15 points and 2 assists. In a testament to the physicality, the Panthers would see both starting guards (Johnson and Toney) foul out by the end. The Cardinals, however, committed just 12 team fouls to the Panthers’ 17 and allowed Pitt to shoot from the charity stripe only six times. Both Trey McGowens and Ryan Murphy were averaging double digits for the Panthers but managed just nine combined points on the night.

While the Cardinals defense remained generally consistent throughout the night it was the Cardinals offense that turned things upside down coming out of the locker room after halftime. What had been an outside game went inside with Malik Williams messin’ around and getting a double-double on 13 points and 11 rebounds. Louisville was 9 of 17 from three in the first half but shot just 9 three-pointers in the second half an only made two. Eight first half points in the paint doubled in the second half to 16 as Williams set the tone down low.

Physicality continued throughout, with the most notable instance being a particularly scary moment for Jordan Nwora. As Nwora moved around the defender on an in-bounds play his arm was held and he quickly fell to the floor grabbing his left shoulder. Chris Mack was asked about his immediate thought when he saw Jordan hit the deck.

“Sheer panic. I saw his expression…he said, ‘It almost came out.’ I said did it come out? He said, ‘No.” I said, well, almost doesn’t count.”

The Louisville training staff worked their magic and Nwora quickly returned to the court on his way to 19 points, six rebounds, and two assists to lead all scorers.

Those 19 points were a key part of Louisville’s second half explosion to bury any chance of a Panthers comeback. Pitt’s halftime adjustments set the stage for an 8-0 run out of the locker room as the Cards went cold. Showing poise, leaders like McMahon, Nwora, and Williams huddled and kept things calm before the Cardinals once again found the range.

The final nine minutes of the game was nearly all Louisville as the Cards embarked on a 17-4 run to close things out. By the time the one minute mark rolled around Chris Mack granted mercy and sent in the freshman squad to finish things out.

The Cardinals are now 9-0 and 2-0 in ACC play which is an anomaly for early December. But ACC Network schedules being what they are the Cards find themselves well positioned as conference play gets going. Louisville now travels to Madison Square Garden for a showdown with Texas Tech before returning to the KFC Yum! Center next Saturday to face EKU.