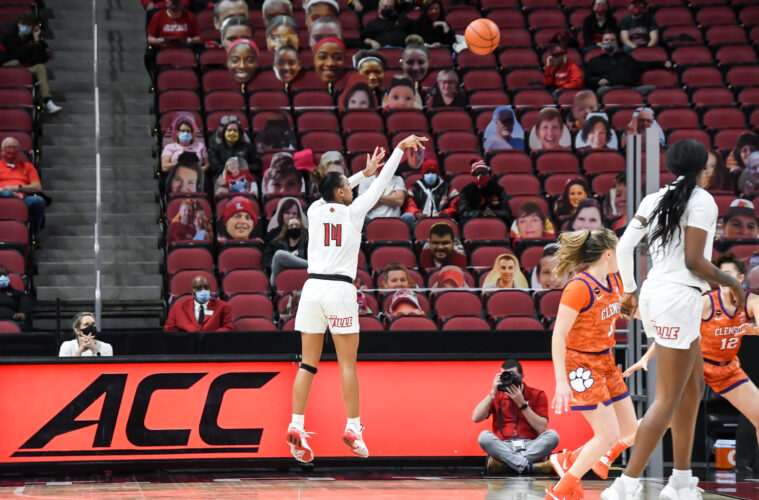 As with everything in the COVID-19 world, today was another weird day. It started when a noon tip-off was pushed back to 2p.m. at the last minute, without explanation. Things continued to be weird when only 7 players warmed up for Louisville. Not long into the first quarter, we saw players trickle in from the locker room one or two at a time. We found out later, that this was all due to last minute COVID-19 testing for the Cards.  The good news is that Louisville still got to play a basketball game today, and with the way this season has gone, that is enough to be excited about.

The Cards were shooting 45% from the field in the first half with Kianna Smith leading the team in scoring at 9 points. Dana Evans picked up two fouls in the first quarter, which meant we did not see her in the second quarter. That did not stop the Louisville offense from scoring in the paint and tallying 12 points off Clemson turnovers. Kianna Smith made her presence known on both ends of the court, playing all 20 minutes of the first half and racking up 9 points, 3 assists, and 2 blocks. As a team, Louisville had 16 first half rebounds and 12 of those would come on the defensive end with 8 of the 12 coming from Hailey Van Lith and Liz Dixon, grabbing 4 each. Liz Dixon also led boards on the offensive end having 2 of the team’s 4 total in the first half.

Going into the second half, we saw the return of Dana Evans and the continuance of a block party. The defense looked great in the second half with 19 defensive rebounds, 5 blocks, and forcing 7 turnovers. This effort was led by Olivia Cochran who tallied 5 of the team’s defensive boards and 2 of 5 team blocks. On the offensive end, Elizabeth Balogun recorded her season high with 14 points. She also had 6 rebounds and 3 assists. The Cards had 26 points in the paint and scored 18 points off turnovers, led by Kianna Smith with 17 points. Kianna was one of four players who had double digit scoring. In their 70-45 victory, Louisville shot 45.8% from the field, 36.4% from the three, and 88.9% from the free throw line.

In his post-game press conference, Coach Walz said that he feels they handled the situation prior the game well. He stated that they had a young lady today who was possibly showing COVID-19 symptoms but tested negative. She was not at the game and all the players received negative tests right before the game started. He also said that the players who came out late were able to warm up in the back gym before coming to the bench. He was not aware that they would have 11 players available until they came out to the floor. Coach Walz said he was happy for Elizabeth Balogun and her game today, adding that she is unbelievable defensively. When asked about how she changes the dimension of her play, Coach Walz says that Elizabeth has great instincts, knowing when and how to help. The team will take tomorrow off to get some rest, which Coach Walz says is a well-deserved break.

Kianna Smith explained that this season they have learned to be flexible, so the situation before today’s game did not have much impact on them because they knew they would be playing a game regardless. She knew the tests would come back at some point during the game so they weren’t surprised when the rest of the team showed up on the bench. When asked about her game play today, she credited her teammates and coaches for giving her a lot of confidence.

Elizabeth Balogun said that this day was long. They got to the Yum! Center around 8a.m. for their normal routine and that’s when they found out that they would all be getting tested. She said it was weird to be warming up in the back court without the rest of the team. Elizabeth said that Kianna Smith’s defensive play and knowledge fires her up, also stating that Kianna is one of the team’s best defensive players.

Louisville is now 10-0 overall and 3-0 in the ACC. The Cards are currently scheduled to host Boston College Thursday, January 14th at 8p.m. That game will be on the ACC Network and can also be heard on 790-AM WKRD.