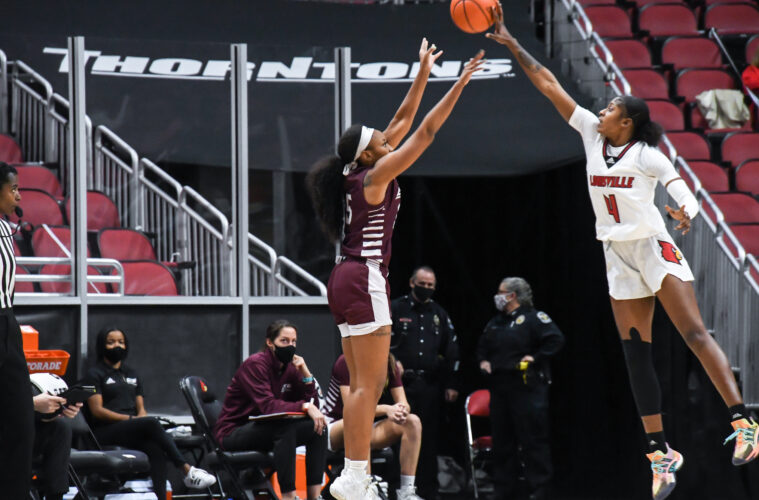 The Cards had a visit from in state school, Eastern Kentucky University for their home opener this afternoon.

Louisville came out hot in the second period when Elizabeth Balogun scored three and Dana Evans drew a foul on a jumper. Hailey Van Lith would add another three to her stat line for the day as well. While EKU tried to hang around in the first, we saw the Cards pull away in the second and go into halftime with a 17 point lead and a 41% scoring percentage. Balogun and Evans led the team in the first half with 10 points each.

Alhana Smith started off the second half with a beautiful three point shot and the Cards held onto that momentum by keeping their offense turned up and allowing their defense to pressure the Colonels, forcing multiple turnovers. Louisville scored 3 of their 25 third period points off of Colonel turnovers and also racked up 7 second chance points. Hailey Van Lith continues to prove why she’s one of the best in the game with her aggressiveness on the court. Need an example? See this block below….

Louisville went into the fourth period up 68-39 over the Colonels with 4 double digit scorers and didn’t think about slowing down. The Cards made four three-pointers in a row, two of those coming from veteran Dana Evans. Hailey Van Lith would add 8 points to her stat line in the fourth period and Ahlana Smith added 5.

Considering there are no more last minute schedule changes, Louisville will face UT Martin at the KFC Yum! Center on Sunday, December 6th at 2p.m.. Until then, I’ll leave you with these tweets…