Louisville Takes Down Mustangs, A Game of Highs & Lows

Chris Jones learned of his brother ‘s death (Demetrius Ray) following the Cards road loss to Memphis on Saturday.  Jones, a Memphis native came to his hometown excited and left with a heavy heart. Ray, his step-father’s son, was actually shot & killed during the Louisville v. Memphis game. Jones said after the SMU game, “I just thank Louisville fans for keeping my head up….I’ve been in my room crying a lot.”

Jones’ situation was an unknown prior to Wednesday’s match-up with SMU, and in post-game Chris told reporters, “I’m going to dedicate the rest of life & career to him (Ray).”

It was an inauspicious start and the Cards trailed by 14-points with 6:16 remaining in the 1st half.  Chris Jones actually kept the Cards close to that point in the game scoring 6 of Louisville’s 12 points, but the Cards were struggling.  There were turnovers, UofL was shooting an abysmally low percentage from the field and a rabid environment looked like it was getting the best of the Cards.  Rick Pitino said of the SMU crowd, “They obviously serve alcohol here, and I don’t think it is a religious school.”

The SMU fans were there in force.  In costume AND LOUD.  The 43rd President of the United States, George W. Bush was in attendance as was Dallas Cowboys owner Jerry Jones along with his head coach Jason Garrett, his quarterback Tony Romo, and his tight end Jason Witten.  The Louisville v. SMU ticket was the highest sought after basketball ticket of the season in the state of Texas with everyone hoping to see the Mustangs pull off an undefeated season at home.

At the 6:16 mark in the 1st half things began to change.  Montrezl steal, Russ Smith steal, Hancock 3, Chris Jones steal, Luke 3, SVT steal, Chris Jones 3…….all took place during a period in which SMU did not score.  BOOOOM!

Are the Boom boys back now that it is March?

Louisville looked at a 14-point deficit with 6 minutes to go in the 1st half and went to halftime with a 2 point lead.  IMPRESSIVE.  What’s more, they did it on the road in one of the more crazy environments Louisville will ever see.  This is SMU’s best basketball team since 1988 and the Mustangs’ campus is hungry for an athletics winner.

The 2nd half was “The Russ Smith Show”.  The Louisville Senior played with an upset stomach and WENT OFF in the 2nd half.  Russ Smith hit 6 of 6 from behind the 3-point line for the Cards, the first to do so in 15 years.   Russ had to excuse himself a handful of times in the 2nd half to throw up in a nearby trash can, only to return to the game.  It was a gutsy performance by the Cards, and Russ……..literally.  Smith finished with 26 points, 6 rebs, 5 assists and 2 steals on an upset stomach.

Montrezl Harrell had a reverse slam and SMU had no answer at all for the Louisville Power Forward.  Harrell had several demoralizing & timely dunks, perhaps none more eye-opening than a reverse alley-oop that really took a lot out of the Mustang crowd.  But the jam that everyone was talking about came at the 0:02 mark when Montrezl Harrell slammed home an emphatic exclamation point on the game.  With 0:12 seconds Sterling Brown stole the ball from Luke Hancock (who was trying to dribble out the clock), Hancock rebounded Brown’s miss, threw the outlet to Harrell who put the finishing touch on the evening.

The Cards will now travel home for Senior Night in a RED OUT vs. UCONN.  Fans will have an opportunity to say goodbye to Russ Smith, Luke Hancock, Tim Henderson, and Stephan Van Treese.  Fans might also want to collectively give Chris Jones their love, and potentially get their last look at the ‘Dunk King” Montrezl Harrell who is moving up Draft Boards daily. 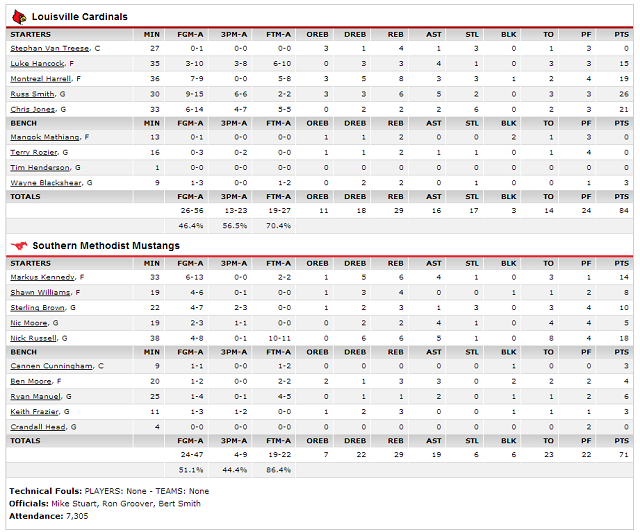