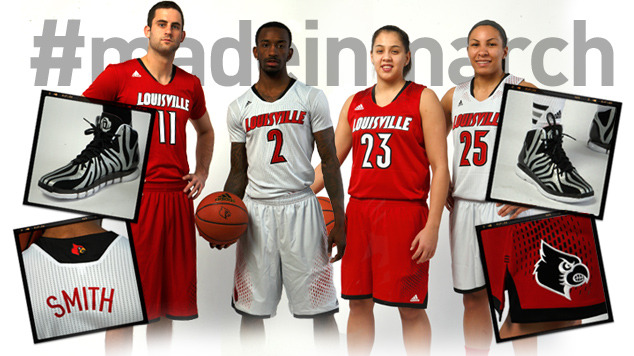 adidas, Louisville Unveil New “Made in March” Uniforms for Postseason

LOUISVILLE, Ky. – adidas and the University of Louisville men’s and women’s basketball programs are unveiling new uniforms on Thursday for postseason play. The Made in March Uniform System was created to provide the Cardinals with adidas’ most advanced uniform system and basketball apparel technology.

The Made in March uniforms feature a functional perforated print pattern along the leg of the stretch woven shorts to enhance breathability and ventilation, keeping players cool.

adidas’ quick-drying jersey technology, found in current NBA uniforms along with ClimaCool zones on the chest, back and side, move heat and moisture away from the body to keep the jersey light and dry as players sweat. The jersey sleeves include armhole insets with 360-degree stretch fabric that facilitate free range of motion for the arms and shoulders during shooting and dribbling.

Made in March uniforms feature the “The Ville” on the inside collar of each jersey as homage to the team’s home and loyal fan base.

The Made in March Uniform System debuts on court, beginning with conference tournament play, and fans can grab their Made in March gear at adidas.com<http://www.adidas.com> and campus bookstores.

Louisville’s women’s basketball team, the No. 2 seed in The American Championship, has a first-round bye and begins competition in the quarterfinals on Saturday, March 8, against the Memphis-Houston winner at 6 p.m. ET at the Mohegan Sun Arena in Uncasville, Conn.

The men’s team is finishing regular-season competition with a home game on Saturday against No. 19 Connecticut at 2 p.m. in the KFC Yum! Center. The game has been designated as ‘Wear Red for the Seniors’ to honor seniors Luke Hancock, Tim Henderson, Russ Smith, and Stephan Van Treese. The men’s tournament runs from March 12-15 at the FedEx Forum in Memphis, Tenn.