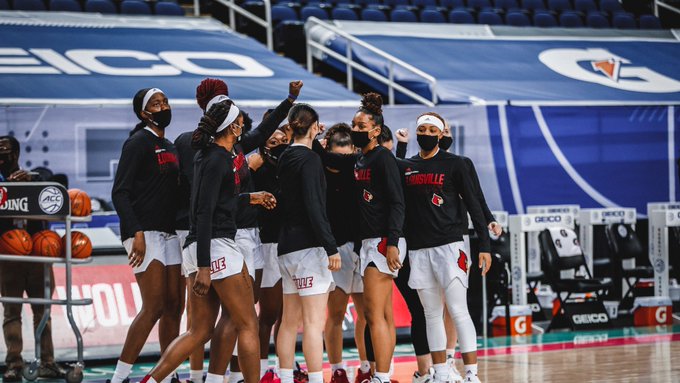 Louisville lost a heartbreaker in Greensboro this afternoon after battling for the ACC Tournament Championship.

The first quarter was a little too sloppy for my liking. Louisville would end the quarter holding onto a slim one-point lead. The good news is that the Cards did not give up an offensive rebound through the first ten minutes of play. The bad news is that Hailey Van Lith and Dana Evans were a combined 1-5 through those same ten minutes. Kianna Smith however, tallied herself 7 points in the first quarter and Balogun made some waves when she sank a three-pointer from the corner. Liz Dixon drew two early fouls putting her on the bench for the remainder of the first half. Louisville was defending well as a team, with 13 of their 14 first half rebounds coming on the Wolfpack end of the court. Hailey Van Lith would finally get her first points in the second quarter with a quick jumper followed by a three-pointer. She also added 3 assists and 2 rebounds to her stat line in the first half. North Carolina State was however, making stops when needed and forced 7 Louisville turnovers through the first twenty minutes. At the half Louisville was trailing by one point but shooting 40.7% from the field. There had already been 7 lead changes. They would need to clean up a few things to have a successful second half and secure the ACC hardware.

Louisville came out in the second half looking like they had not cleaned much up. Dana Evans struggled settling in and instead of letting her game come to her, she was trying too hard to force things she did not need to force. This resulted in her going just 3-8 from the field through the third quarter. She was able to turn things on toward the end of the quarter and we started to see the Dana we all know and love. The Cards got two points early in the third quarter from Olivia Cochran at the free throw line but did not see another bucket until the 6:30 mark when Kianna Smith hit a jumper for two points. The Cards trailed by as much as 7 during the third quarter before responding with an 8-2 run to cut the NC State lead to just 1. The Cards were able to get the lead back after scoring in transition off Wolfpack mistakes and going on a 12-4 run to end the quarter. The fourth quarter brought the energy we like to see from this team. Dana Evans was absolutely fired up and Olivia Cochran was owning the paint, as she should. Evans finally found herself in double-digit scoring and the team was holding onto a one-point lead with 3:23 left to play. They were shooting 44.4% as a whole and finally making moves on the inside. They managed to clean up their turnover issue and force 5 NC State turnovers through the second half. Things seemed to be shaping up well for Louisville and things were finally clicking, until they weren’t. NC State took a two-point lead with 2 seconds left and the only thing crossing my mind was the way we ended things against Florida State last year. A play would be drawn up for Dana Evans with less than two seconds to go and in a heartbreaking end, she would miss a three-point jumper giving the Wolfpack a 58-56 victory.

In his postgame interview, Coach Walz said, “It sucked. Let’s just be blunt about it.” He went on to talk about how he thought the team had a great defensive effort. He also stated that the bench play has been good and he’s seen growth from a lot of those players this weekend. He says they need to work on foul trouble.

The Cards will find out where they land for the NCAA tournament on Monday, March 15th at 7p.m.