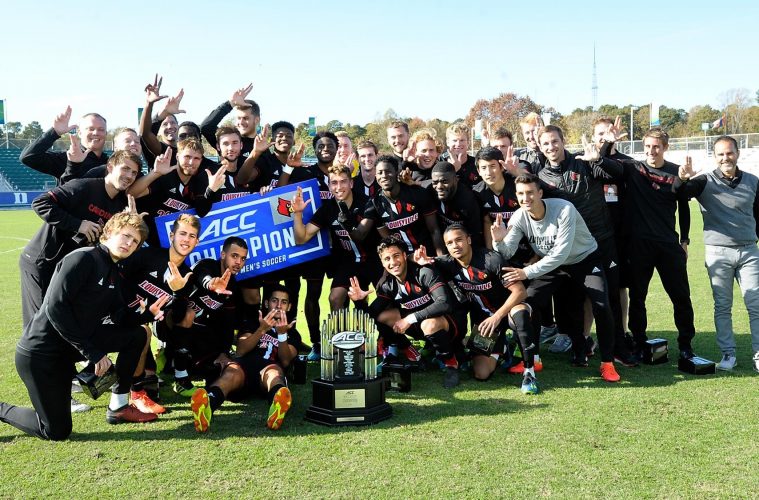 Cherif Dieye scored the only goal of the match and goalkeeper Jake Gelnovatch anchored a strong defensive performance as the No. 10 University of Louisville men’s soccer team clinched its first ACC Championship title with Sunday afternoon’s 1-0 victory against No. 4 North Carolina at Sahlen’s Stadium at WakeMed Soccer Park.

Making their second appearance in five years in the title match of the ACC Championship, the Cardinals (11-4-3) earned their second conference tournament championship in school history adding the latest triumph to the 2010 Big East championship. Sunday’s victory culminated an impressive run to the title for Louisville, which allowed just one goal in wins over No. 18 Notre Dame, No. 1 Wake Forest and No. 4 North Carolina (14-3-1) in a span of eight days.

“I was so happy to see the zeros show up on the clock,” said Louisville head coach Ken Lolla. “The last time we were here we probably should have won it but didn’t handle the last seconds of it well. This has grown into a mature team and they did what they needed to close it out.”

The fourth-seeded Cardinals struck for Sunday’s clinching goal in the 29th minute when Dieye scored inside the far left post from 12 yards out for his fifth goal of the season. The decisive sequence started with a long pass into the box to Izaiah Jennings, who delivered a short pass to his right to Tate Schmitt. The senior moved the ball to Dieye, who worked a right-footed shot around a defender and past the goalkeeper for his 12th career goal. Schmitt, named as the Tournament MVP, registered his team-leading eighth assist of the season and the 17th in his four-year career.

“With a one goal lead early in the second half, we wanted to play the same the same way we played in the first half and looked to get the second goal,” Lolla said. “As the half went on, we put the onus on them and forced them to break us down. I thought our guys did a pretty good job once we were back behind it or closing spaces and make it difficult for them to create opportunities.”

Following the goal, Louisville limited the chances for the second-seeded Tar Heels allowing only seven shots over the final 60 minutes. The victors withstood each of the threats as Gelnovatch turned away all four shots he faced to clinch his sixth shutout of the season and the eighth overall for the Cardinals. Overall, UNC finished with a 9-6 edge in shots and a 4-3 margin in corner kicks.

“To win championships you have to be really good defensively,” added Lolla. “Looking at Notre Dame, Wake Forest and UNC, to give up only one goal in those three (ACC Championship) games, we are growing to be a good defensive team. We are a tough team to break down, and I think that’s important for any tournament you are in.”

Four Cardinals were named to the ACC Men’s Soccer Championship Team as Schmitt was joined by Dieye, Gelnovatch and Lamine Conte. Schmitt delivered a goal and two assists in the three ACC Championship matches for the Cardinals en route to earning the MVP honor. The Phoenix, Arizona native ranks fourth in school history with 69 career points and sixth with his 26 career goals.

Up next, the Cardinals will turn their attention to the NCAA Championship as the field of 48 teams will be announced Monday at 1 p.m., ET on NCAA.com.