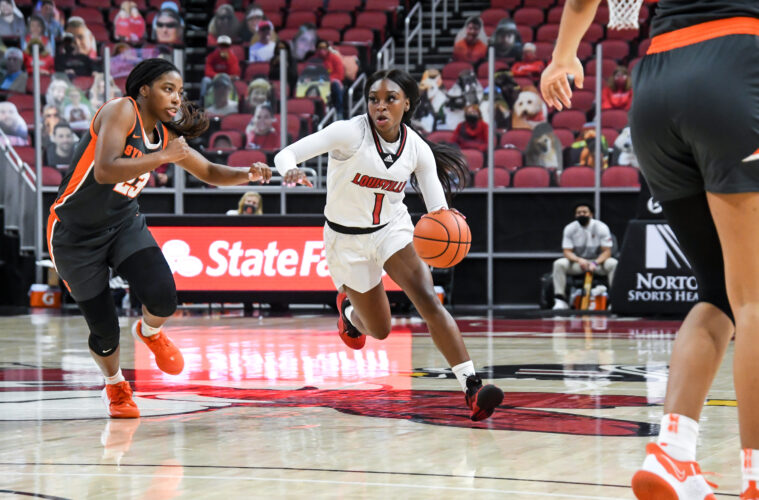 Louisville faced a ranked Syracuse this evening and it was the first time this year the team faced true adversity. Syracuse had a more than noticeable size advantage over the Cards, who struggled early on both ends of the court. But it was the aggression of the freshmen and the leadership of Dana Evans that would help this team get the 67-54 victory.

The Cards had a challenge early on when they went through the first two minutes of play tied at 0 with the Orange. It did not take long for Louisville to go on an 10-0 run with Hailey Van Lith hitting two from deep. Olivia Cochran would have 6 points of her own by the first timeout, helping Louisville take the lead 14-6. Syracuse tried going back and forth through the first quarter using their size to their advantage and going on an 8-0 run to tie the game out of the time out. Kianna Smith came off the bench to give the offense a small spark, while Dana Evans went 0-4 I the first quarter. The Cardinal defense struggled stopping Syracuse in the paint, 24 of their first half points were in the paint. Louisville struggled with turnovers in the first half, recording 7. Dana Evans would finally see her first shot fall with about three minutes left to play in the half, cutting the Syracuse lead to two. Louisville would take the lead again after a two-point goal from Elizabeth Balogun. Syracuse responded with two points of their own, but the Cards answered with a three pointer from Hailey Van Lith and another two from Dana Evans. Right before the halftime buzzer, Dana Evans hit her first three of the night to give the Cards a 32-29 lead.

The Louisville offense found its bearings on an 8-0 run led by Van Lith, Cochran, and Evans in the third quarter and would hold the lead through the end of the period. Dana Evans recorded 7 more points and Kianna Smith tallied 5 after a three pointer with one minute left in the third quarter. With 10 minutes left to play, Louisville was holding onto an 8-point lead and ready for the final battle. The Cards were fully locked in during the fourth quarter, having a 15-point lead at one point. The ball movement for Louisville was some of their best all season. Not only can Dana Evans score, but she can make big plays in heavy traffic, which really gets this team going. With just under five minutes to play, Dana had recorded 7 assists, including one in the fourth quarter on a pass to Hailey Van Lith for her sixth 3 pointer of the game.

Dana Evans led the team in scoring tonight with 21 points while also having 4 rebounds and 7 assists. Hailey Van Lith was not too far behind with 18 points and 8 rebounds, while Olivia Cochran tallied 11 points 3 rebounds, 1 block, and 2 steals.

Louisville travels to Wake Forest this Sunday, January 24th for a 2:00p.m. tip off. The game will be broadcast on ACCN and can be heard on 790-AM WKRD.