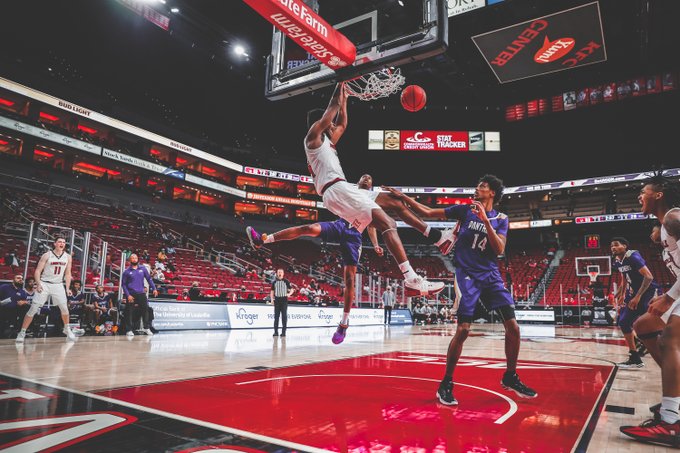 Louisville was able to enjoy a hot shooting night against the Prairie View A&M Panthers finishing the game hitting 61% of its tries from the floor. UofL started slow trying to figure out the Panther’s 2-3 zone, but did find its rhythm mid-way through the 1st half.

Louisville had to further shorten its rotation tonight as Samuell Williamson was added to the unavailable list following an injury suffered during Friday’s win vs. Seton Hall. Still the Cards moved to 3-0 on the season without Charles Minlend, Josh Nickelberry, Malik Williams and now Samuell Williamson for a time.

The real story of the Cards’ game against Prairie View was the diversity of contributions from all of Louisville’s participants. Jae’Lyn Withers lead the way 20 points (8-10 FGs), 9 rebounds, but it was also 19 points from David Johnson with 6 assist, Carlik Jones with 15 points and 4 assists, Dre Davis with 12 & 6, Quinn Slazinski with 7, 6 & 2 and even though he fouled out JJ Traynor with 5 points, 3 rebounds.

It’s clear after 3 games that this Louisville Basketball team, even without all of its parts is going to be a contact drawing team that goes to the foul line and hopefully can continue to finish through contact. Chris Mack’s teams have always rebounded well and despite injuries that’s continuing.

Another early thought about the 2020-2021 team is that the Cards have a high probability of being a ‘fun’ team. Far from perfect, but a team capable of a lot with some really young components and we’ll probably see their youth get exposed a few times during the season as well.

Carlik Jones & Dre Davis are clear huge additions to this roster and JJ Traynor has already hit a game winner in the Cards’ biggest game thus far. Jae’Lyn Withers was HUGE tonight and David Johnson looks like a guy who is serious about getting some ALL-ACC recognition. We’ll see how it all plays out, but for now the Cards are 3-0 and showing some nice pieces to an early season with some really important parts trying to get back to the court.

On to Western Kentucky Tuesday.