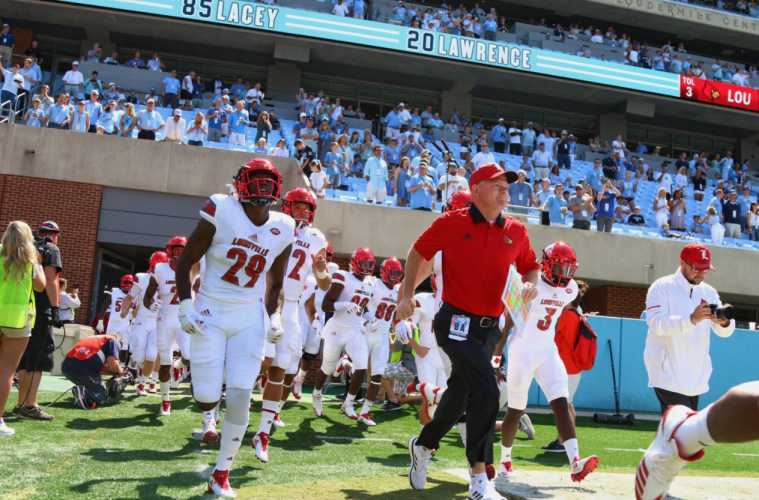 The ACC released the entire league’s football schedule on Wednesday afternoon. Louisville’s schedule is among them and we’ve got DATES to schedule your Fall around.

A neutral-site contest versus the defending national champions and a pair home games against in-state rivals Western Kentucky and Kentucky highlight the 2018 University of Louisville football schedule, the Atlantic Coast Conference announced on Wednesday.

Head coach Bobby Petrino’s ninth Louisville squad opens the 2018 campaign on Sept. 1 versus Alabama at Camping World Stadium in Orlando, Fla. The Crimson Tide defeated Georgia 26-23 in the College Football Playoff National Championship to win the national title for the second time in three seasons. It’s the first meeting between the two programs since the Cardinals won 34-7 in the 1991 Fiesta Bowl.

In-state foes Western Kentucky and Kentucky visit newly renovated Papa John’s Cardinal Stadium on Sept. 15 and Nov. 24, respectively. It will be the first visit by WKU to Louisville since facing the Cardinals in 1998.

The Cardinals are in the process of a $63-million project that will enclose the north end zone, which is set for the opening game of the 2018 campaign against Indiana State. It consists of 10,000 new seats, with 1,000 club seats, 70 premium boxes, and 12 exclusive field level suites that will increase the capacity to approximately 65,000.

Louisville opens its fifth season in the ACC on the road on Sept. 22 at Virginia and continues league play with consecutive home games: Sept. 29 versus Florida State and a Friday game versus Georgia Tech on Oct. 5 – the first meeting between the schools.

Following the two-game homestand, the Cardinals hit the road for three of the next four contests, beginning with a trip to Boston College on Oct. 13. The Cardinals are looking for their third-straight win at Alumni Stadium.

After the first open week of the season, the Cardinals host Wake Forest on Oct. 27 before traveling to Clemson Nov. 3 to face the 2016 national champions in Death Valley. The road stand continues with a trip to Syracuse on Nov. 9 for a nationally televised Friday night contest. The Cardinals have beaten the Orange on three-consecutive occasions after a 56-10 win last season.

The Cardinals close ACC play against NC State on Nov. 17 and end the year at home against Kentucky, with the series evened up at 15-15 after a 44-17 win in Lexington.

In all, Louisville faces nine teams that played in postseason bowls last season, including three schools that have accounted for six of the last seven national titles (Alabama, Clemson and Florida State).

Game times and television designations for Louisville’s 2018 games will be announced at a later date.

Fans interested in signing up for the for the season ticket waiting list should visit www.GoCards.com/FBtickets for additional information.