The team was selected by the media attending the 2014 ACC Football Kickoff held this past Sunday and Monday at Greensboro’s Grandover Resort.

Winston, who became the youngest player and only the second freshman to win the Heisman Trophy, the nation’s most coveted individual football honor, heads a team that includes nine players who earned first or second team All-America honors last fall, including six first team selections.

Aguayo, who set an NCAA single season mark for points by kicking (157), was the 2013 winner of the Lou Groza Award, given annually nation’s best placekicker. North Carolina’s Switzer tied an NCAA record with five punt returns for touchdowns, while UVa’s Harris led the nation in pass interceptions with eight. Florida State’s Erving was named the winner of the ACC’s Jacobs Blocking Trophy last fall, given annually to the league’s top blocker.

Jackson and Miami running back Duke Johnson (Miami, Fla.) are the only returnees from last year’s preseason All-ACC squad.

The 26 members of the preseason All-ACC have combined to be named  this month on a total of 62 preseason watch lists for major national individual awards including the Outland Trophy (6), Nagurski Trophy (11), Bednarik Award (11), Maxwell Award (6), Lombardi Award (11) and Walter Camp Award (6). All three of the wide receivers and linebackers on the team were chosen for the Biletnikoff and Butkus Watch Lists, respectively, and all four defensive backs made the Jim Thorpe Award Watch List as well.

While the Seminoles led with nine selections on the team, Duke, picked to finish second in the Coastal Division this year by the media in its preseason order of finish, landed four players on the squad, followed by Clemson and Virginia Tech with three players each; Miami with two and Boston College, Louisville, North Carolina, Syracuse and Virginia with one honoree apiece.

Winston, who led the nation in 2013 in pass efficiency and threw for 4,057 yards and 40 touchdowns, is joined in the backfield by Johnson of Miami, who ran for 920 yards and a 6.3 per-carry average in less than eight full games, and FSU’s Karlos Williams (Davenport, Fla.), who racked up 730 yards and an 8.0 per-carry average while sharing the Seminoles’ tailback position.

Winston was named on 97 of the 99 ballots collected, the most of any of the honorees with Beasley (96) and Johnson (95) not far behind.

Wide receivers Crowder and Florida State’s Rashad Greene (Albany, Ga.) are two of the 11 first-team All-ACC players who made this year’s preseason team and are joined by Louisville’s DeVante Parker (Louisville, Ky.). This trio of wideouts combined for 239 receptions for 3,373 yards and 29 touchdowns. They are joined by versatile Florida State tight end Nick O’Leary (Palm Beach, Fla.)., who had 33 catches and seven TDs for the Seminoles.

In all, 21 of the 26 players selected to this year’s preseason team earned first-, second- or third-team All-ACC honors last fall, and that doesn’t include Louisville’s Parker who earned first-team honors in the American Athletic Conference.

In addition to Crowder, Tomlinson and Cash, Duke was represented on the team by linebacker Kelby Brown (Matthews, N.C.).

Clemson leads the defensive unit with all three of its honorees on that side of the ball in Beasley, defensive tackle Grady Jarrett (Conyers. Ga.) and linebacker Stephone Anthony (Polkton, N.C.).

Two of Virginia Tech’s selections were on the defensive side as well with defensive tackle Luther Maddy (Delray Beach, Fla.) and cornerback Kendall Fuller (Baltimore, Md.) joining punter A.J. Hughes (Terra Haute, Ind.) on the squad. Fuller was the ACC 2013 Defensive Rookie of the Year and was a consensus first-team Freshman All-American. 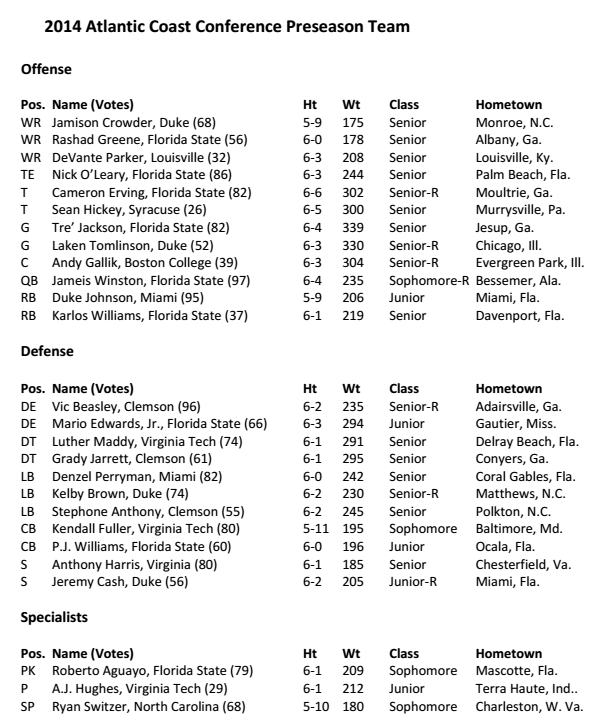