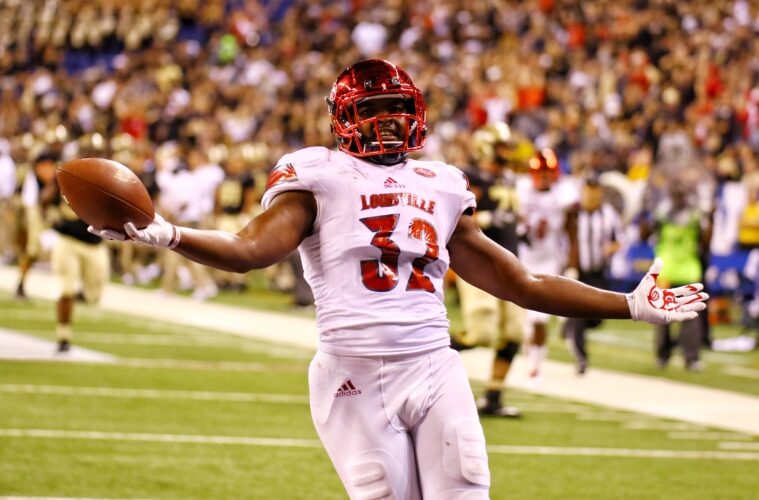 It’s a surreal enviornment in college football when the losing team’s fans are celebrating like they won the game and the winning team’s fans look like they’ve seen a ghost.  Such is life for Louisville football fans following its 2017 season opener.

Is it possible to be disappointed in a loss? As Bobby Petrino said, “We’ll take it.”  But Cardinal fans (and the entire nation really) ignored a lot of the warning signs that pre-dated UofL’s late season collapse in 2016.  Now those warning signs are squarely in play 9 months later and a team that most expected was not ready to take on the Louisville Cardinals took UofL to the wire in the 4th quarter.

Hats off to Purdue and Jeff Brohm (& Co).  Brohm is from the lineage of a great football family and played for the ultimate underdog coach Howard Schnellenberger.  But even “The Pipe” had adjustment years before his teams were capable to challenging the upper echelon opponents.  Brohm did it in a single off-season.  Where will Purdue go from here?  It’s hard to say, but if they play with the effort & energy that they did last night in Lucas Oil then they’ll make great strides in 2017.  Really rooting for the Brohm’s in West Lafeyette beyond today.

Now back to Louisville…….. are they who we thought they were?  Is Louisville ever going to get back to being the formidible and explosive team that forced its opponent to scrap its game plan in the 2nd quarter?  Or…. have they been figured out?

LACK OF A RUNNING BACK

The Boilermakers defensive game plan was simple:  Louisville doesn’t have a running back until they prove that they have one.  Purdue defenders didn’t follow any deception from Lamar Jackson in the running game and the Boilermakers essentially were committed to just not allowing Jackson to have room  whether he had the ball or not.  As a result the Cards ran 33 times (of 79 total plays) for 146 yards and running backs accounted for 11 carries and 42 yards.

This is not a set-up where Louisville can succeed long-term.  UofL’s opponents simply will ignore the running back threat in the zone read and Petrino may as well elect to just run straight QB runs without stalling with the obligatory fake handoff.  By not having a consistent viable threat out of the backfield in the zone read game at the RB position Lamar Jackson just simply can not be as explosive in the run game as we’ve witnessed in the past.  Still Jackson had 21 carries for 107 yards….. but just 5.1 yards per carry isn’t what you’d expect AND 21 carries for Lamar is A LOT.   In games that Lamar Jackson has 19+ rushes Louisville is 5-5 (5 wins in 10 games).

Jeremy Smith had 5 carries for 8 yards and a fumble.  That’s just not going to cut it and given Jeremy’s history of fumbles Bobby Petrino just simply can not trust his senior running back with a heavy work load. Malik Williams did not get a single carry vs. Purdue, obviously media is not in practice but, it’d be nice to see what Malik could bring in the running game.  Also Colin Wilson dressed out in uniform vs. the Boilermakers hopefully his conditioning and broken hand are rounding into form.  If nothing else, perhaps Petrino could try some Traveon Samuel in the backfield…….  Louisville needs to find answers at Running Back the coaches can simply not afford to accept the current status for the sake of its season and the sake of its dynamic quarterback.

Louisville lost 22 fumbles a year ago.  It was the most in college football since 2012.  On Saturday in Lucas Oil the trend continued.  Purdue only forced 1 fumble all of last season…… THEY FORCED TWO vs. Louisville.  Purdue’s Ja’Whaun Bentley forced 2 of the 3 lost fumbles (other was unforced) DOUBLING Purdue’s forced fumble output in a single game.

Louisville Tight End/Fullback Jordan Davis had missed practice time and was out of position and essentially forced fumble #1 for the Cards on the opening drive.  Lamar Jackson was credited with the loss of possession FROM THE ONE YARD LINE.  That can not happen.  This is how you lose games.

Later in the 2nd quarter Louisville had a Jaylen Smith TD overturned at the goal line and Jeremy Smith fumbled once again on the ONE YARD LINE.  That can not happen.  This is how you lose games.

As a result Louisville was 6 of 8 in the Red Zone with both unsuccessful trips doomed by lost fumbles.

Later in the 3rd Quarter the Cards trailed 14-13 and needed a play……and this time is was Jaylen Smith losing the football.  Purdue was take the short field and score a touchdown extending the Boilermaker lead 21-13.  Can’t happen.  This is how you lose games.

It’s hard to say how much MORE EMPHASIS can be placed on ball security.  But clearly UofL Football has not fixed the problem.  Currently UofL is on pace for 39 fumbles lost in 2017.  There were 5 teams that lost 3 or fewer fumbles IN 2016…. Louisville already has 3 lost in a single game.  It will hard to get behind Louisville in any college football playoff discussion if this continues.

You want positivity?  Here’s some.  Louisville’s Offense didn’t commit a single penalty once the ball was snapped. Now here’s the breakdown of Louisville’s 10 false start penalties .

The good news is that Bobby Petrino and Mike Summers know what they need to work on.  When Lamar Jackson was asked about 1st time starter Robbie Bell: “I feel he did pretty good, he just has to hike the ball sometimes.”  It’s a pretty telling quote for the redshirt freshman and Bobby Petrino said that Bell had trouble hearing the cadence.  Getting game experience will no doubt help Robbie Bell and the rest of the offense get adjusted to the cadence and rhythm of the snaps….. but 10 false starts has to be some kind of a record.

One of the false starts by Charles Standberry occurred after reviewed of Jaylen Smith TD was overturned at goalline.  Jeremy Smith then fumbled following a 5-yard run. The fumble may not have occurred if not for the false start two plays prior.

In the end Louisville had penalties on 6 of its 14 drives.  That number needs to be halved next week vs. North Carolina.

COVERING THE TIGHT END/DEFEATING BLOCKS ON THE OUTSIDE

Purdue had success with its tight ends Cold Herdman & Brycen Hopkins.  The Boilers were able to really sustain drives and made a few really nice plays with its tight ends.  Louisville struggled in games vs. good tight ends a year ago so this will be an area that will need to be watched throughout 2017.

Tackling on the outside and defeating blocks was OK.  This is the bread and butter of North Carolina and Clemson.  We’ll see how long Louisville has to play without Jaire Alexander, but I’d like to see UofL’s corners play a little more tightly in situations and not give up the easy catch and run so easily.  It’s a minor gripe, but the competition level is about to notch up.

Louisville had 23 plays of 40+ yards in 2016 (14th in country).  The Cards had ZERO 40+ vs. Purdue.  Dez Fitzpatrick had the longest play of the day at 39 yards. We spoke about UofL getting hemmed in in the running game earlier so probably shouldn’t harp on this too much.  However, UofL was scary in 2016 because the Cards could pop off at any time.  They didn’t last night.

Traveon Samuel just before halftime HAS to be aware of time and situation.  The Cards had two timeouts and moved into field goal range but Samuel relied on his instincts to get more yardage and the Cards really needed those 3 points at the time.

Purdue had a lot of drops and the turnovers helped. Stacy Thomas’ Pick 6 really was the difference in the game, TreSean Smith’s INT was timely in the endzone and Chucky Williams INT sealed the game.  Additionally Purdue’s 4th quarter kickoff return out of bounds by KeyRon Catlett at the 4-yard line was huge and made a comeback even more difficult.  Purdue had their share of mistakes.

Folks can talk about the pre-snap penalties all they want, that’s fair.  But UofL didn’t allow a single sack vs. Purdue.  THAT IS HUGE.

Have to be encouraged by the wide receivers after losing Jamari Staples & James Quick to come out and really get involved consistently in the passing game.  Jaylen Smith had 8 catches for 117 yards and nearly had a TD.  Seth Dawkins set the tone early, Traveon Samuel was involved throughout and Dez Fitzpatrick made big plays in clutch time.